Bruce Bialosky
|
Posted: Jun 03, 2018 12:01 AM
Share   Tweet
The opinions expressed by columnists are their own and do not necessarily represent the views of Townhall.com. 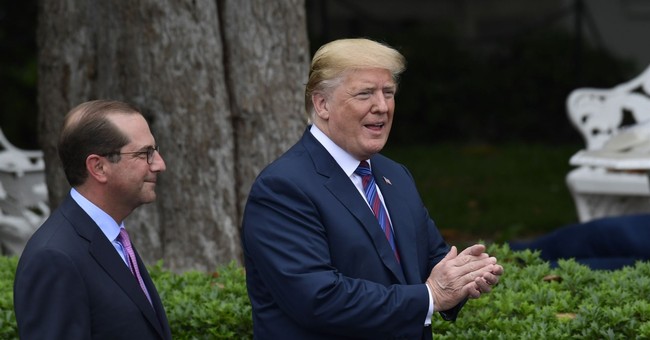 This past week a life-long liberal, Roseanne, tweeted a despicable comment that armed the Left in their war that has been going on since the day Donald Trump entered the political scene.  Anytime Trump makes a statement that questions the status quo and then he is deemed a racist and hater.  Not only that, he is unleashing the forces of hate in our country -- the haters being anyone who does not fall in line with their intolerant attack on anything Trump.

This unfolded once again when I received a letter from a “community leader” who reminded us of his 40 years of expertise sniffing out haters.  Everything he has written since the Trump election has been viciously attacking Trump.  It does not matter that some disgusting human drew swastikas on 200 headstones in a graveyard – it is Trump’s fault.  Trump said something this community leader does not like so let’s focus on that and by the way – Charlottesville.

His favorite technique these days is to quote a Never Trumper who is an ‘enlightened Republican.’ This time it was Michael Gerson who writes for the Washington Post and does so because he is a Never Trumper. The title of his piece was “The Trump Era is a Renaissance of Half-Wit Intolerance.” That is a shining example of intolerance. The column was largely about the hapless campaign of Don Blankenship in West Virginia.  Remember, that we were being told up until the day of the election that Blankenship was surging and would possibly win the Republican nomination for the U.S. Senate seat.  You know -- the man Trump trashed, but the MSM did not like how Trump trashed him.  The candidate who came in a weak third.

This is the shining example of intolerance bred by Trump.  Just like he bred Roy Moore in Alabama, despite supporting his opponent in the primary.  Gerson makes this wildly incorrect statement: “Yes, these are fringe figures. But they are fringe figures in a political atmosphere they correctly view as favorable.  In the Republican Party, cranks and bigots are closer to legitimacy than at any time since William F. Buckley banished the John Birch Society.”  Really? Every one of these people holding these questionable views has been roundly rejected by Republicans.

More importantly, where are the exposes on the candidates being fielded by the Democrats? Nowhere to be found.  The Left is winning primary after primary, but we don’t hear about their destructive positions and hateful comments.

I questioned the intolerance of this postulation and what was I met with – intolerance.  The response to my inquiry was met with this reference to Trump: “This man is temperamentally, intellectually, and in every other way unfit to be the president of the United States. He's a dangerous buffoon who manifests his disqualifying traits every day.”

“He's not good for minorities as he erodes the norms that have kept us safe for over two centuries, he makes a joke out of foreign policy, he stumbles through the complexities of the Middle East purporting to help Israel while he muddles up Syria and our position in the region.”

“He's a tragic joke as a president and deserves to be thrown out for his incompetence, let alone his craven venality in terms of self-dealing and self-enrichment. He will undoubtedly go down as the worst president in American history----he'll beat Harding and Coolidge and McKinley by miles and that's no easy task.”

Of course, the three worst are all Republicans even though two are well regarded and he never mentions Jimmy Carter or James Buchanan.

Please tell me what there is here supported by fact. It is a series of name-calling and innuendo.  But that is not anything new.  It is constantly resorted to - averting from any argument on the facts and never really substantiating their claims.  For example, Trump is enriching himself and so is Jared Kushner.  Where are those facts?

I laughed when I received an email that Trump had pardoned Jack Johnson. The Black heavyweight champion.  Our first Black president (Clinton) did not pardoned him nor did our first half-black president (Obama).  How would they twist this coming from the “bigot”?  Only Clarence Page of the Chicago Tribune wrote a column giving Trump credit and chastising his predecessors for not properly pardoning Johnson.

Concurrent with this episode, I was trolling through the Twitterscape when I came upon someone quoting Jeff Greenfield attacking ICE for separating children from their parents while they are coming to our border and seeking to enter our country without going through a legal process.

I wrote a simple reply “You would think everyone is innocent here?  Parents illegally enter this country with their kids in tow looking at using them as anchors and we are the ones who are wrong? You have some misguided ideas here.” I was met with this by Mr. Greenfield “Moral Idiocy.  I am blocking you.”  Nothing like defending your position and being open to debate.

I like making people look uninformed by dismantling their positions with facts and debate.  Greenfield does not believe he has to do that anymore.  Nor did any of the Twitterheads who attacked me.  One said I did not understand what an anchor baby was.  I guess that person did not read my column on anchor babies and is not capable of discerning between an “anchor” and an “anchor baby.”  I am presuming that the people attacking me do not understand that the people crossing the border are attempting to use their children as a means to stay in the U.S. (Please refer to NYT article stating such).  Call them an anchor or call them a cookie, that is what they are doing – using innocent children (often not their own) as a basis to illegally enter the country.

I was called names (profanity included) but they never argued against my statements -- because there is no argument.  Because they don’t think they need to argue facts. They can just state we are intolerant. Of course, all children entering are infants and all parents are seeking asylum.

I will leave you with this.  On our recent trip to Russia, the visa service screwed up the timing of our visa causing us to depart Russia earlier than planned.  You know what we did – we left.  We did not want to find out what Russia does to people who overstay their visas.

When reentering the U.S., we had a little trouble with our global entry.  The border enforcement person helped clear that up and then asked us about our trip to Russia.  I told him about the visa debacle and stated, “Can you imagine if we actually enforced our visas?”  This bigoted, racist (he was Black) just laughed and rolled his eyes.