Bruce Bialosky
|
Posted: May 06, 2018 12:01 AM
Share   Tweet
The opinions expressed by columnists are their own and do not necessarily represent the views of Townhall.com. 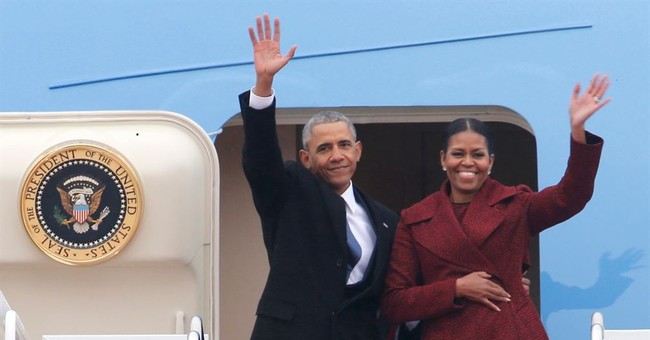 One would have thought that once President Obama left office his charade of never doing anything illegal or having a smidgen of corruption would be exposed.  Yet nearly 18 months later, he has found new enablers to continue his destructive policies that have no basis in law.  This past week reiterated that situation.

As I have defined before, once Obama lost the majorities in the House and Senate in January 2011, he did not abandon his desire to fundamentally remake our country.  He just adopted a new strategy.  With the help of political appointees who were true believers and career employees that harbored similar attitudes, he enacted his new plan of attack.  Obama crafted executive actions that were clearly not within the law, but did it anyway. He then thumbed his nose at his opponents saying – come get me; I will use your money via the federal government to defend my lawless actions until a court overrules me.

The two central policies that he enacted were DACA (Deferred Action for Childhood Arrivals) and the Iran Deal.  As you know, DACA was done by executive order after multiple statements of the fact by Obama that he could not take such action because he had no authority.  The Iran Deal was never approved by the U.S. Senate as all treaties with foreign entities must be.  Obama did take it to the United Nations for them to ratify with some believing somehow this is a lawful agreement for our country.

The newest enabler of Obama is U.S. District Judge John Bates who stated the decision to phase out the program was “arbitrary and capricious because the Department of Homeland Security failed adequately to explain its conclusion that the program was unlawful.”  I know this guy was appointed by George W. Bush, but he either is unfit to make decisions of this kind or has lost his mind.  His response is almost akin to asking someone “When did you stop beating your wife?”

Maybe Judge Bates can explain to us laypeople how the law is different for DACA participants than it was for DAPA participants.  If the DAPA action was ruled illegal, why would the DACA action be deemed legal?  What is the difference between the parents and their children?  Why does a president now get to make laws instead of the Congress?  These are simple questions that the Judge should be able to answer instead of using the old standby “arbitrary and capricious.”  Quite frankly that is lame.

Then we had the double onslaught of the French and German leaders coming to lecture us on why we should not abandon the Iran Deal.  I certainly do not expect Macron and Merkel to insist we follow our own constitution.  But they are not stupid people and they know we have a process and Obama circumvented it.

Macron and Merkel know -- just as the supporters of the Iran Deal in the U.S. do -- that since the implementation of the deal the Iranians have been on an international rampage.  They have attempted to create a hegemony across the Middle East.  Their support of the war criminal Assad in Syria is just the tip of the iceberg.  They have funded Hezbollah and Hamas who are waging war in Syria and against our allies.  They have denied they provided rockets to the Houthis in Yemen against another ally of ours, Saudi Arabia, but that is doubtful.

As for the nuclear aspect, they have done everything except launch a bomb.  The deal itself restricts such little nuclear activity.  It only restricts the aspect of nuclear centrifuges.  Iran launched ballistic missile tests and asserted it was not covered by the treaty. They may actually be correct about that fact and that is the problem.  One would have to ask why are you testing ballistic missiles unless you intend to deliver nuclear warheads with them?  And as defined by the information released by the Israeli government this past week, the Iranians have lied about their actual intentions for over a decade.  Only fools believed their assertions anyway.

But let us assume that the deal is going swimmingly as some assert.  David E. Wade, chief of staff at the State Department while John Kerry was negotiating this deal, recently stated in a column: “The Tehran regime eliminated 97 percent of its uranium stockpile, removed and destroyed the core from its Arak reactor, blocked production of weapons-grade plutonium, ripped out more than 13,000 centrifuges, halted all uranium enrichment at the underground Fordow site, and implemented the gold-standard of verification. Tehran is complying, and Iran is crawling with inspectors.”

These statements are disputable because the inspectors are restricted from many sites, including Iran’s military sites.  If you accept all of these assertions and this agreement is working, then I have a simple solution: legalize it.Get it approved by the U.S. Senate.  You might say that is just silly because it will not pass the Senate.That is true. It would not pass the Senate in 2015 either despite all the efforts of Obama; thus, the end run around the U.S. Constitution.

These are dangerous precedents being set.  The Democrats in Congress should really analyze what they are doing.  They are ceding power to the presidency that they may regret at a future time.  For example, something Trump does they don’t like.   These are not only bad decisions; they are bad for our republic.