The Treachery of Murkowski, Collins and McCain

Bruce Bialosky
|
Posted: Aug 06, 2017 12:10 AM
Share   Tweet
The opinions expressed by columnists are their own and do not necessarily represent the views of Townhall.com. 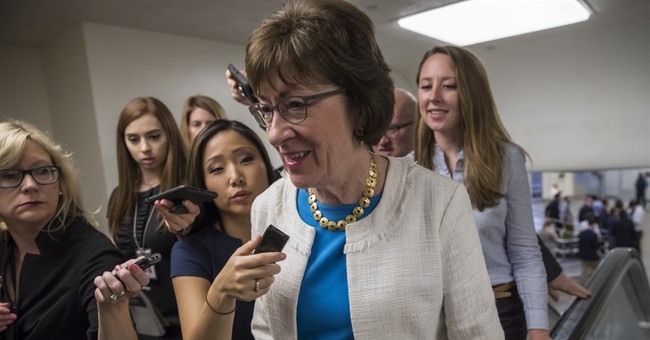 Previously, we have written how important it is to restructure our health insurance system after the dishonest, unnecessary and destructive law passed by a fully-partisan vote known as Obamacare.  We have defined the fact that this is a team effort by Republicans which would orient the insurance market back toward consumer choice and save us from a downward spiral toward government control over the entirety of our healthcare system, handing over the future of our individual health to faceless know-it-all bureaucrats.  Yet despite that, three senators -- Murkowski, Collins and McCain -- vainly thought they were wiser than everyone else and sentenced us to destruction of choice in the health insurance market.

Murkowski’s rationale seems similar to the statements by the other two.  She told an Alaskan newspaper "I have said pretty consistently that process really does matter, particularly when you're dealing with something that is as direct and personal as health care, something that has an impact on one-sixth of the nation's economy."

But Murkowski opposed every proposal by the Republicans.  She offered no statements of how to accomplish her goals or a health insurance plan of her own.  She did not offer the fact that she, through the Democrats in committee, would responsibly cooperate to move a revision of Obamacare forward.  Her office did offer a series of changes in a 2015 press release to Obamacare that she publicly supported.

It seems bewildering that Murkowski would publicly attack Obamacare to shore up her political support for her 2016 re-election; but, given the opportunity, would be a pivotal vote to maintain the existence of this plan.  It became public that the Trump Administration pressured Murkowski with potential withdrawal of benefits to her Alaskan constituents.  We don’t believe she was so small as to vote against the repeal to spite President Trump because of his political pressure.  She failed her fellow senators, her constituents, and the American people thinking that she knew better than everyone else except for her co-conspirators.

Collins stated as her defense for her no vote "The ACA is flawed and in portions of the country is near collapse. Rather than engaging in partisan exercises, Republicans and Democrats should work together to address these very serious problems."  But she too offered no evidence that she could even get her fellow Maine Senator, Angus King, who bills himself as an independent while showing in every way he is a Democrat, to agree with and work with her.  Collins offered no means for her statement to ever become reality.

During the entire process, Collins expressed her wiser-than-thee attitude   The thing Collins tied herself to was Planned Parenthood.  Thus, she thought the salvation of one health care provider is more important than cost-effective health insurance provided in a free market for all Americans.

Then there is Senator McCain.  First let us say McCain is an American hero and everyone wishes him well in his fight against a deadly cancer.  That being said, health issues do not excuse his abhorrent behavior in voting against the bill the rest of his fellow Republicans supported and saw as a means toward a route to eventually overhaul of the health insurance market.

In 2016 during his reelection campaign, McCain made the failure of Obamacare a central point of the rationale for supporting him.  From his campaign ad: “Obamacare is failing Arizonans. First, a massive rate hike more than twice the national average. Then, America's largest health insurer abandoned Arizona's failing Obamacare exchange. That's devastating -- especially to rural counties. Congresswoman Ann Kirkpatrick bragged about her Obamacare vote, saying ‘it's also the one I'm most proud about.’ While Kirkpatrick's ‘proud’ of putting us at risk, John McCain is leading the fight to stop Obamacare.”

Certainly one can be against Obamacare and unhappy about the plan for replacement.  There is a humongous difference between being unhappy with the current proposal that everyone understood was not the final product, and being the person responsible for putting a stake in the heart of the effort to save us all from a government-controlled health system.

McCain, being a veteran and a senator from the state that was ground zero for the crisis in the VA medical system, should have complete understanding of how inept government-run health care is for just a small portion of the population.  He must understand the concept of extrapolating that failure out to the remainder of the population would be catastrophic for America.  Yet, he single-handedly decided to maintain failing Obamacare as the means for Americans to get their health insurance.

Some have asked the logical question of why did McCain even return to D.C. to extend the process only to kill it.  He could have stayed in Arizona recovering from his recent procedure.  Did he crave the limelight that much?  Or did he really just not understand where the process was heading and had a last minute epiphany?

McCain stated "We must now return to the correct way of legislating and send the bill back to committee, hold hearings, receive input from both sides of aisle, heed the recommendations of nation's governors, and produce a bill that finally delivers affordable health care for the American people. We must do the hard work our citizens expect of us and deserve."  Maybe he sees a path to that accommodation by the Democrats others do not see (including Democrats).

McCain has had plenty of time to work the crowd before his vote to accomplish some of his goal, but to no avail.  His political capital from his potentially deadly cancer did not convince one Democrat to cooperate in a process allowing them to amend the bill.  When does he think that will occur?

In the imaginary world of these three senators, the matter will go back to committee and there will be more discussion.  The Democrats will cooperate.  Of course, that is under the following conditions: more federal dollars are funneled into a Medicaid system that offers the promise of health insurance without health care from an ever-shrinking pool of providers, young Americans will buy the insurance which they, to this point, have decided they would rather pay a fine for no insurance because the policies they are offered are too comprehensive (thus too expensive) for their needs,  and money will be shuttled out the back door of the U.S. Treasury to the insurance companies to subsidize the underpriced policies of other Americans because the real costs are far too burdensome.  That will end with more threats and penalties and mandates administered by the IRS to force people to comply with government dictated comprehensive policies to shift costs to others.  How do we know this?  Because Ezekiel Emanuel and Jonathan Gruber, the original designers of this disastrous program, tell us if we only did these things Obamacare would work.

In fact, the first proposal by Democrats, after the treacherous act, is to lower the age for Medicare eligibility to 50 years old.  Medicare which is required for anyone that is age qualified.  That proposal would do wonders for soaring the out-of-control budget.Instead because of the three wisest people in America, we will be harnessed with this dysfunctional system waiting for an imaginary cooperative moment between two political parties with two distinctly different agendas and two distinctly different end games.

It did not happen eight years ago and will not happen now.  Instead because of the actions of these three senators who are wiser than all of us, we have moved ever so much closer to the Democrats end game of a single-payer, government-controlled health system.

That is the treachery of Murkowski, Collins and McCain.