Bruce Bialosky
|
Posted: Apr 24, 2016 12:01 AM
Share   Tweet
The opinions expressed by columnists are their own and do not necessarily represent the views of Townhall.com. 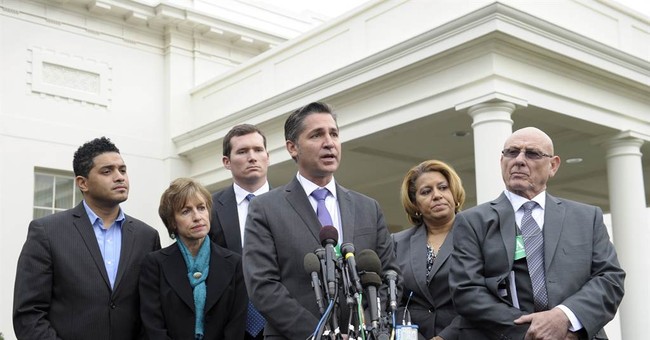 President Obama has had enough with Congress not bending to his will regarding essential points in which he wants to contour the Second Amendment rights of citizens having guns. He started the year with a bang having his team scour the thousands of pages of federal laws to find “loopholes” they could fill. He proposed a new executive action to which we all must react.

Some of the proposals are innocuous or of the nature that do not create argument. Under the innocuous category is encouraging greater communication between the feds and the state governments regarding criminal history information. One proposal not too many would argue with would be the hiring of new FBI personnel to conduct background checks. The environment that Obama has created encouraged an enormous increase in gun purchases; thus, most gun owners will be happy with getting clearance faster except, of course, the criminals who get rejected.

These proposals sparked a discussion regarding background checks. The anti-gun people keep talking about the internet loophole and the gun show loophole to which I was saying that I far as I know there is no such loophole. Number One Son stated if that many people keep commenting about this there must be something to it. He suggested it was my obligation as a journalist to speak to a gun control group and get their view. I followed his suggestion and contacted the Brady Campaign.

The Brady Campaign to Prevent Gun Violence was founded in 1974 as the National Council to Control Handguns. It was later renamed after White House Press Secretary James Brady who was shot during the assassination attempt on President Reagan. Brady later served along with his wife as Co-Chair of the group. I had multiple discussions with their press representative who provided their information regarding background checks.

The Brady Campaign forwarded to me a study that I looked at for about a minute and dispensed with it because it was done in 1996. They also sent me some other information about more current work being done by Dr. Deborah Azrael, who is at the School of Public Health at The Harvard University. I emailed the good doctor and then had a free flowing discussion with her about gun rights, background checks and her studies. I think it was fair to say she thought she was not against gun ownership, but wanted greater protection from guns being acquired by irresponsible people and she was gravely concerned about the amount of deaths by guns in America -- particularly suicides.

Dr. Azrael stated her studies show only 67% of guns were sold. Of those she said 70% went through background checks. The remainder she stated were acquired through gift, inheritance or trade. Reconfiguring my math to meet her study, I stated that still means over 9.9 million guns were sold without background checks. Azrael questioned my math and said her study could not be used to project out to the entire population. I replied that her statistics were being used as such by the anti-gun lobby, so why could I not extrapolate out from her numbers?

We went on to focus on two points. Since she said she was not anti-gun, the first question I asked was whether she realized she was being used as a tool for the anti-gun lobby. I also pointed out I felt the entire effort was a lazy attempt to deal with gun violence. It is akin to what I tell my clients when asked how they were chosen for an audit after vowing they are in compliance with the law and filed their tax returns timely. I explain that the IRS is lazy. Going after non-filers and real tax cheats would be hard work. They would have to hunt them down. It is much easier to pick on a complying taxpayer they can identify easily from their filings and try to pick up some revenue from small aberrations in their returns.

In the same regard the anti-gun lobby is lazy. Putting further restrictions on law-abiding citizens in how they acquire guns, what guns they own and the ammunition they acquire is lazy. Sure it may save a few deaths and maybe change the mind of someone who wants to commit suicide, but it will strike very little at the excessive gun violence in this society done by the criminal element. A perfect example is the proposals to criminalize the gun owner for the non-reporting of a stolen gun instead of punishing the thief.

The other thing I asked Dr. Azrael (and went back to the Brady Campaign multiple times and received no answer) is about the lack of change that is being asserted in the number of background checks. If Azrael was producing similar numbers of guns going through background checks in 2016 as in 1996 then hasn’t the anti-gun lobby been ineffective? i.e., all the organizations and all the money spent to enhance background checks and no change? My suggestion would be they should reconsider wasting people’s money if they have been that lame. But more likely I think they are just using scare tactics to whip up more fundraising from the unknowing.

As we stated, President Obama has used this as an attempt to force laws down the throats of the American people. The president has said in effect ‘if you don’t like what I did then sue me. You have to have the standing to sue me and the money. I have your money and I will spend it how I want to defend my lawless action.’ No change here until January 20, 2017.