Hillary’s Dance with The Devil

Bruce Bialosky
|
Posted: Jan 31, 2016 12:01 AM
Share   Tweet
The opinions expressed by columnists are their own and do not necessarily represent the views of Townhall.com. 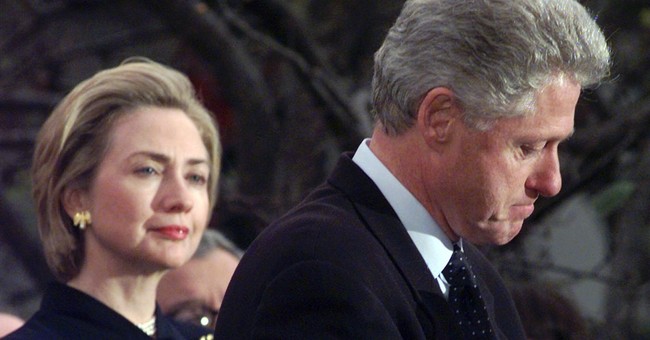 Ms. Clinton has placed at the core of her campaign the fact that she is a woman and that it would be so nice to have a woman in the White House. As in any presidential run it is fair game to analyze whether that precept represents something Americans should vote for when they go to the ballot box. That makes the relationship with her husband Bill Clinton a matter for discussion.

Let’s make this clear from the start; Bill Clinton’s support by Democratic women like Debbie Wasserman Schultz is based on him being a supporter of the pro-abortion orthodoxy. If he were anti-abortion any woman on the left who brands herself as a supporter of “women’s rights” would have tossed him over the side years ago. Though his transgressions are seemingly not as numerous as the accusations against Bill Cosby, they are certainly as significant in their nature and just as misogynistic.

It is said American voters have a short memory so let us review what occurred and still matters today, particularly because of her candidacy. Whether or not you believe Mr. Clinton’s behavior rose to the level of being impeached (he was impeached for lying; not sex), his treatment of women was deplorable. This is a man who used his position of power to take advantage of women sexually. This is a man who totally disrespected his marriage and the woman he was married to for his own sexual pleasure. This is a man who could not control himself enough that he had sex with an intern in the oval office. This is a man who gave the idea to a generation of young Americans that oral sex was not really “having sex,” thus encouraging underage Americans to participate in sexual activity as if there were no consequences. But Mr. Clinton is not running for president; the wife he abused is doing such.

Ms. Clinton never expressed her hurt or distaste for the man who turned his back on her marriage or publicly scolded him for his obvious contempt for her, his wife. She not only defended him, but she attacked the women who were abused by him. It is one thing to neither publicly attack him nor walk away from him, but to accuse the women he abused for his own personal satisfaction of victimizing her husband was insulting not only to those women, but to all women. How could she stand up for mistreatment of women in the workplace when she sold out to achieve her own personal aggrandizement? Her lack of credibility on this issue means she would move along the rights of women in this society less than Barack Obama did for Blacks -- and that is a very low standard.

That does not mean to say that anyone should toss their marriage over the side because of a single indiscretion. Each situation has to be evaluated based on the facts and circumstances involved. When you have a serial philander like Bill Clinton, to accept his behavior and defend him is beyond the pale. To attack the women taken advantage of and defend the behavior for which any chief executive in America would be fired does not deserve validation.

To focus on this issue does do a small injustice to this campaign. After all, without ever dealing with this issue there is still a mountain of reasons to not support Hillary in her campaign to be president. Her recent book “Hard Choices” is a road map to defeat Hillary just like “Earth in The Balance” was a road map to defeat Al Gore in 2000. Ask her to cite one country in which our relations are better today than when Mr. Obama took office. The only one might be Turkey, where Erdogan has eliminated many freedoms in his country while turning it from an open democracy to an Islamic state. Unless you include Cuba and Iran, most of which happened after her term, for what that is worth. Clinton was there at Obama’s shoulder helping to design this smoldering world.

The point is if there should be the first woman president and someone who makes that her hallmark then it should be someone that actually represents an advancement for women. I can think of someone who started her own business, raised two children, participated in her community and maintained her integrity in dealing with her marriage, never perverting her principles just to advance. She would make a great president. She never sold her soul to the devil for the sake of power and money like Hillary has done. She would be a model of the modern woman for all Americans and for women’s rights worldwide.

You may find a reason to vote for Hillary for president, but being a woman is not one of them.