Say It Ain’t So, Pope 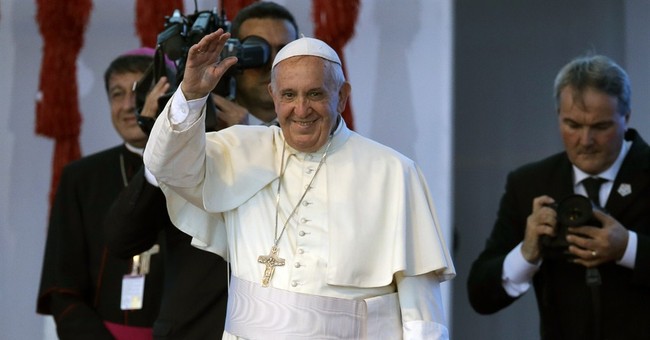 Recently we had a rendezvous with my daughter’s future roommate (plus her mother and her mother’s best friend). The roommate is moving to Los Angeles from New Jersey after graduating from college. When we met the mother and her friend, they were both prominently wearing crosses on necklaces. We felt much more comfortable about the future of our child’s new living arrangement. They were delighted to find out we were committed Jews.

I spend extensive time discussing with people who adhere to different denominations of Christianity. I am still befuddled by the varieties of Protestantism and I am confident I will never get it down as hard as I try. I rarely, if ever, criticize someone adhering peacefully to their religion. At this juncture I feel compelled to criticize this Pope (Francis) because he has crossed over into my area – public policy – more than sticking to healing the faithful of his religion.

That is not unfamiliar territory for Jewish Republicans. We experience this often from rabbis, due to the fact the vast majority of rabbis are people of the Left. They feel compelled to express their left-leaning beliefs from the pulpit, while Republicans often cringe at High Holiday services as we endure an onslaught of leftist mantra in lieu of a lesson about the Torah. As important as that is to us, it pales in comparison to the magnitude of the comments from our current Pope.

There is no doubt that Pope Francis came to his defined point of view after being shaped by his life experience in Argentina with its deeply-confused political structure. One might think that he would reject left-wing politics, having experiencing firsthand the failure of Argentina’s socialist-leaning governments. Instead he appears to have Paul Krugman, the befuddling economist and columnist for the New York Times, as his guiding light. Francis like Krugman seems to think that every failure of invasive government and restriction of capitalism is an excuse to double down with the mantra that the problem is government has not gone far enough.

First, Pope Francis issued an encyclical regarding climate change. I must stop here and cite that anyone who uses the terminology “climate change” is just downright silly. No one in their right mind does not understand that the climate is fully in flux at all times. The significant changes in the environment are not only outside our control, but beyond the scope of worldly endeavors as matters in our solar system and beyond, have grave effects on our climate and its ever evolution. I am more an adherent of George Carlin (certainly no conservative) who can be seen here (https://www.youtube.com/watch?v=BB0aFPXr4n4). I also have interviewed multiple real climatologists who question the models used to calculate these ‘severe’ weather changes either because of their inability to replicate the models or the fact that the models have been so divergent from actual experience.

But the bigger problem I have with Pope Francis generates from his comments on economic policy. You may know the Pope recently went to South America. Other than doing normal Popely duties he delivered a dissertation on economics. He chose to deliver these comments in Bolivia, which as a country is following in the footsteps of Venezuela. Bolivia is ranked as the 163rd freest country in the world out of 178 countries on the list. The President, Evo Morales, has been in office since 2005 and has no plans for retiring. Bolivia is rich in natural resources and oil, but has produced South America’s poorest economy with average daily earnings of $2. Morales has expropriated more than 20 companies.

The Pope railed against a system that “imposed the mentality at any price, with no concern for social exclusion or the destruction of nature.” That is a turning of a phrase that any Marxist would be proud to have stated. This speech followed comments from President Morales wearing a jacket from his mass-murdered collection which was adorned with a picture of Che Guevara.

The Pope even invoked the true enemy in describing capitalism when he quoted a 4th century bishop by saying it was the “dung of the devil.” Wow, what would he call the mass murdering societies of National Socialism and Communism? Certainly, capitalists do bad things, but to be so ignorant as to not understand that more people have advanced through democratic capitalism to a quality and healthy life than through any other form of government just reeks of prejudice and denial.

This Pope does not understand how wealth is created. That very wealth feeds his church and keeps it solvent. He also does not seem to understand that capitalism breeds believers in the fruit of the divine. Does he really believe that the alternatives are not aimed at destroying the church? In effect he is expediting his own church’s execution. Yes there are religious people who abuse capitalism, but more often than not the ones who adhere to capitalism’s true betterment of mankind our religious souls and the non-believers are the abusers.

On a trip to Thailand, we had to buy a suitcase to bring home all the inexpensive clothing we bought. But I focused on how great it was for the Thais that they had quality shoes and shirts and pants at affordable prices as part of producing lower-priced products for us. Capitalism has moved in the past 30 years a few hundred million peasants in China and India from uneducated, barely-existing lives to a hope for the future where they are clothed and housed and educated.

That is us capitalists, Pope Francis, Not Che and Evo’s socialist friends in Cuba and Bolivia. Sorry, sir, but you placed the devil on the wrong team. You may need to go back and study up on Pope John Paul II.