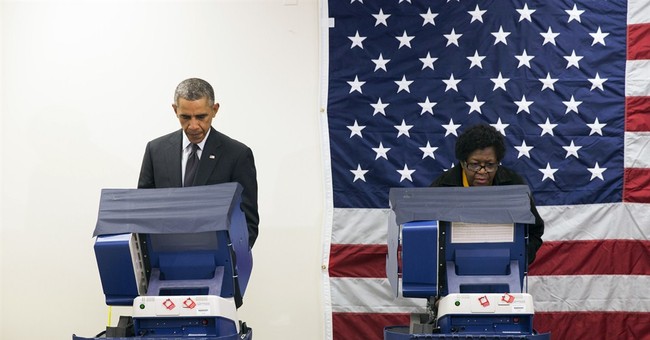 Attend any Republican Party enclave and at some point you will hear someone bemoaning that the difficulty of winning elections when Republicans are perceived as the “Daddy” party. The belief is that Democrats are perceived as the warm, loving Mommy party which provides for you and gives you things. The reality is that the discussion is miscast and the Democrats are really the Daddy party.

In the old days when we had families with a mother, a father, and some children, the roles of the family members were often set. The mother often stayed at home and confronted the day-to-day challenges and mischief of the children. When the children were particularly naughty, the classic line that clearly defined these roles was blurted out: “Wait until your father gets home!” The father was the hammer -- the ultimate enforcer. That is where the perception of Daddy laying down the law came from, even if the truth was that tough mothers did most of the rule enforcement.

This became ever so more crystal clear with the recent battle over corporate taxes. A little country on a cold, wet island decided that over 20% of their people being unemployed was just not working. These people stupidly decided that lowering their corporate tax rate to 12% might encourage big corporations to locate their operations in their little country. Low and behold, the foolish Irish began to see first a surge and then a flood of companies coming to their country and hiring their citizens in real jobs. This caused countries all over the world, including our neighbor Canada, to significantly lower corporate tax rates to compete in the worldwide marketplace for jobs. The lone holdout, and the country with the highest corporate tax rates (on average by 20%) in the world, is also the beacon of freedom and capitalism: the U.S.A.

Capitalist will be capitalist so seeing this opportunity American corporations decided to merge with foreign companies so their income from outside the U.S. was taxed at the lowest rates possible. An excellent way to solve this problem would be to lower the U.S. corporate tax rates and keep these companies bringing their money onto U.S. shores. Not the Daddy party. First, they come up with a nasty name for this maneuver (“inversion” – whatever that means) which Democrats love to do. Then they roll out President Obama and Treasury Secretary Lew to accuse these Americans of being traitors. They state they are going to (after the election) create rules that punish anyone trying to lower their tax rates by moving their operations elsewhere. Republicans touted plans to lower the rates and become competitive with those sly Irish. Positive encouragement is a nice thing.

Another example of Democrats being the Daddy party is their health care plan (Obamacare - ACA) which is riddled with penalties. A perfect example is that an employee cannot be reimbursed by their employer for their own health insurance even if their plan is qualified under the ACA. That means if you have three employees and all three have their own insurance with which they are happy and meets all ACA qualifications, you cannot reimburse them – you must have a group plan. If you do reimburse them it is a $100 PER DAY penalty PER EMPLOYEE. If you have a company plan and a senior employee is on Medicare, you can no longer reimburse that person for their Medicare supplementals. Seniors will just love that.

There are also the mass fines or asset confiscations that the government has been subjecting people or businesses to for the purposes of punishing them. The Democrats don’t like the big banks and are unhappy no one was thrown in jail because of the prime mortgage meltdown six years ago, forgetting this was caused by government policy. In lieu of being able to convict anyone, they have been strong-arming outsized fines. The most outrageous action was the $17 billion fine against Bank of America for the sins of Countrywide Mortgage and Merrill Lynch. Bank of America saved the government and maybe the economy back in 2008 by absorbing these two entities, but six years later the government steals this money from them and punishes them for their good deeds. Many times the Democratic Daddy party punishes people when they are not even the guilty. Remember being punished for something your brother or sister did?

When voting you can either vote for the party branded the “Daddy” party which does not want to hand out money indiscriminately and wants people to earn their way through life establishing an earned self-esteem, or you can vote for the real Daddy party who says do what we want you to do or we are going to fine or punish you until you submit to our will. It is a clear choice.