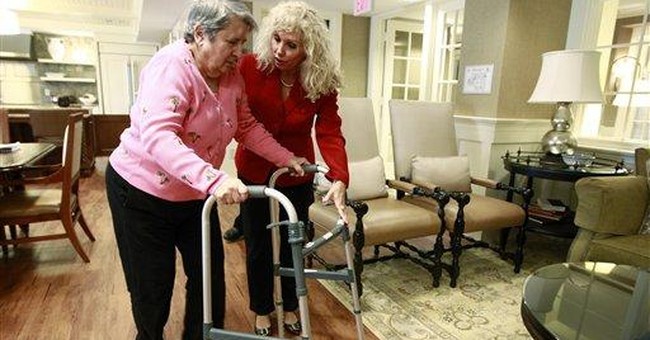 This column is article 2 of a two part series. Here is part 1.

The question became where Thompson and the producers were heading with their work? One could conclude that they made up their minds early on that they had an agenda. In fact, Rick Grimes from ALFA stated when he was interviewed by Thompson for the Frontline show that “I believe he came with an agenda, not just seeking facts.” Grimes’ association favors strong state regulation. When asked by Thompson why they favor state regulation, Grimes told him “That is where the people live. The states should regulate the industry. We have worked extensively with the states to enhance state regulation.” Mr. Grimes’ interview was never shown or published.

One that was published was the interview of Mark Parkinson, President and CEO of American Health Care Association and former Governor of Kansas. A large portion of the interview was oriented by questioning from Thompson about establishing federal regulation. Parkinson and his organization also favor state regulation. He stated “I really would think as a consumer, as a person whose mother-in-law right now is in an assisted living facility, I’m really more comfortable with this being handled at the state level than at the federal level.” In fact, the entirety of the interview with Mr. Parkinson was arguing for federal regulation.

In our interview of Patricia McGinnis, Executive Director of the California Advocates for Nursing Home Reform (CANHR), she stated she did not believe federal regulation would occur. But a significant portion of Thompson’s questions during her interview were oriented toward federal regulation. Professor Hawes, the chosen academic for the piece, was intimately involved in the establishment of national regulation of Nursing Homes. Her expertise lies more with the Nursing Home industry than Assisted Living, but she was involved in this piece based on her background.

We interviewed both Hawes and McGinnis and must say they were very cooperative. They both stated they refused to criticize the Frontline piece or Thompson for his work or state that the work distorted the view of assisted living. They both stated there was good work going on at the state level in regard to regulation, but it could improve. McGinnis particularly cited five states, which includes Ohio and Wisconsin, that have consumer information on websites regarding assisted living facilities in their states.

The Frontline show and the ProPublica column focused on certain cases that occurred where the oversight at Emeritus facilities was questioned. Granger Cobb of Emeritus stated “One incident is too many,” though he felt the show was extremely lopsided. Mr. Haffner stated “mistakes were made, but the focus on those mistakes without putting them in context was the problem with the piece.”

We interviewed Sheryl Zimmerman, Professor of Social Work and Public Health at the University of North Carolina and Co-Director of Program on Aging, Disability and Long-Term Care. Professor Zimmerman has done over 60 studies on assisted living since 1997. She stated “I was disappointed with how one-sided the Frontline piece was. It was an expose´ on one chain. Though I am not questioning the accuracy, there are many other organizations that provide a fine place for seniors.”

As to the case involved in the piece, she stated “We have done two different studies and reviewed similar studies that found families with members in assisted living communities have to spend more time being advocates and oversight because they are not primarily health care settings and nursing homes cost twice as much as assisted living.” Mr. Haffner echoed that “families have to the ultimate responsibility for the family member. The physician has to be involved in the assessment.” Haffner stated his organization does not admit anyone without a written assessment from a physician.

Assisted living has become a significant industry with over one million residents, compared to 1.5 million in nursing homes and one million in home health care. David Schless, President of American Seniors Housing Association, stated “Assisted living was driven by consumers who wanted a more residential setting that was more humane. The alternative is drugging individuals and strapping them to their chairs. Occasionally things go wrong in this situation. It was driven by how people were treated in nursing homes.” McGinnis of CANHR stated “I would say the same people who are in what’s called assisted living today are the people who were in nursing homes ten years ago.” Haffner stated “That is the idea. Provide the residents and their families a setting where the residents have a better quality of life than nursing homes where they were being housed in drugged, restricted states before death.”

The Frontline/ProPublica piece focused on a few events where residents had unfortunate outcomes. One had to do with a resident that had fallen. In Thompson’s column he cited that one Emeritus facility documented 112 falls in 2008. Haffner stated “studies show 50% of people over 85 years old fall. Once they fall, there is a 100% chance they will fall again. The only way to prevent that is to create a nursing-home setting where residents are physically restricted and drugged. That is not what our families and residents want at our communities.”

The main case highlighted by the companion piece was about Joan Boice whose death was related to her stay at an Emeritus facility. Boice’s family won a lawsuit against Emeritus. We asked Mr. Cobb about the case which he stated his company was appealing. He stated, “We care for a high-risk population while balancing their desires for independence. Boice had 31 outside health care professionals visit her during the time she was at the facility and not one reported abuse.”

While all parties regret what happened to Ms. Boice, the appropriate thing would be to attempt to make sure similar incidents do not occur. Emeritus provided us with internal information showing that their incidents of any kind have significantly improved since 2009, from an average of 9.16 per community per year, to 3.62 in 2012. This information was presented to Thompson for his report, but he relied on the information he had collected about activities that are now four years old.

Mr. Cobb stated that “No amount of regulation, no amount of staffing, and no amount of additional staff would avoid human error.” He mentioned his company is transitioning to fully electronic records in the next two years. He left our interview with the statement about “what would be if they looked at nursing homes or hospital care. I am actually certain that assisted living is the safest environment and the most cost-effective alternative.”

Despite his cooperation, Frontline/ProPublica determined to focus on his company and excoriated it over certain incidents that happened in their 480 communities with over 40,000 residents. Academics like Zimmerman called it unfortunate. Regulators like Melusky asked why they were not addressed on the subject and that it misrepresented the industry. Industry people like Haffner and Grimes saw it as deeply misguided.

The question that remains was whether Thompson and his partners were trying to make a good show, or whether they had an agenda to create a federally-regulated environment. Since Thompson and Byker refused to answer anything other than the softball questions put up by friendly interviewers, we can only draw conclusions from the broad outside sources we have interviewed. The Frontline/ProPublica attack on the Assisted Living industry was roundly rejected by those in the know.