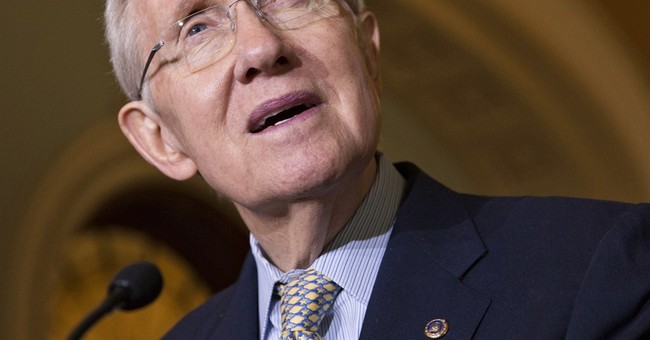 It took a government shutdown, but after four years the Democrats in the U.S. Senate (led by the Undertaker) finally agreed to an established process that has gone on for ages: sitting down with the House of Representatives and hashing out a budget. And in another bit of shocking news, they are demanding new “revenues” (they never say taxes) to come to a compromise.

You may have heard that the feckless Democrats in the Senate have not passed a budget for three years. They standardized a rarely used way of operating a government – continuing resolution or the new in vogue term: a CR. They only did pass a budget this past year because of a House Republican law that was passed that said “No budget, no pay.” The Undertaker and his crew said we can spend recklessly and be irresponsible, but taking away our paychecks is just downright uncivil. But then the Undertaker told his budget chair, Patty Murray (D-WA) that she could not meet with those scoundrels from the House who actually want to operate the government on a budget and maybe trim that nasty overspending.

So while I was working on year-end tax planning for my clients, I came upon the multitude of tax increases that go into effect this year to cover the cost of Obamacare and the expanding federal government.

Here are a few of the more important changes that will occur for this year:

• There is some special depreciation that is scheduled to expire in 2014. It does not look at this time like it will be renewed. There is a 50% bonus depreciation on most new equipment and software. You can write off up to the first $500,000 of acquisitions of fixed assets. Also, there is a special 15-year depreciation for leasehold improvements that usually has to be depreciated over 39 years. Not renewing effectively raises tax rates especially on small businesses.

The stated top tax rate of 39.6% is obviously very misleading. Because of the surtaxes and phase out of exemptions and itemized deductions, taxpayers will be facing federal tax rates of over 50%.

This is not a comprehensive list of all the changes because that would either make your eyes roll to the back of your head or give you severe nausea.

This does not include the hidden taxes that are part of Obamacare that will just be passed through to you by the various industries that were targeted by the health care law. You probably know well about the tax on medical devices, but there are also new taxes on prescription drugs and health insurance policies. You will never see a line item on your bill for these taxes because they will just be hidden in your increased costs.

Probably the most fascinating aspect of the demand for new “revenues” (if there can ever be a fascinating aspect of leftists demanding new taxes) is that they have not even waited to see what the effects are of all these new taxes that are just coming on line. If ever there were a telling moment about what left-wing Democrats are all about, this it is. Don’t wait until you see the actual amount of taxes you collect from all these new rates and don’t wait to see the impact of the new taxes on the economy – just plow ahead asking for new taxes to be piled onto the heap. It might be that they forgot about all these taxes because they voted them in three years ago, but did not want people to see them until after the 2012 election.

Fortunately the House Republicans have their smartest, Paul Ryan (R-WI), going up against the Dems on the conference committee. They also have a bulldog from the Senate – Jeff Sessions (R- AL). And they also have the sequester as a hammer against the Dems. On the other hand because the entire Senate Budget Committee is included bringing the membership to 29, Bernie Sanders (D-VT), who is a Socialist, will be at the table. At least Mr. Sanders is honest about what his political angle.

All in all, the negotiations should be a hoot since they start with budgets that only have a difference of about $1 trillion. But one thing we know for sure: new “revenues” will be off the table for Republicans and should be for the Democrats too. Sorry, we can’t help being wishful thinkers.