The Beginning of the Trump Revolution

Brion McClanahan
|
Posted: Nov 12, 2016 12:01 AM
Share   Tweet
The opinions expressed by columnists are their own and do not necessarily represent the views of Townhall.com. 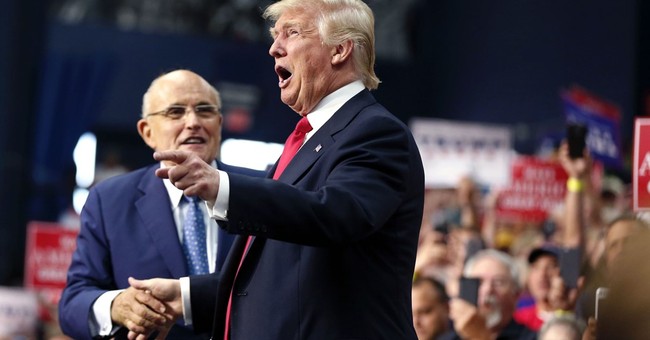 You still need to keep establishment Republicans out of the bed.

Trump made clear in his victory speech that he is going to “work” with those Republicans who did not support him. This is warm and fuzzy and may seem prudent, but we should all remember what happened following the 1980 election.

Ronald Reagan cruised to office in a landslide victory. He rode a wave of anti-establishment sentiment that also helped put Jimmy Carter into the White House in 1976. When Carter failed to produce, blue-collar Americans turned to Reagan and his promises of a robust economy, a smart foreign policy, and limited government. Reagan paid attention to the forgotten man, the same forgotten man that propelled Trump to victory yesterday.

Then he forgot the forgotten man, mostly because he chose to “work” with establishment Republicans.

The Reagan Revolution also gave us Bill Kristol, George Will, the Bush dynasty, Bill Bennett, and a host of other current “never-Trumpers” who should now be ignored, not pandered to.

The first signs of trouble appeared when Reagan withdrew his nomination of M.E. Bradford for the chair of the National Endowment for the Humanities at the behest of Norman Podhoretz and Irving and Bill Kristol.

Most conservatives today have never heard of Bradford. That was the point. Bradford received glowing recommendations from Russell Kirk, Forrest McDonald, and other conservative historians who wanted real change in our understanding of the American founding and United States history. Bradford would have provided that. He had a productive career as a leading conservative scholar and pundit and wrote excellent books on the founding generation. But he—gasp!—wrote critical things about Abraham Lincoln. Podhoretz and the Kristols used the New York Times to smear Bradford. Reagan reversed course and nominated Bill Bennett for the post.

This changed “conservatism” in America. Not only was it underhanded, but it led to the rise of “compassionate conservatism,” the “New World Order” of the Bushes, bad trade deals, “No Child Left Behind,” huge budget deficits, massive immigration, a few bad Supreme Court nominees, and the splintering of what could have been a grand conservative resurgence based on American middle class values.

Instead, middle class Americans were expected to pull the level for people (Republicans and Democrats) who took them for granted while shipping their jobs overseas, destroying their schools and communities, and eroding traditional American life. These establishment “conservatives” have never been “conservative.”

In short, Reagan took the establishment to bed, cuddled with them, and then abruptly divorced the very people who got him there.

Trump has potentially changed that, but he needs to stand firm and stay the course. The wolf will soon be knocking at the door and asking you to let him in. He’ll promise to be good, to support the “America First” agenda, to “make America great again,” but the wolf can never and will never accept that his time has passed.

He won’t eat chicken when he’s been eating pork, and he certainly won’t become a vegetarian.

If this election has shown anything, it is that middle class Americans still have a voice and will vote for a positive message that promises an end to the coddling of the political class and the disastrous establishment policies of the last thirty years.

This is something every working American, particularly those left behind by establishment policies, can and did rally behind.

The Trump revolution has just begun, and we should not let it sputter out of the gate.

Enjoy the victory, but remember who you are and how this middle class resurgence began. It wasn’t led by the establishment.

That ain’t our America.