2010 Race of the Day UPDATE: Perriello Peril in Virginia 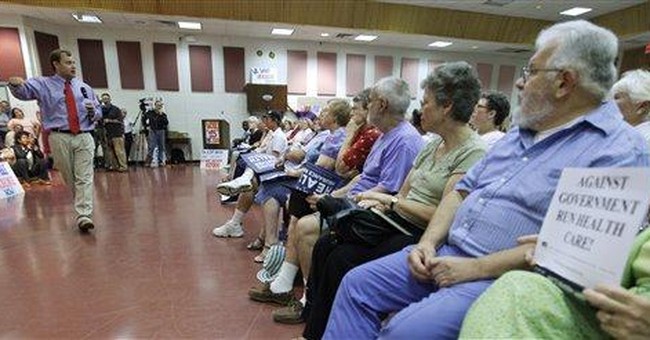 As one of the few Democrats in America who is actively campaign on their voting record, Democrat Tom Perriello has made his votes for the Pelosi/Obama agenda a cornerstone of his campaign in Virginia’s Fifth Congressional District.  Proudly championing his party’s failed trillion dollar stimulus, government takeover of health care, and Cap-and-Trade, one has to wonder what kind of compensation Perriello is receiving in return.

Well, with The Associated Press calling Perriello “a loyal vote for the White House,” and why he’s “the ideal Member in the White House’s worldview,” according to The Washington Post, it’s no shock that the president himself has praised Perriello as “an outstanding freshman” to whom he’s “grateful.”  And there lies the answer as to Perriello’s reward.

Several liberal entities – including Pelosi’s Democratic Congressional Campaign Committee (DCCC), the Service Employees International Union (SEIU), the National Education Association (NEA), the League of Conservation Voters (LCV) & the Sierra Club, VoteVets.org and America’s Families First (AFF) – have and will continue to pour millions into Virginia’s 5th District to try and save their pawn.  Even Chuck Todd, chief White House correspondent NBC News, predicted three months ago, “I think you’re going to see, number one, a lot of money funneled in here because I think the White House is going to almost demand it.”

Perriello’s funding advantage in the homestretch of this election has quickly swelled to nearly 6-1 over Republican Robert Hurt.

Even if Democrats lose the House, they would point to a Perriello win as a silver lining – living proof that you can vote for Obama’s agenda, proudly campaign on that record and win – with well-funded liberal special interests happy to help.  Let’s deny them a moral victory like this and help Robert combat the millions of dollars in attack ads coming his way.

I hope you’ll take a few minutes to visit Robert’s website for ways to help and keep an eye on this race as head approach Election Day.

This year, Republicans are doing what it takes to win back Virginia’s 5th Congressional District. Currently represented by freshman Democrat Tom Perriello, Virginia’s 5th District generally leans to the right according to recent election history.  A reliable vote for his Democratic leadership, Perriello’s voting record demonstrates that his loyalties lie not with his constituents, but rather with Nancy Pelosi. After winning by a 727-vote margin in 2008, Perriello returns this fall to face Republican State Senator Rob Hurt in what is clearly an uphill battle for the incumbent.

The state’s largest district in size, Virginia’s 5th District covers the south central portion of the state. It encompasses eighteen counties and four independent cities, including the historic cities of Danville and Charlottesville – home to the University of Virginia. Despite the present Democratic representation in Congress, non-partisan political handicapper Charlie Cook gives this district a R+5 PVI rating. John McCain and George W. Bush carried the seat in 2004 and 2008, respectively, with Bush earning 56% of the vote in 2004 and McCain winning 51% in 2008. Additionally, in the 2009 governor’s race, Bob McDonnell won the district with 61% of the vote.

Perriello will be hard-pressed to win re-election in 2010. In a district with a strong “Obama surge voter” presence, Perriello’s upset victory in 2008 was also heavily aided by the now-president’s name at the top of the ticket. Not only will he lack that advantage in 2010, he will have to face an outraged electorate. Primarily a rural region scattered with small towns, the devastating loss of manufacturing and farming jobs in Virginia’s 5th has hit the district hard. In fact, Perriello’s district is experiencing some of the highest unemployment rate in the state--yet he has voted for the job-killing trio of the stimulus, cap-and-trade, and government-run healthcare.  In this decidedly Republican-friendly year, Perriello’s liberal voting record puts him at a distinct disadvantage – he sided with Nancy Pelosi’s agenda nearly 90% of the time. This fall, Virginians can put a stop to Perriello’s ineffective big-government and runaway spending agenda.

Republican candidate Rob Hurt stands for fiscal responsibility and strong conservative values. A community leader in Southside Virginia, Senator Hurt is committed to rebuilding the region’s economy. Bringing a strong voice and steady hand to politics, Senator Hurt has voted time and again against increased state spending, bloated budgets, and attempts by Democrats to raise taxes. Furthermore, Robert’s career in public service is unmatched. In addition to the Senate, he has served as the Chief Deputy Commonwealth's Attorney for Pittsylvania County, a member of the Chatham City Council and Virginia’s House of Delegates. Hurt has represented about 30% of the congressional district as a popular state legislator who’s worked hard to create jobs. An advocate for innocent human life and traditional marriage, Hurt and his wife Kathy are proud parents to three young sons.

This fall, Virginia has the chance to take back four seats in Congress, and this one’s at the top of the list. Electing Robert Hurt will put a fiscally-responsible, Virginia values-driven congressman back in the House and deprive Nancy Pelosi from yet another vote. I hope you will visit Rob’s website, Facebook and Twitter pages to stay informed on the latest news and updates from the campaign.