2010 Race of the Day UPDATE: Forcing Pomeroy Into Retirement 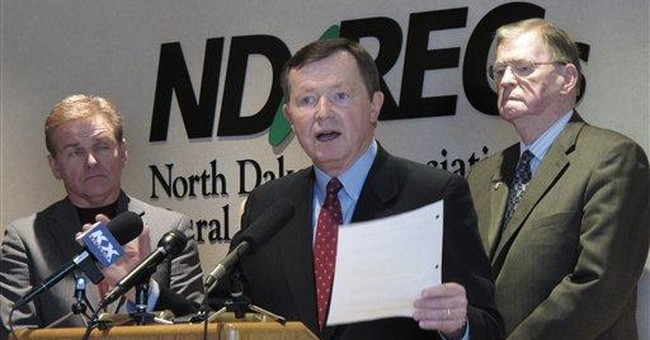 Desperate to defend his out-of-touch Washington to voters in North Dakota, incumbent Democrat Earl Pomeroy has taken up a misinformation campaign in an attempt to salvage his prospects for reelection.

But the people of North Dakota aren’t easy to fool.  While Pomeroy has been spinning his party-line votes for the Obama/Pelosi agenda, which include trillions in new and spending and increasing the debt limit to record and unsustainable highs, his constituents have had to live with the consequences of his actions.  In one example that shows Pomeroy doesn’t represent the values of North Dakota any more, it turns out that he has accepted the most insurance money out of any Congressman in America this election – all the while pushing his party’s government takeover of the industry.

With recent polls giving Republican Rick Berg a slight edge over Pomeroy, voters are clearly seeking a new direction.  They’re tired of the Washington double-speak used so frequently by Pomeroy over the years and are ready to send a message to the Washington liberal establishment on Election Day.

One of the most hotly contested races in the country lies in the northern plains: North Dakota’s At-large Congressional District. Rep. Earl Pomeroy, a vulnerable Democrat who has represented North Dakota since elected in 1992, faces his toughest challenge yet in the form of GOP nominee Rick Berg.

Earl Pomeroy started off the year with retirement rumors surrounding him as it became apparent that the nine-term incumbent has grown to personify “Washington-as-usual”. Pomeroy’s mentor, Byron Dorgan, announced his own retirement from the U.S. Senate in January, an act which would have a  profound impact on North Dakota’s political structure, and could very well lead to Pomeroy’s own forced retirement. Shortly after Dorgan’s retirement, the Democrats scrambled to pass their government takeover of healthcare, in which Pomeroy told his colleagues that he might as well just quit if they don’t hurry up and pass Obamacare.

Pomeroy proved his loyalty lies with his party leadership when he happily cast his vote against a vast majority of constituents and helped pass the Democrats’ Medicare-cutting government takeover of healthcare.  Further cementing his status as a rubber-stamp for the Obama agenda, Pomeroy has demonstrated his unwavering support for the wasteful spending flowing out of Washington, which includes his vote to raise the debt limit.

In the aftermath of Dorgan’s retirement and the day before Pomeroy helped pass Obamacare, Rick Berg won the endorsement of the North Dakota Republican Party at March’s state convention and is also one of our ‘Young Gun’ candidates, a title earned by reaching all the benchmarks as part of our three-level Young Guns program. He currently represents Fargo in the North Dakota House of Representatives, where he previously served as Majority Leader. Berg resides in Fargo with his wife Tracy and son Jack. In addition to being a dedicated public servant, he is also the co-founder of a Fargo-based commercial real estate company.

In 2004, George W. Bush swept North Dakota with 62.9% of the vote, while John McCain won with 53% in 2008. The Cook Partisan Voting Index for the district is R+10 and Rothenberg Political Report rates the general election as “toss-up.” Berg has led in the polls for four straight months as North Dakotans have grown sick and tired of Pomeroy’s support for the Obama-Pelosi big-government agenda. As a result, Republicans have a clear shot to victory in North Dakota’s At-large District on Election Day.  History sometimes repeats itself and, in 1992 when then Congressman Dorgan was elected to the US Senate, Pomeroy was carried to victory that November as well to fill his vacancy.  Now, with Governor Hoeven seeking the US Senate seat, Berg will certainly capitalize on the statewide momentum building around this two top tier races.