2010 Race of the Day: Making Sure There Isn't Moore of the Same 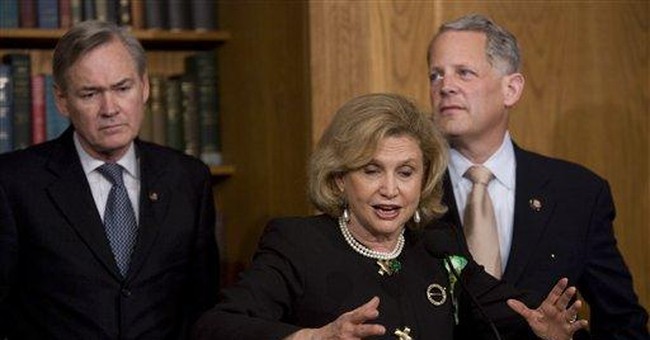 The wave of Democratic retirements began in Kansas’ Third Congressional District, which covers the Kansas City, Kansas metropolitan area and its suburbs, including Wyandotte, Johnson and portions of Douglas County. Incumbent Dennis Moore has represented the district since 1999, but became the first House Democrat to announce his retirement on November 23, 2009. At first, Democrats boasted that they would retain this seat, but changed their tune after several Democrats passed on running. After six months of recruiting failures, they finally coaxed Moore’s wife Stephene into entering the race for her husband’s seat. Stephene is now hoping to continue her husband’s legacy of toeing the party line, killing jobs, and rubber-stamping reckless government spending sprees. She certainly has her work cut out for her as no living Member of Congress has seen their spouse directly elected to succeed them.

On the Republican side, Kevin Yoder has proven to be a formidable candidate, outraising all of his opponents combined in the four months since he entered the race. A fifth generation Kansan who grew up on a grain and livestock farm near the community of Yoder, Kevin has served as a State Rep. for Kansas House District 20 since 2002 and serves as the Chair of the House Appropriations Committee. Yoder, quickly established himself as a leader in fiscal responsibility, cutting more spending than any Chair of the Appropriations Committee in Kansas history. Yoder stood up to Gov. Mark Parkinson and presented a proposal that would’ve balanced the budget without raising taxes. During his time as a State Rep., Yoder was also the lead sponsor of a bill to put a debt ceiling on Kansas borrowing, which passed an overwhelming majority. He has developed a reputation as a champion of small businesses, earning himself a 100 percent score with the Overland Park Chamber of Commerce and a ‘pro-jobs’ rating from the Kansas Chamber of Commerce.

The Third District is Kansas’s smallest and most affluent, and traditionally leans moderately Republican. The Cook Political Voting Index is rated as R+3. Moore defeated Republican incumbent Vince Snowbarger in 1998 and became the first Democrat to represent the district in 37 years. In 2000, Moore barely held on to his seat, taking 50 percent of the vote against Republican Phill Kline. Yoder and his wife Brooke currently live in Johnson County, the crucial “must-win” part of the district.

In 2002, 2004 and 2006, Moore defeated several conservative candidates, and became the policy co-chair for the Blue Dog Democrats in the 110th Congress. He is also a member of the New Democrat Coalition, an organization made up of Democrats that claim they support a “moderate and pro-growth” agenda. Moore may have begun his political career as a moderate Democrat, but he has grown to become nothing more than a loyal Pelosi lapdog, with a record of voting with the Speaker 97.8 percent of the time. Stephene Moore stumbled right out of the gate by endorsing the same failed policies– the so-called “stimulus,” National Energy Tax and government takeover of healthcare – that many believe imperiled her husband’s reelection chances to begin with.

Yoder’s fundraising success has led him to achieve “Contender” status in the NRCC’s Young Guns program. For more on this race, be sure to visit Kevin Yoder’s website, check out his Facebook page and follow him on Twitter.