Regulators Acting As Judge, Jury and Executioner for Railroads

Brian McNicoll
|
Posted: May 17, 2022 12:01 AM
Share   Tweet
The opinions expressed by columnists are their own and do not necessarily represent the views of Townhall.com. 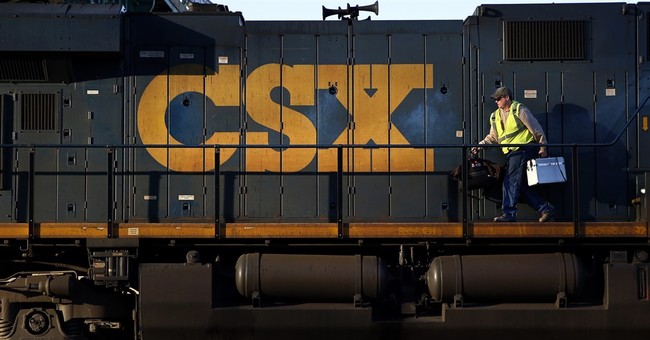 The Surface Transportation Board held two long open sessions in late April – a total of nearly 18 hours of testimony. The invitation it sent out asked for the Class 1 carriers – the biggest railroads in the country – to send “senior executives” to face questions from the board.

The railroads took that to mean executive vice-presidents, corporate attorneys and other key managers. Despite the instructions not calling for CEOs, Robert Primus, a member of the board, lectured each of the representatives who came before him the board that yes, it was good they were there, but their CEOs needed to be there to answer his very serious questions about service levels along the nation’s long-haul rail lines.

But one CEO did come. James Foote, who runs the railroad, CSX, showed up in large part because he wanted to make some points that the various underlings for the other railroads, whose primary mission is to not anger the regulators, seemed reluctant to make.

Foote’s testimony came in the ninth hour of the first day of the two-day hearing. Much of what preceded his testimony was representatives of various shipper groups complaining about rail service, which has not recovered from the pandemic.

Before, trains didn’t move until enough sufficiently complimentary cars could be cobbled together in railroad yards. Cars could sit idle for days waiting for an appropriate train to be assembled to take them on their way. This be-there-when-we-get-there system may have been adequate for decades, but the world and demand for on-time inventory have changed.

Foote’s point is that service did decline during the pandemic and has been slow to return to the record-setting excellence CSX was enjoying before the pandemic in large part because the railroads cannot hire enough conductors to move the trains.

When Primus challenged him that the problem could be pay and working conditions, Foote countered that service could be restored today if the agency would quit acting as an employment office for unions and let the trains run with one conductor rather than two as is now required and obviously favored by the unions regardless that the technology exists to allow them to operate with less.

Railway Age, which covers the industry, took Foote to task for his performance. “Whatever was CSX CEO James M. Foote thinking when he testified before the STB’s ‘Urgent Issues in Freight Rail Service’ hearing April 26?” wrote Frank Wilner, who covers Capitol Hill for the publication.

“His display of disdain for the agency – in particular, White House-nominated and Senate-confirmed STB member Robert A. Primus – was evident in mannerisms and sarcastic responses. For the usually well-respected, third-generation railroader whose track record is one of investor-satisfying performance, Foote’s April 26 appearance is best not bookmarked. Kudos to Primus and STB Chairperson Martin J. Oberman for remaining composed through Foote’s loss of situational awareness.”

Wilner did admit there might be more to the story. On April 5, a hearing on expanding Amtrak service to the Gulf Coast over CSX and Norfolk Southern lines become so heated that, within 24 hours of it ending, legal counsel for both railroads had filed a 10-page objection as to the “tenor and form” of the hearing, specifically with regard to the board’s questioning of railroad witnesses.

The two railroads contended the board’s questions at the Amtrak hearing “crossed the line from clarification into advocacy on a number of occasions” and that board acted more as an “advocate or witness” than a judge, which “compromised” the “fairness of the proceeding.”

It further said such hearings “must be conducted so as to preserve both the reality and appearance of impartiality” and that both “are risked where judges engage in sustained cross-examination, including leading questions calculated to discredit or impeach or that indicate prejudgment of issues.” Wilner must have had some sympathy for these complaints to present them as he did.

So what is happening is the Surface Transportation Board is starting to take on the character of the administration it serves. It hectors private industry for not meeting standards when its own rules stand in the way of meeting those standards. Its cheerleaders in the press demand subservience. Its leaders do seem to have some baked-in conclusions.

The only CEO who shows up to its meetings is attacked and belittled, and reporters take up for the poor beleaguered federal bureaucrat. Even though these same federal agencies and their overly burdensome regulations are all too often part of the problem and not the solution.

Foote is right. If it is to keep up, the railroad industry must be run a lot more like other industries – with emphasis on efficiency and on-time delivery rather than union contracts and kissing up to regulators. Berating the one CEO who shows up to speak truth is not the path forward.