Brian McNicoll
|
Posted: Feb 16, 2018 12:01 AM
Share   Tweet
The opinions expressed by columnists are their own and do not necessarily represent the views of Townhall.com. 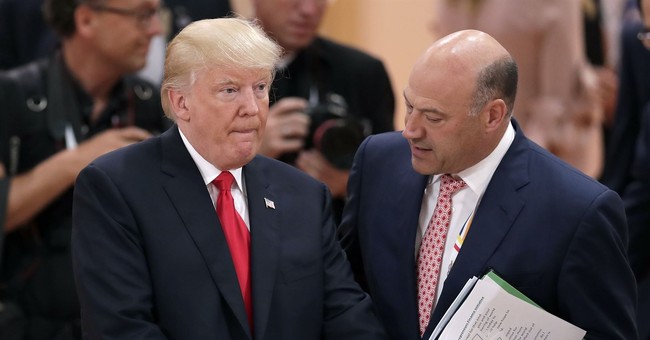 President Trump has made enormous progress on a wide variety of issues in his first 13 months in office.

One can’t help wondering how much more he could have accomplished if he didn’t have so many people on is own side working against him. It’s not just Jim Comey or Sally Yates or Rod Rosenstein. It’s also the Federal Energy Regulatory Commission, controlled by Trump appointees, voting down an administration-backed move to improve grid flexibility. It’s Rex Tillerson being accused of calling Trump a moron.

When it comes to the economy – the area where more Americans think President Trump is on track than any other – his chief economic advisor doesn’t seem to want to go along.

Cohn does not support Trump’s America First trade policy.  His mission, according to the New York Times, has been “nudging Mr. Trump toward a more free-trade stance that avoids harsh steps toward China and other economic partners.”

A free trader in the traditional Republican sense – despite being a lifelong Democrat – Cohn has steered the president away from “tariffs on steel, aluminum and other goods that might damage relationships with American allies,” the Times reported.

He publicly clashed with the president last summer after the Charlottesville riot and even threatened to resign over Trump’s statement that there were “good people on both sides” of the dispute there. He is reported by Sen. Tom Carper, D-Del., of having pretended he was losing his connection to discontinue a phone call with the president.

Cohn doesn’t seem to like the president or his policies much at all but stays out of what appears to be a sense that he alone can save America from this administration. “Fire and Fury,” the much-criticized and disputed insider White House book by Michael Wolff, described an email which Wolff claimed “represented the thinking” of Cohn.

“It’s worse than you can imagine,” reads the email, which purportedly was sent to Goldman Sachs Chairman and CEO Lloyd Blankfein. “An idiot surrounded by clowns. Trump won’t read anything – not one-page memos, not the brief policy papers; nothing. He gets up halfway through meetings with world leaders because he is bored. And his staff is no better. Kushner is an entitled baby who knows nothing. Bannon is an arrogant prick who thinks he’s smarter than he is.

“Trump is less a person than a collection of terrible traits. No one will survive the first year but his family. I hate the work, but feel I need to stay because I’m the only person there with a clue what he’s doing. The reason so few jobs have been filled is that they only accept people who pass ridiculous purity tests, even for mid level policy-making jobs where the people will never see the light of day. I am in a constant state of shock and horror.”

Never mind that Cohn, who decidedly is not in a mid level job, somehow survived this ridiculous purity test to get and keep his job. Never mind that with a $285 million severance package when he left Goldman and a salary in excess of $20 million per year while there, he can hardly claim to understand the economic situation of the common man as Trump, who spent decades in the construction business, has.

This is not to say Cohn is always wrong. He helped write the president’s tax reform package and get it through Congress. He has advised the president on how to increase jobs and salaries, and he does get credit for curbing some of the president’s worst instincts on trade.

Your job as a presidential advisor is to make the president’s policies work. No one voted for you. No one wants you to prevent what they did vote for. This president prefers an America First approach to foreign policy. It’s time his economic team helps him achieve it.