Then They Came For Ben & Jerry’s

Brian McNicoll
|
Posted: Aug 12, 2017 12:01 AM
Share   Tweet
The opinions expressed by columnists are their own and do not necessarily represent the views of Townhall.com. 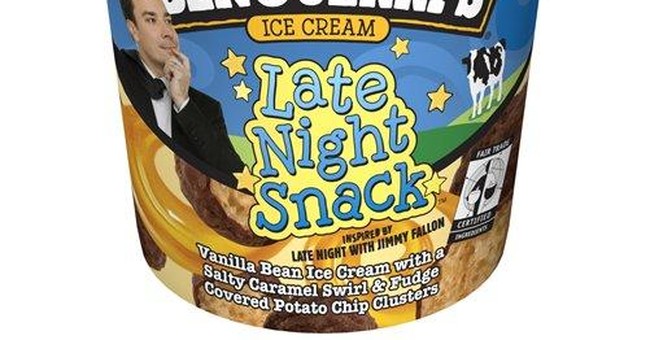 Ben & Jerry’s ice cream had to figure it would be one of the last firms in America to come under attack from the liberal misinformation complex.

It has created flavors to honor Democrat politicians, contributed to Democrat campaigns and positioned itself well to the left on social and employment issues. It has cultivated an image of the “good capitalist,” which can create jobs, lead in its field and do it all in a sustainable and environmentally friendly way.

But when there became a bigger fish to fry, all the loyalty the company thought it had earned suddenly dried up. And now the knives – or at least the ice cream spoons – are out for it.

Last month, the New York Times fired an opening salvo in this new battle with an article that said several of Ben & Jerry’s more popular flavors – Half Baked, Phish Food Peanut Butter Cookie and Chocolate Fudge Brownie were found to contain a “controversial herbicide” – glyphosate, the main ingredient in the RoundUp brand of weed killers.

Why would the left turn on Ben & Jerry’s in this way? Because a bigger lobby – in this case the Organic Consumers Association – wants it this way. For years, the organization has tried to pressure Ben & Jerry’s to “stop greenwashing” itself and “go organic.” Ben & Jerry’s already doesn’t use genetically modified plant ingredients in its products, but that is not enough.

It also is not enough that the amounts of glyphosate found in those ice cream pints fell far below the safe legal limits set by the EPA. To reach what the EPA considers the danger zone, a 75-pound child would have to eat 145,000 servings of Chocolate Fudge Brownie, which contained the most glyphosate of any of the brands tested. An adult would have to at 290,000. Even the binge-iest of ice cream eaters could not come close.

The Organic Consumers Association’s Ronnie Cummins summed up his group’s response: “Not everyone agrees with the acceptable levels governments have set. And, anyway, would you want to be eating this stuff at all?”

So, perhaps it’s twice as bad as government describes, and kids would need to eat only 72,000 pints and adults 145,000. No one has proposed eating glyphosate itself, and everyone has safely eaten food grown with the help of glyphosate.

Few things bring out the regulatory crazy like anti-glyphosate campaigns. The organics people point out the International Agency for Research on Cancer classified it as “probably carcinogenic” in a 2015 report. But they do not point out that just last month, the European Chemicals Agency refuted the link with cancer or that nearly every regulatory agency, food safety outfit and chemicals evaluator in the world has tested glyphosate repeatedly for decades now and found no link with cancer.

They also fail to point out that, according to a Reuters story in June, the working group that developed the IARCs’ findings that glyphosate is probably carcinogenic refused to consider an important study that contradicted its thesis. The Agricultural Health Study followed 89,000 farm workers and their families for two decades and found no discernible link to cancer.

Findings from this study were first published in 2005. But because the group is still processing some data for its updated study, the IARC working group refused to consider its findings, even though one of the scientists is involved with both projects and knows full-well what the updated findings are expected to reveal.

The foot-dragging on releasing the new data, which appears to be designed to keep information unfavorable to the IARC’s findings from seeing the light of day, has caught the eye of Congress. Sen. James Inhofe, R-Okla., chairman of the Senate’s Environment and Public Works Committee, who wrote to the heads of the Department of Health and Human Services and the National Institutes of Health last week, pushing them to review the data and publish those parts having to do with glyphosate. Rep. Trey Gowdy, R-S.C., the new chairman of the House Committee on Oversight and Government Reform, has asked the same of the National Cancer Institute.

So we have advocates lobbying for organic food claiming on one side that any exposure to glyphosate is too much, regardless of the fact we’re nearly all consumers of it and seem to be surviving. On the other side are the public health, food safety and chemical analysts of the United States and most of the countries of Europe saying the amounts we may inquire in normal food intake pose no threat.

So let’s get those results out and see what they say and where we stand. And if it turns out yet again that the dangers have been oversold and the benefits undersold, then let’s, for once, let science dictate over lobbying interests and let farmers use the products they find most effective.