Brian McNicoll
|
Posted: Jan 30, 2016 12:01 AM
Share   Tweet
The opinions expressed by columnists are their own and do not necessarily represent the views of Townhall.com. 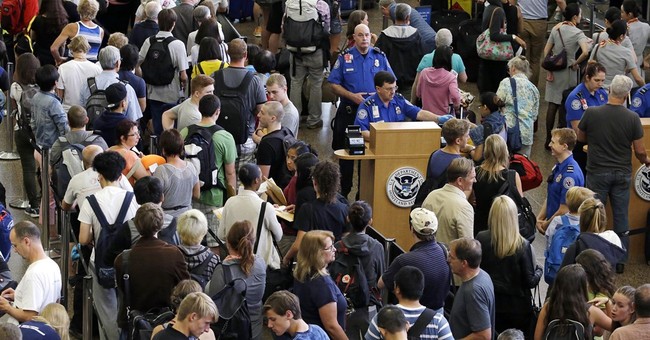 There’s nothing like a terrorist attack on home soil to get the overreaction machine churning in Washington.

We have a presidential candidate promising to ban all Muslims from entering the United States – at first, even those who live here and were away on vacation. We have calls for roundups and increasing scrutiny at the borders.

And, in recent days, we’ve begun to hear calls to “reform” the Visa Waiver Program.

The visa waiver program is there so people we all agree we want to be able to enter the country can do so with minimal hassle. They are people from our 38 closest allies in the world who are allowed to enter for up to 90 days for tourism, business or to travel through the U.S. to other locales.

This does not allow anyone in unchecked. Even those who receive visa waivers must go through the Electronic System for Travel Authorization, or ESTA, which screens identities against multiple law enforcement and terrorism data bases that include information not only from us but from foreign governments as well.

The program was improved just last August to further tighten passport requirements, codify air regulations and sketch out the role of air marshals.

And in December, Congress passed – as part of the Omnibus spending measure – yet another round of reforms to strengthen provisions that allow the Department of Homeland Security and the State Department to kick out any countries they determine don’t share enough information on terrorist threats and those that present a “high risk” to U.S. security.

Another provision declared ineligible anyone who has traveled to Iran, Iraq, Sudan or Syria since March 2011 and people who are dual citizens of those countries. Still another would force visa waiver partner countries to certify they’re both issuing passports with all the most modern biographic, biometric and fraud-resistant technologies, that they have a system to quickly recover and report lost or stolen passports, and to move toward screening travelers through Interpol within nine months.

In other words, they’re already being pretty careful with this … much more careful than at the southern border. The 20 million people who use it every year have posed no threat to Americans, and the program has enabled the United States to do a lot of good in other areas of international security.

Not only that, they are rethinking the process in real time and adjusting accordingly. Even the online application process has been reformed and strengthened during the last year, according to The Washington Post.

The new provisions have not been in effect long – some less than three months. They deserve a chance to work.

The facts are a lot of people want to travel to the United States for perfectly honorable purposes, and countries want to be part of the visa waiver program.

In 2005, the State Department began working with 19 other countries that wanted to be designated as “program countries” with full rights under the program. Today, 10 of those 19 have been admitted. Moreover, the European Union is pressuring the United States to approve its five remaining members who are not already in the program and Bulgaria is holding up a minor trade deal to get in.

The mission of immigration security always is to sort out the well-meaning from the bad apples. The visa waiver program actually helps us do that. It not only sets up a process to ease travel to the United States from citizens of our closest allies, it allows us to inspect and bring about upgrades to the security procedures in use in those countries.

The program gives us leverage to insist on stringent security requirements from our allies, including counterterrorism, law enforcement, border control, aviation and document security standards. Countries must ensure their passports and travel documents meet our technical anti-forgery standards, and these other countries’ operations are inspected regularly by American officials to ensure ongoing compliance.

Moreover, the program has teeth. Countries, such as Argentina in 2002 and Uruguay in 2003, have been kicked out because their security procedures did not measure up or they had become too dangerous for other political reasons.

According to Mark Frey, a security expert writing in The Hill, “No other program provides the U.S. government with the opportunity to conduct far-reaching and consequential audits of foreign security standards, ensuring alignment with our high standards for measuring risks.”

In other words, it’s better than the face-to-face interviews conducted in embassies around the world and does not need biometric or other measures to slow the process that some have advocated on Capitol Hill.

It’s understandable for Congress to want to do everything it can to keep Americans safe in this particularly dangerous time. But just as these processes seek to sift the good from the bad, so must Washington. The visa waiver program works, and it’s getting better. And we need to back off and let that continue.