Brian Garst
|
Posted: Nov 02, 2017 11:22 AM
Share   Tweet
The opinions expressed by columnists are their own and do not necessarily represent the views of Townhall.com. 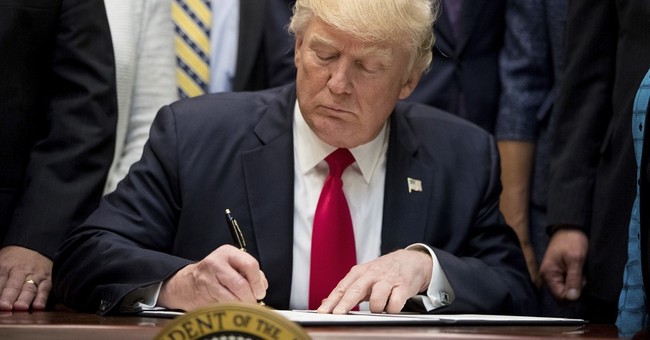 On Wednesday, President Donald Trump signed Congress’s resolution to repeal a Consumer Financial Protection rule, that, by the force of government, put the interests of trial lawyers ahead of American consumers.

The July rule, which the Senate voted to repeal last week, overrode arbitration clauses present in some financial contracts in favor of more lawyer-friendly class-action lawsuits.

In 2011, the Washington Examiner reported that when Cordray was named Attorney General for the State of Ohio, he quickly put his campaign contributors in charge of the state’s lawsuits. In just two years, he disbursed over $800,000 to out-of-state plaintiffs’ firms – a clear violation of then-existing Ohio law, which prohibited the state from contracting with firms that gave above $2,000 to oversight officials’ state political party.

The CFPB rule Cordray’s agency crafted, wrote, and implemented – and Congressional Republicans revoked – could be viewed as merely the federal extension of Cordray’s crusade to enrich the trial lawyers that have supported his political endeavors.

Publicly, Cordray would disagree with this characterization, alleging that “Wall Street won and ordinary people lost” due to Republicans’ decision. Privately, however, the CFPB head seems to take a softer tone.

In a letter to Sen. Sherrod Brown (D-Ohio), the leading Senate Banking Committee Democrat, Cordray admitted that “roughly half” of the credit card industry does not utilize arbitration clauses, and that one study found only 7 percent of community banks use arbitration agreements. This admission is perplexing given how the CFPB’s supporters paint a dramatic picture of consumers forced into exploitation.

In a previous response to a critic, Cordray wrote the detractor’s arguments relied on “so-called analysis that is simply embarrassing.” Perhaps Cordray should instead examine his own claims, which seem riddled with half-truths.

The average $5,389 payoff that Americans receive from arbitration – a process that costs little to nothing to the consumer – is significantly more than the $0 figure that the CFPB’s analysis found 87 percent receive from class action suits. The pay-offs from “successful” cases are typically not much higher. A study of class action lawsuits from 2010 to 2013 found the average consumer walked away with $32, while trial lawyers reaped $425 million in fees. The system is designed to enrich lawyers, not plaintiffs.

Often, Cordray is the man yelling “fire!” in a crowded movie theater. However, the melodramatic director may be right on one front. The financial institutions that do include arbitration clauses in contracts likely do it with the intent of keeping more money in their vaults. By no means does this mean that arbitration clauses are bad or that the federal government should outlaw them.

In many instances, the decision to utilize arbitration clauses is an understandable business decision, free of malevolent intent. Sometimes, class action lawsuits dole out funds to undeserving parties, leaving those legitimately harmed with just dollars or pennies. It seems that settling through arbitration would not only shrink the net monetary liabilities of the company in question, but it will also put more reimbursement cash in the hands of the people who deserve it – those with legitimate, proven damage.

The power of consumer choice, not the force of government, should set the market standards for arbitration. If Americans do not want to sign a contract that includes an arbitration clause, they do not have to. As previously mentioned, even Cordray admitted half the credit card industry does not use them and that perhaps 93-percent of community banks do not either.

If arbitration clauses are indeed so predatory, Americans can easily take their business elsewhere, forcing the clause’s proponents to either comply with customers’ wishes or lose out to the competition.

Thankfully, the White House signing ceremony put the last nail in the coffin for this latest CFPB overreach. It signified the Trump administration agrees with congressional Republicans: the CFPB should not be interfering in market decisions just to override consumer choices they dislike and prevent consenting agreements. The American people are now free to create the market landscape that suits their best interests, rather than those of politically connected trial lawyers.

Brian Garst is Vice President of the Center for Freedom & Prosperity