Brian Darling
|
Posted: Feb 23, 2020 12:01 AM
Share   Tweet
The opinions expressed by columnists are their own and do not necessarily represent the views of Townhall.com. 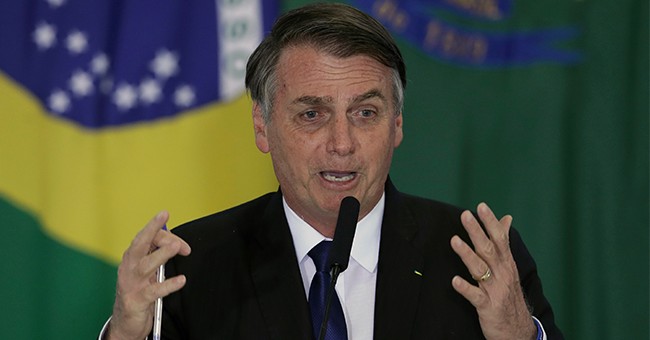 The election in 2018 of Brazil’s President Jair Bolsonaro has shown that South Americans are pivoting away from socialism and towards free market economics. This is a unique time in Central and South American politics with many nations rotating away from China and Russia towards the United States and other free market nations. Nations that show a healthy respect for property rights, low taxes, low regulatory policies and respect for intellectual property rights should be rewarded with free trade agreements that benefit both economies.

Right now, the United States is in a trade war with China with ongoing negotiations to resolve disputes over tariffs, intellectual property theft and corporate subsidies. There are large gulfs between the way the United States governs with a light touch regulatory scheme and the heavy-handed Chinese involvement in the economy. It makes geopolitical and economic sense for the two biggest economic superpowers to engage in commerce, yet these are nations trying to peacefully co-exist with vastly differing economic models.

According to the Office of U.S. Trade Representative, the U.S. has free trade agreements with the South American nations of Chile, Columbia and Peru, yet none with Brazil.  According to the International Monetary Fund’s World Economic Outlook Database, the United States has the largest Gross Domestic Product (GDP) in the world. The next highest in North, Central or South America is not Canada (#10), nor Mexico (#15); the next highest nation ranked in GDP in that region of the world is Brazil (#9).  It is ironic that the two biggest economies in the Americas are currently on the same page with economic policies, yet with no free trade agreement.

With the recent shift under President Bolsonaro towards free market capitalism, and away from socialism, it is time for President Donald J. Trump to reward Brazil’s turn toward freedom with a free trade agreement.

The election in Brazil shifted influence away from China and Russia and toward the West. I wrote in Townhall on October 9, 2018, just before the Workers’ Party was tossed out of office, the election in Brazil “may help determine if Central and South America will move away from the corrupt socialist policies we see being promoted in Venezuela and Cuba toward free market-oriented policies promoted by the likes of a candidate who is likely to be the next President of Brazil.” With “The Trump of the Tropics” Bolsonaro winning that election in Brazil, it is time for Brazil and the United States to work closer together on military readiness and economic trade issues.

Years of rule by the corrupt Workers’ Party put Brazil in with a very low ranking in economic freedom in The Heritage Foundation’s Index of Economic Freedom. Brazil has a low growth rate and high unemployment thanks to 13 years of rule by the corrupt Marxist Workers' Party. Policies being implemented by the new government are showing progress towards more economic freedom.

Brazilian leaders are saying all the right things. On September 11, 2019, Brazil’s Minister of Foreign Affairs Ernesto Araujo identified the big challenge for civilization as "not climate change,” but “ideology.  Araujo said that the new challenge is “globalism” with “cultural Marxism infiltrated in the institutions.” Coming from a nation with an economy poisoned by years of Marxist ideology stagnating the economy and allying with communist nations, Aruajo understands more clearly than most Americans the need for freedom, free markets and moral leadership. In November of 2019, Brazil’s Minister of Economy Paulo Guedes came to the United States to make the case that Brazil’s dismantling of the socialist state constructed by the Workers' Party is well under way. Guedes holds a PhD in economics from the University of Chicago.

There is one big obstruction to a free trade agreement with Brazil – protectionism by some in the Trump administration.  Oliver Stuenkel wrote in Foreign Policy on December 6, 2019 that recently imposed steel and aluminum tariffs have moved the relationship in the wrong direction. Stuenkel argued “as the most pro-American president in modern Brazilian history, Bolsonaro has put establishing a strong alliance with the United States at the center of his foreign policy from the start.” Early in the administration, Bolsonaro took a hard line against China and Araujo lamented the influence of “Maoist China” in South America. Guedes met with Commerce Secretary Wilbur Ross a few months ago in the hopes of better relations.  Unfortunately, the Trump faction supporting hard line trade policies and protectionism beat out the pro-freedom factions in the government who would support free trade agreements with strong U.S. allies like Brazil.

It is time to abandon protectionist tariffs and reward President Bolsonaro with a free trade agreement. That will help Bolsonaro secure his position as a pro-American president in the largest nation in South America while benefitting the United States by having a large, strong military and economic ally in South America.