Brian Darling
|
Posted: Apr 10, 2018 1:30 PM
Share   Tweet
The opinions expressed by columnists are their own and do not necessarily represent the views of Townhall.com. 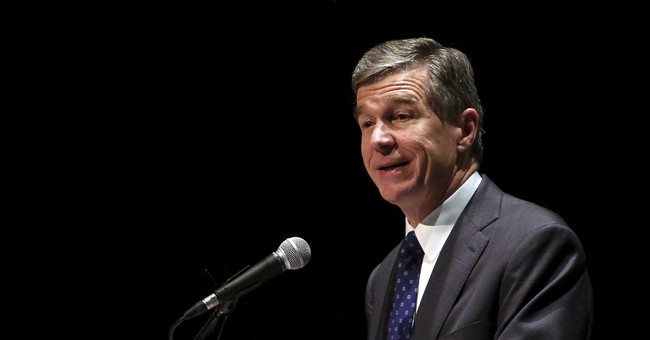 North Carolina is becoming an example of the new two Americas – government political employees versus the people.

The definition of hypocrisy is the audacity to preach integrity while acting like a self-dealer. The administration of Roy Cooper, the Governor of North Carolina is a great example of a government official using the power of government to create a new class of citizens in the state.

Ironically, it was North Carolina Democratic Senator John Edwards who made the phrase “Two America’s” part of the American lexicon when Edwards ran for president in 2004. During the 2004 Democratic National Convention Edwards argued “we live in a country with two different Americas -- one, for all of those people who have lived the American dream and don't have to worry, and another for most Americans, everybody else who struggle to make ends meet every single day.”  We are now seeing this play out in North Carolina.

Governor Roy Cooper, also a Democrat, recently made headlines for giving his cabinet members raises up to 50 times more than what the state legislature approved.  While state workers each received $1,000, their politically-connected bosses – who are also state workers - got up to $50,000.  That’s because Cooper’s administration rewards patronage but ignores the everyday hard work of non-political employees.  The everyday hard working people of North Carolina only make a median salary of $50,584 according to Department of Numbers website – a number below the national average of 57,617.

North Carolina government employees are doing great. For example, Dr. Mandy Cohen, secretary of the Department of Health and Human Service, saw her salary rise by more than $50,000 in her first year on the job, including a $17,500 raise in January 2018 and she now makes $192,500 a year. As justification, the Cooper administration stated that the pay raises were justified in order to “minimize turnover and encourage continued leadership in our state agencies.” The problem is that you don’t want to encourage individuals to make government employment a way to get rich.

At first glance, this is a far cry from the Edwards plea to make the gap between average Americans and the elite smaller. Indeed, despite having a fully staffed Attorney General’s Office controlled by Democrats, Cooper has also spent more than $1.5 million in taxpayer cash on private law firms to fight the Republican controlled legislature’s efforts to slow government spending.

But, the actions of Cooper, and his well-paid health secretary Mandy Cohen, are particularly egregious because they have excoriated others outside the government who have rightfully argued that stability of leadership is a sufficient rationale to justify salary increases.

Cohen has fought with the Charlotte-based managed care organization, Cardinal Innovations and its former CEO, Richard Topping, over executive compensation.  When Cardinal’s Board of Director’s argued that Topping’s salary was justified by the organization’s need for stability, his performance, and most notably, his experience in the industry, Cohen concluded that this constituted “serious financial mismanagement and regulatory noncompliance.” Topping’s real offense was that he was leading a reform effort championed by Republicans. In response, Cohen disbanded the board and loaded it up with people loyal to her.

When one looks to the motivation of Cohen, one can see that the motivations might have been nefarious and partisan. Cohen was a former Chief Operating Officer and Chief of Staff at the Obama Centers for Medicare & Medicaid Services (CMS) and tried to rush through a massive last minute expansion of North Carolina Medicaid. She initiatied a legal fight with the state legislature after they blocked her illegal plan for an expansion. The Trump administration then took over in Washington.

It appears that Cohen took over Cardinal Innovations because it was a Republican creation intended to prevent Democrats like Cohen from endlessly growing Medicaid.  Cohen took it upon herself to unlawfully seize control of the only entity in the state that challenged her management of Medicaid. It is ironic that Cohen was complaining about executive compensation when she had just accepted a massive pay hike of her own.

To add to the hypocrisy, Dr. Cohen’s family has made a living off of Medicaid. Her husband, a top healthcare fraud attorney, and his law firm got $10 million in fees and expenses to defend an entity that was accused of Medicaid fraud.  While Dr. Mandy Cohen was controlling Obamacare Medicaid in Washington, her husband was collecting millions in legal fees from Medicaid in Florida.

There are two Americas. The North Carolina example is merely one of many, but an excellent case study in self-dealing and using the power of government to get rich.