Brian Darling
|
Posted: Jan 26, 2016 9:50 AM
Share   Tweet
The opinions expressed by columnists are their own and do not necessarily represent the views of Townhall.com. 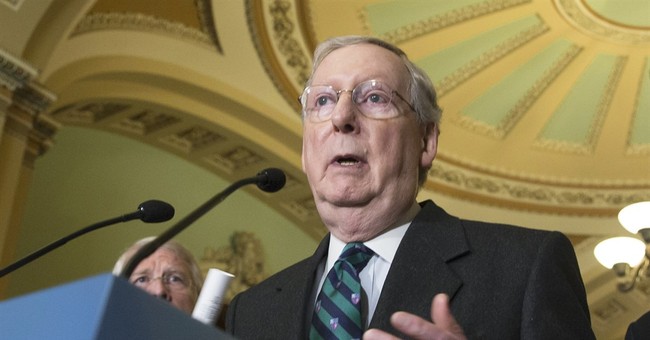 The National Journal is reporting that Senate Majority Leader Mitch McConnell (R-KY) has introduced a blank check Authorization for the Use of Force (AUMF) bill for President Barack Obama in the war against ISIS. McConnell has commenced a fast track procedure so that he can move to commence a debate on this issue at his discretion.

McConnell is pushing an AUMF in a way that promotes bad politics and policy.

The politics are complicated. It is possible that McConnell on reason why McConnell sprung this AUMF on the Senate was because he wants to seize control of the debate on an AUMF from Speaker of the House Paul Ryan. The Huffington Post reported last month that one of Ryan’s goals was to push “congressional approval of a new Authorization for the Use of Military Force to allow the president to go after the Islamic State, also known as ISIS.” McConnell might be worried that the House will produce an AUMF that limits ground troops or the geographical scope of the war.

There is a second possible political reason why McConnell is pushing for this debate now. My theory is that he wants to help out his buddy Sen. Marco Rubio (R-Florida) and to hurt his nemesis Sen. Ted Cruz (R-TX). Throwing a new debate over an AUMF into the public domain will give Sen. Rubio an opportunity to burnish his national security credentials just before Republicans primary and caucus goers start voting.

As a policy matter, a blank check AUMF is a terrible transfer of constitutional power from the legislative branch to the executive. The debate is nothing less than the Republican Leader of the Senate granting President Obama free reign with no restrictions for the remainder of his term and, if Hillary Clinton wins the presidency, no restrictions on where she commits troops and uses force in the name of defeating ISIS. Clearly this is not the smartest policy move by Sen. McConnell.

“(This authorization) will allow this president and future presidents to wage war against ISIS without restrictions on time, geographic scope, or the use of ground troops,” Ron Paul wrote at his website, the Ron Paul Institute. “It is a completely open-ended authorization for the president to use the military as he wishes for as long as he (or she) wishes. Even President Obama has expressed concern over how willing Congress is to hand him unlimited power to wage war.”

He continued: “President Obama has already far surpassed even his predecessor, George W. Bush, in taking the country to war without even the fig leaf of an authorization. In 2011 the president invaded Libya, overthrew its government, and oversaw the assassination of its leader, without even bothering to ask for Congressional approval.”

Considering the Republican drumbeat that President Obama is “leading from behind,” it makes zero sense for Republicans want to cede even more power over foreign policy to an executive branch when they argue that the Obama Administration is bungling the War on Terror.

“The AUMF put forward by McConnell would not restrict the president’s use of ground troops, nor have any limits related to time or geography,” the National Journal writes. “Nor would it touch on the issue of what to do with the 2001 AUMF, which the Obama administration has used to attack ISIS despite that authorization’s instructions to use force against those who planned the 9/11 terrorist attacks. By contrast, the legal authority put forward by the administration last February wouldn’t authorize “enduring offensive ground combat operations” and would have ended three years after enactment, unless reauthorized.”

Senator Rand Paul (R-KY) has a Declaration of War against ISIS that forbids ground troops, repeals the Iraq AUMF, expires the Afghanistan AUMF and expires so that Congress can revisit the issue in a year. Senators Tim Kaine (D-VA) and Jeff Flake (R-Arizona) have an AUMF that, according to The Hill, “would expire after three years unless reauthorized, repeal the Iraq War authorization for the use of military force (AUMF) and be the sole authorization for the war against ISIS.” Both will not even be allowed debate by the Senate Majority Leader, because he will not want any distractions from his AUMF.

From a political perspective, it is clear that he establishment on foreign policy wants to use this issue to push another ground war. Sen. Cruz seems more reasonable and closer to a restrained foreign policy than Rubio when it comes to committing American lives to nation build in Syria and Iraq. Sen. Rubio has already showed his hand that he is willing to throw in with advocates for using the military as the world’s police like Sens. John McCain and Lindsey Graham.

Even some establishment Senate Democrats may be attracted to the idea that they can use this AUMF debate to embarrass Senator Bernie Sanders (I-VT) and further paint him to the left of President Barack Obama on foreign policy.

Sadly, there are some political fossils in Washington, D.C. who want to use an AUMF to help the candidates who whole-heartedly support nation building and an foreign policy that makes us less safe. There are Republicans who don’t care that they are giving away the war declaring power to President Obama with a blank check authorization that will have no end nor geographical restrictions. And there seem to be members who are politicizing the most important decision a Member of Congress will ever make – whether to go to war.