Peace Through Strength: Another Trump Radicalism?

Brian Birdnow
|
Posted: Jan 01, 2018 12:01 AM
Share   Tweet
The opinions expressed by columnists are their own and do not necessarily represent the views of Townhall.com. 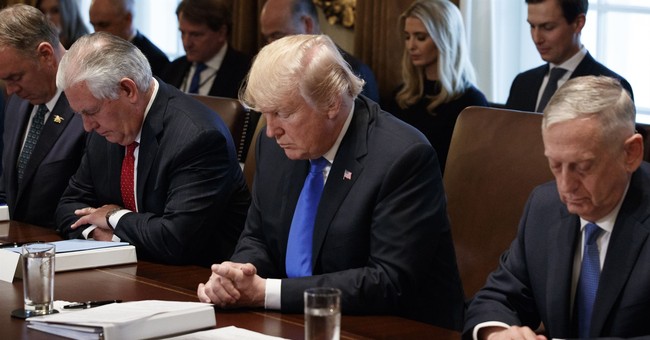 In the last couple of weeks, the Western world has celebrated another Christmas, notwithstanding the killjoys who insist on arguing about how to extend the greetings of the season.  In addition, we have had a brief, but welcome, respite in the sexual harassment casualty count, as 2017 passes into the record books.  What has gone mostly unremarked in the rush and bustle of the Christmas season is the emergence of a stated foreign policy platform for the Trump Administration, and the predictable outrage from the organs of respectable opinion in the media.  The charge that the Trumpian “America First” vision is outrageous, xenophobic, and a great break with American tradition is predictable enough, but, of course, underneath the hype there is nothing controversial here, and the general ideas are well grounded in geopolitical realities, and the American tradition.

An Associated Press article by Matthew Lee, which appeared in the major metropolitan dailies on December 15th set the tone for major media coverage.  As the piece informed the readers, “America First” is a “stark worldview that sees rivals battling each other for supremacy…has little use for alliances, treaties, and other international agreements unless they distinctly benefit the United States, its industry, and workers.”  If a reader pores through this statement, disregarding the breathless prose, you find nothing radical or out of line. Donald Trump was elected the President of the United States, not the mythical king of the world, and, as such, he should work for the benefit of his country.  Only a fool, or an AP reporter would suggest otherwise.

In terms of national power and influence, nations have always sought these intangibles, and it is usually a zero-sum game, with one nation’s gain resulting in another nation’s loss.  When the President and his agents talk of making America great again, they mean reasserting American power, and using it as a force for general good in the world.While the remnants of the New Left might find this shocking most normal Americans would agree.  They would also agree that American power has traditionally rejected the notion of brute force, but has, preferred “soft power”, including money, and cultural standards to the mailed fist.  This is the American way of world leadership and Trump wants to recapture the standard.

The AP article also claimed that Trump is falling back on the old policy of “peace through strength”, i.e. the ancient idea coined by Augustus Caesar, which worked pretty well for about four hundred years, back in the day.  The article posits four pillars of the new Trump doctrine:

Putting these ideas into action will require time and patience and, as H.R. McMaster, the National Security Adviser phrased it, “…Geopolitics are back and they are back with a vengeance.”

In the full application of the new Trump doctrine, Russian and China will be seen as “revisionist” powers who seek to upset the status quo to their advantage.The Russians seek to re-establish the Soviet Empire, and the Chinese see a golden opportunity to bid for world hegemony.The Trump idea is to treat these nations as the threats they are, not to “hit the reset button” with Russia, nor yammer on about a mythical strategic partnership with China.  Iran and North Korea will be treated as rogue states, who might be welcomed back into the international community, but must show their sincerity by behaving as civil nations.  Finally, the doctrine will recognize the threats posed by non-state actors such as terror networks and global organized crime.  This doctrine is underpinned by the idea that economic security is true national security, and must be backed by military might.

Now, the major question must be posed: What is radical or revolutionary here?Trump has said many times that America must, first of all, retake control of her own borders, and then flesh out a strategy for defeating terrorists, drug traffickers, international prostitution rings, and cyber security threats.  Meanwhile we will keep or military strong and our alliances firm in an unpredictable world.  Future trade deals will be made only when they are truly reciprocal and advantageous to all signatories.  The Trump policy will be sterner and stronger than the wet-noodle pose of his predecessor, Barack Obama and his henchwoman, Hillary Clinton.  Trump is not projecting himself back to Roosevelt and the Big Stick, to Taft and Dollar Diplomacy, or to any of the Containment Policy chiefs who won the Cold War, but he is insisting on a more assertive foreign policy, befitting the strongest nation on earth.

Critics can see reasons for concern here.  Some of those who have addressed Trump killing the Trans Pacific Partnership have pointed out, rightly, that the Chinese are benefitting from America walking away on deals, years in the making, that were then judged as not in the national interest.  Others have pointed out that we should involve ourselves more deeply in the international community, as they are moving away from us.  A nation might catch more flies with honey than we will with vinegar, and such an approach should be held in reserve, if necessary.

Still, Donald Trump has confounded his critics by putting out a foreign policy brief that is reasonable, strong, and in line with the national interest.  It is old-fashioned statecraft of the practical style, and conforms nicely to the realist school of foreign policy begun in this country by John Quincy Adams in 1823.  That is a pretty good start, and it is why the mainstream media is flipping out, again!