'Twas the Week Before Christmas? Hillary at It Again! 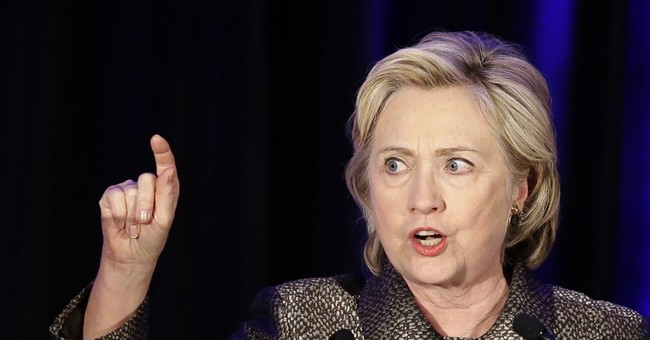 In an item tucked in the back pages of most of the nation’s major metropolitan daily newspapers this week the media noted that the presidential candidates are making the rounds trying to cash in on the charitable nature of the Christmas season by filling their campaign coffers to overflowing, and not with eggnog, either. Actually, the story was titled to fit all of the candidates, but the meat of the reporting centered on the current Democratic frontrunner, the celebrated and inevitable Hillary Clinton. The story, which seemed mildly disapproving, (surprising in light of Hillary’s usual fawning coverage) mentioned, in a somewhat chiding fashion, that Mrs. Clinton will “…rub some very famous elbows in her cash quest.” The loot will no doubt pay for Hillary and her entourage to fly first-class, stay in five star hotels, enjoys gourmet meals, and make a few more ritual speeches denouncing income inequality. Nice work if you can get it? I’d say so!

According to the news piece, next week Garrison Keillor, noted radio host, author, and conservative hater, will throw a fundraiser in Minneapolis and the next day Warren Buffet will host a bash of his own for Hillary supporters in Omaha. This Omaha affair sounds particularly lucrative, since the donors who pay $ 27,000, or more will be invited to a private reception, where they will kiss the ring of her royal highness. Later in the week the road show travels to the Big Apple where Drew Barrymore will partner with a lesser light, the supremely untalented Chelsea Clinton, for another fundraiser. On the same night the former musical superstar “Sting” will host a Hillary Victory Fund affair wherein the family will be represented by former president, and Hillary’s estranged husband, Bill Clinton. Tickets for this shindig are bargain priced at $33,400. Don’t think for a minute, though, that this type of contribution would buy anyone access to the former president, or his former partner, the soon-to-be new president.

When one totals up the take from these pre-Yuletide parties we can see that the beautiful people will be helping to give the Clintons a very merry Christmas, indeed. It seems that Hillary’s stockings, hose and pantsuit pockets will be well filled on Christmas Eve, and that this will last into the New Year. As noted above this will finance a number of speeches and policy addresses proposing a warmed over type of Bernie Sanders-like Fabian socialism for the working class, those among us who cannot host fundraisers and live off the largesse of strangers.

Campaign fundraising is, of course, the standard requiem for a political candidate and will not change, especially if the Clinton-Sanders-Obama crowd gets their way and pushes incumbent protection through in the future under the guise of campaign finance reform. Still, this latest example of Clinton shamelessness brings up a very salient point. The Hillary Clinton campaign has made no secret of the fact that they will ride the “income inequality” meme as far as they can, hopefully to the White House for eight years. It is, however, a matter of public record that the Clinton family has earned $140 million since Bill Clinton left the Presidency in 2001. Those of us who can remember the close of the Clinton Era no doubt have memories of scandalous criminal pardons, blatant theft of White House properties, and the president moaning and groaning that he would be the poorest ex-president in history, forgetting that Jefferson and Truman, among others, ended their days in poverty. We also remember Hillary Clinton in 2014 stating flatly on national television that she and her husband left Washington dead broke, and wondering how they would make a living. She conveniently forgot to mention that she had a pretty good job lined up as a US Senator from New York, and that her friends had anted up a sum northward of a million dollars to buy her a home in Georgetown, for use when she wasn’t living in NYC. She did back off of the hard luck story a bit when she found herself the butt of many jokes concerning true poverty, but the hypocrisy is stunning, and remains so to this very day.

Does anyone out there believe that Hillary Clinton really knows anything about the struggles of the working class, not to mention those truly impoverished in our midst? A child of the North Chicago area suburbs, Wellesley, Yale Law school, the Watergate Select Committee, First Lady of Arkansas, First Lady of the USA, U.S. Senator from New York, US Secretary of State, and quarter-million dollar per speech professional talker has a long list of positions, mostly because of who she married, but she certainly knows nothing of the struggles of working class people and their anxieties for the present and the future. It is truly remarkable that the Clinton machine has gotten this far with their artificial and transparent candidate and her story at all. In fact, close campaign watchers will note that her consultants have taken Hillary off the campaign trail numerous times when her glow seems to fade, and they had to retool her last summer, trying to upgrade the “likeability factor” following her lackluster campaign kickoff event.

The only ones who seem to be taken in by the never ending Hillary show are the mainstream media. These are the people who have fronted for Mrs. Clinton since the 1990s. They ignored her central position in all of the Clinton scandals. They argued for her plausibility as a presidential candidate before she had run for any position, even dog catcher. They shrugged off the impropriety of Clinton donors buying her a home in a tony neighborhood days before she was sworn in as a US senator. The media also covered up Hillary’s numerous verbal gaffes including the famous one about illegal immigrants as “…the people who mow our lawns, who care for our children and who clean our houses…”, once again illustrating her lack of understanding of life as lived by most normal Americans.

Now, just days before Christmas, the Hillary Clinton money machine cranks up and plunges into overdrive. The Clinton family, immune to embarrassment, and seemingly tone deaf concerning hypocrisy and impropriety rolls on, with another taxpayer-funded eight year lease at 1600 Pennsylvania Avenue their chosen destination. America will survive this disgraceful family, but as a nation and as a culture, we will be worse off for the Clintons.