The Redskins, Liberalism and Public Opinion: The Way We Live Now 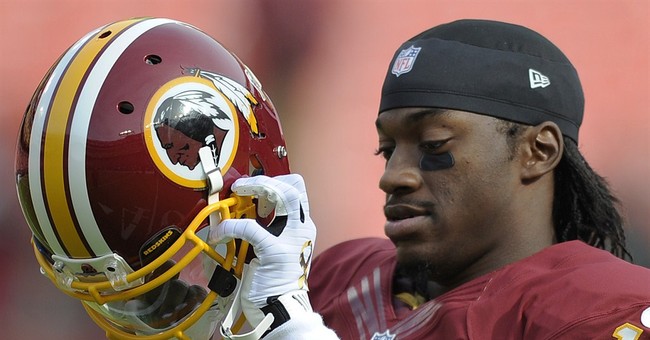 The current politically correct imbroglio over the Washington Redskins and owner Daniel Snyder’s stout refusal to appease the bloodhounds on his trail by surrendering will probably soon pass, regardless of the eventual outcome. The demands of the modern 24-hour news cycle guarantee that this will not last too long. This mini-controversy does, however, serve to illustrate the nature of the manufacturing of public opinion by the standard bearers of cultural liberalism and their allies in the mass media, circa 2013. Simply put, the Left decides that something is “offensive” and uses its media access to declare this object impermissible, or “out of bounds” to use a gridiron term. The media then goes to work and, through relentless pressure, convinces huge numbers of people that the media view is the only legitimate vision, thereby silencing opposition.

Consider the current controversy over the Washington Redskins. The political correctness police have been on this so-called issue for a number of years. Those readers with long memories can return to those thrilling days of yesteryear, namely the early 1990s. The Left raised a ruckus in those years over the Kansas City Chiefs, the Florida State Seminoles and the Atlanta Braves, respectively. Most Americans, with the exception of certain craven university administrators, dismissed this tempest as a classic example of self-conscious political correctness, complete with the requisite dollop of preening moral superiority that characterizes these exercises. The matter then rested, albeit uneasily, for roughly twenty years.

Now interested people can sense an indecisive NFL commissioner who is susceptible to pressure, and might cave on the issue. President Obama got into the act last week and suggested that the Redskins should change their nickname because, “…it offends a sizable group of people.” Since the Left now has the official sanction of their leader this becomes a crusade. The mass media will take up the issue, framing it as a morality play with those who insist on the Redskins changing their nickname cast as the heroes, and the die-hards who cling to tradition characterized as the villains. The media echo chamber will attempt to quell dissenters by hurling invective and abuse in their direction, thereby intimidating most people into silence. The Left will deal with the last holdouts by isolating them and letting them no that they are no longer invited to the party.

This treatment falls short of the totalitarian notion of the Big Lie, being the idea that a falsehood repeated often enough takes on truth in the minds of those who are forced to listen. It is more of a modern variation of the idea popularized by Saul Alinsky, that the best way to discredit one’s enemies is to subject them to constant mockery and ridicule, and to plant the idea in the minds of the larger public that the targeted group is truly beyond the bounds of permissible discourse. This tactic has worked well, when adopted by the Left and the media in the recent past. Since the 1970s we have seen major societal shifts in civic attitudes toward public smoking, the consumption of liquor, eating meat, and wearing fur. Those are largely matters of individual preference but we have seen media directed campaigns considering obscenity standards on television, and most consequentially on gays in the military and, now, gay marriage. The Left and their media allies have been able to draw the lines of argument and permissible dissent in these public brawls and that is why they have triumphed, usually in the face of significant initial opposition.

The Left had grown very sure of their control of mass media until about 1995. Now, however, the Left has lost some of their former ability to slam their opponents with the development of 1990s phenomena like talk radio, the internet and Fox News and more recently through the employment of social media like weblogs, Facebook and Twitter. Conservative websites like this one have broken the liberal “news” monopoly, and provide a resistance point for those unwilling to accept the liberal formulation on most important sociocultural issues. The fact that these new media outlets have become quite important can be measured in the rage that the Left directs at them, especially Fox News. If an opponent is really no more than a mere annoyance one would waste no time with criticizing them, but the liberals unrestrained fury at Fox News shows that they have struck many nerves.

No one yet knows how the Redskins battle will play itself out. Dan Snyder seems resolute in his stand, but his fellow owners could bring a lot of pressure to bear. Roger Goodell, the NFL Commissioner, could conceivably order Snyder to change the team name. The National Football League has proven itself controversy-averse in the past (the league essentially vetoed the prospect of Rush Limbaugh as a part owner of the St. Louis Rams during the last decade) and might well decide to avoid difficulties by “encouraging” Snyder to change the nickname or sell the team. What the casual observer can see here is, once again, the ability of the Left and their media allies to create a crisis where none exists, and to relentlessly push their agenda by any means at their disposal. The world, of course, has greater problems than the nickname of an American football team, but the cultural implications of this type of bullying and censorship are very troubling, indeed.