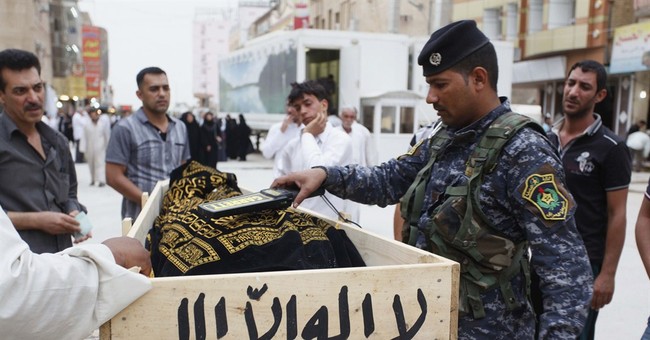 Once upon time, during the bad old days of the George W. Bush presidency, media sophisticates took the administration to task for the supposedly “shifting rationales” that Bush, Cheney, Rumsfeld & Co. employed to justify the March 2003 invasion of Iraq. The media narrative proceeded along the assumption that the Bush Administration offered many variable explanations for the Iraq invasion and changed the story every time a supposed “reason” for the invasion came up empty. The media charged that the Bush people said the invasion was undertaken to break a terrorist state in the Near East, then argued that the war was undertaken to bring 9/11 co-conspirators to justice, later claimed that the invasion was launched to seize Saddam Hussein’s weapons of mass destruction, and finally claimed that the war was waged for the purpose of bringing democracy to the long-suffering Iraqi people.

The TV and mainstream print media roundly ridiculed Bush and his people for these supposed untruths, little caring that the WMD were clearly off loaded to Syria in the days before the invasion. It was also more than passing strange that the Administration made no mention (and the media certainly clammed up) of the fact that Saddam Hussein headed an outlaw regime, and attempted to murder a former U.S. President in 1993. The Bush Administration may have been overly optimistic in assessing the climate in Iraq in 2003, and they may have allowed a certain level of mission creep to take hold later that year. In any event, the media decided that the Bush Administration had continually shifted the rationale for the Iraq invasion, and they made a great deal of hay with this charge.

If one fast forwards ten years to 2013, we see some startling similarities between the “shifting rationales” of the Bush Administration’s justifications of Operation Iraqi freedom, and the same methodology employed by the Obama Administration in its efforts to stonewall and thwart the investigation of the Benghazi debacle last September. In this instance, President Obama, the post-partisan, non-ideological professor-in-chief came into office vowing to rein in the overreaches of power by the Bush Administration, but in the Benghazi disaster he has taken many positions, blamed many sources, and shifted many rationales in a concerted effort to cover up the facts of this story.

In the very beginning we were told that Muslim anger over an obscure YouTube video led to spontaneous demonstrations that simply boiled over into a murderous rampage. When this paper-thin excuse lost all plausibility the regime admitted that this had been a terrorist attack, but they instructed their public relations flacks to downplay this as much as possible, so as not to rile voters who might think twice before re-electing a President who shrugs off an attack on American soil as unimportant. (Yes, a diplomatic post is American soil!)

A number of months later, when the Secretary of State testified on this matter after a six week delay, she changed the rationale by shouting her now infamous, “What does it matter” exclamation at her questioners. This seemed to have the intended effect of intimidating and quieting the GOP Senators, who treated Mrs. Clinton with kid gloves for the remainder of the hearing. It was, however, little noted that the early rationale had now changed.

So, no one had yet gotten to the bottom of the story. The administration then admitted that they had sent Susan Rice of the State Department onto the Sunday morning talk shows to spread the YouTube video misinformation, they later admitted that they had prepared the talking points memos used by their propagandists, but then they changed the story again. It now seems that Obama’s people have decided to pin responsibility on the CIA for the talking memo editing which downplayed terrorism, despite the clear facts that the White House was intimately involved in the process.

What has been the reaction of the major media to the various versions of this story? Much of the coverage of the congressional hearings by the television networks has been markedly disdainful in tone, taking a cue, perhaps, from President Obama, who has dismissed the hearings as a “sideshow”. The print media has been harder to characterize. The Associated Press accepts the Obama Administration’s “…we didn’t know anything” mantra at face value. The New York Times gives Obama a similar pass, but noted that they find him “baffling” and “enigmatic”. E.J. Dionne at the Washington Post, meanwhile, blames the Republicans for creating a scandal and slights the matter by declaring, “We know American politics are dysfunctional”, and deriding the fact that “…an elite expends so much energy feuding over how bureaucrats rewrote a set of talking points.” The casual reader wonders whether these media outlets would have been so sanguine in the face of official Republican misfeasance of this type while holding the Presidency.

In regards to the Benghazi scandals there are still questions to be answered, inconsistencies to be resolved, and possibly more shoes to be dropped. There is one thing the world can, however, count on. The President will benefit from yet another pass from an adoring media, who have invested incalculable capital in his success. Moreover, as new public opinion polls show, Obama’s public reputation is not suffering over these scandals as those who love him do so blindly. Lesley Stahl, the CBS-TV reporter dubbed Ronald Reagan “The Teflon President” back in the mid-1980s, because, as she put it with a mixture of frustration and disgust, “…nothing ever sticks to him.” The 2013 equivalent is Barack Obama, the President who has the media in his pocket. Ergo, he can fall into a sewer and come out smelling like a rose.