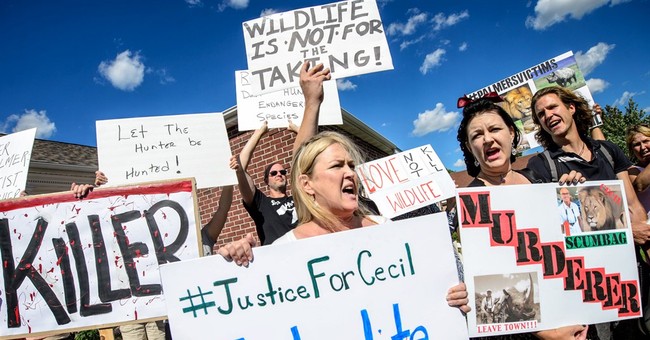 Cecil the Lion is killed by an American dentist on safari and much of America – including Jimmy Kimmel and others whose thinking goes no deeper than a Facebook post – is up in arms (no pun intended) about it.

Meanwhile, Kate Steinle is murdered in San Francisco as a result of an immoral, unlawful immigration policy, and undercover videos reveal that Planned Parenthood, the nation’s leading abortion provider, is likely trafficking the remains of aborted babies, and unlawfully changing its abortion procedures to obtain the best possible “specimens” for resale on the tissue/organ market. The same people outraged over Cecil are silent about the death of Kate and the unborn.

Anger reveals a lot about a person’s values and their priorities. In the case of Cecil, Kate and Planned Parenthood, it is evident many liberals/progressives in this country, especially in the major media, regard the death of a lion as more outrage-worthy than the death of an American woman and countless unborn Americans.

It's not about the rule of law. The lion’s killer, Dr. Palmer, apparently broke no laws. Juan Francisco Lopez-Sanchez, the man who shot and killed Ms. Steinle, was a serial felon and five-time deportee. And Planned Parenthood apparently violates a host of federal laws regulating the sale of fetal tissue and organs.

The liberal/progressive mind cloaks itself in the mantle of laws and constitutional rights, e.g. gay “rights” and “choice,” but when the laws don’t fit the agenda, the laws are the first to go.

Nor is it about the sanctity of life, human dignity, and personal ennoblement (a la Justice Kennedy). One would think that most decent people would consider humans to have more intrinsic worth than a lion. But is that true anymore?

Radio talk show host and author Dennis Prager often cites an informal survey he conducts when speaking at liberal universities. He asks the audience whether they would save their drowning dog or a stranger. Shockingly, most answer their dog. The answer illustrates the dynamic at work here.

The unifying factor in the lack of liberal/progressive outrage over Kate Steinle’s death and the Planned Parenthood story is an utter disrespect for the intrinsic value of human life and the rule of law when life and the law conflict with progressive priorities.

Further, stop and consider that: liberal/progressive priorities often stand in opposition to preserving human life and enforcing the rule of law. In other words, human life has no meaning, and the law is irrelevant, when they get in the way of the progressive agenda.

What is the progressive agenda?

In the case of Planned Parenthood, the priority is not female health or “choice,” but huge profits from millions of transactions involving the taking of innocent life, and apparently, tissue and organ harvesting and trafficking.

In the case of Kate Steinle and illegal immigration, the progressive priority is not “bringing people out of the shadows,” or “keeping families together,” (the man who allegedly shot Ms. Steinle crossed the border to commit felonies, not join his family) but instead opening the borders to all illegal aliens, criminal and not, to ensure a steady stream of future Democrat votes.

Instead, both are simply means to support the ultimate progressive goal: raw political power without compromise. President Obama has said he would rather shut down the federal government than reduce Planned Parenthood’s funding. He vowed to veto any funding bill that withdraws federal money for sanctuary cities.

Of course, this kind of amoral, lawless authoritarianism is nothing new. The horrors inflicted by communists (yesterday’s progressives) in the 20th Century bear witness to the savagery and oppression that result when life is not sacred and laws have no meaning. The four Americans held hostage in Iran, Christians in China and political prisoners in Cuba know these truths all too well. The Cecil fracas simply reveals a more benign, “first world problems” version of this dynamic.

There will always be wild animals to protect, and they should be protected. But who will stand up in protest for the Americans murdered as a result of sanctuary city policies? Or the millions aborted by Planned Parenthood for profit? Probably not Jimmy Kimmel.