Brent Bozell and Tim Graham
|
Posted: Sep 28, 2018 12:01 AM
Share   Tweet
The opinions expressed by columnists are their own and do not necessarily represent the views of Townhall.com. 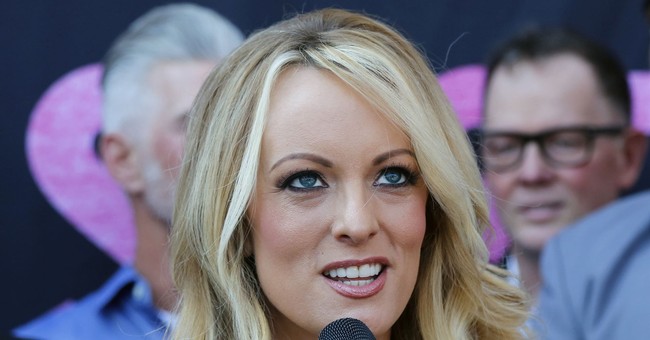 Vogue magazine, run by Democrat fundraiser Anna Wintour, has a splashy, big story in the latest issue called "Stormy Daniels, Resister-in-Chief," complete with photos of dolled-up Daniels in a swanky blue gown. Wintour glamorized Hillary Clinton on the cover but would have never, ever nudged her photographers to put a glossy touch on Bill Clinton accusers like Gennifer Flowers or Paula Jones.

Vogue's puff piece was penned by Amy Chozick, who covered Hillary Clinton's losing campaign for The New York Times. Chozick gushed: "She is blunt, foulmouthed, funny. I ask her for more details on her alleged 2006 affair with Trump." Daniels quipped: "How many details can you really give about two minutes? ... Maybe. I'm being generous."

Chozick also labored to paint Daniels as another suburban mom, saying, "friends think of Daniels as Hannah Montana, the pretty girl with the double life." Someone should tell her that was a kiddie show on the Disney Channel, not on Penthouse TV.

The Washington Post also promoted Daniels' book with a review on the front page of its Sunday Outlook section on Sept. 23. The Post has been absolutely allergic to reviewing substantive best-sellers by conservative authors like Mark Levin, yet it rolled out the red carpet to promote a memoir by a surgically enhanced sexpot who sells T-shirts of herself dressed in lingerie with the words "Don't make me spank you."

The Post claims to be all about facts, but book reviewer Jill Filipovic insisted on denying obvious facts in her review: "Stormy Daniels would like to set the record straight ... She's not a gold digger or an attention seeker or a bimbo looking for her 15 minutes. And she's definitely not a liar."

Then came the book blurb. Filipovic approvingly concluded: "Her book is not exactly a gripping read or a remarkable piece of literature, but it's blunt, funny and authentic. She is all the things women are not supposed to be. And yet you like her -- not in spite of her rule-breaking but for it. Perhaps more important, when you read her story, you believe her."

Naturally, the publisher skipped the "not a remarkable piece of literature" half. No one's going to write, "Move over, Maya Angelou." It's OK; the book advance has been cashed. For the media, good taste won't be back in vogue until a Democrat sits in the White House again.