Hillary's Insane Charge of the Media as Pro-Trump

Brent Bozell and Tim Graham
|
Posted: Sep 20, 2017 12:01 AM
Share   Tweet
The opinions expressed by columnists are their own and do not necessarily represent the views of Townhall.com. 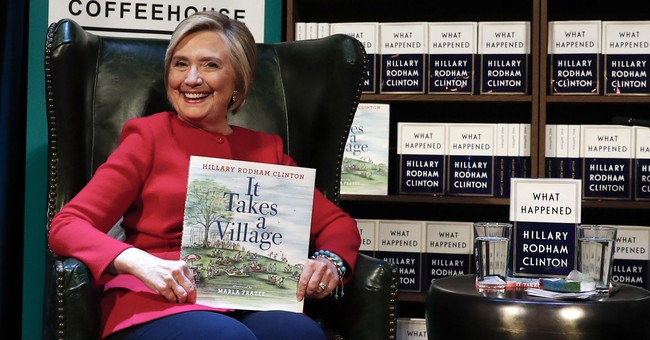 Of all the ridiculous excuses Hillary Clinton could possibly make on her book tour to explain why she couldn't win the 2016 presidential election, the most ridiculous has to be that the national media favored Donald Trump.

The easiest way to point and laugh? Witness the Clinton-loving media greet that ludicrous insult as very credible and worth considering. The folks on NBC's "Today" show just nodded along. Clinton unspooled her guilt trip in a video interview with Ezra Klein for the leftist site Vox. She claimed, "We don't control the media environment the same way the right does."

Call it The Vast Right-Wing Conspiracy 2.0. She did the exact same thing during the Monica Lewinsky mess: blamed the right. And Bill Clinton always blamed the press when things went sour.

Then, she unloaded a number. "But really, Ezra, when you get 32 minutes in a whole year to cover all policy, how does that work?" That refers to a study by the Tyndall Report that said the ABC, CBS and NBC evening news programs provided only 32 minutes of stories solely on policy, as opposed to campaign stories that mentioned the candidates' daily talking points on policy.

It's not crazy to say the media focused more on personalities and outrageous statements, just as Clinton's own commercials did. But it's simply disingenuous -- Clintonian -- to state that policy drew 32 minutes of coverage in 11 months.

Clinton also complained in her book that many in the media "can't bear to face their own role in helping elect Trump, from providing him free airtime to giving my emails three times more coverage than all the issues affecting people's lives combined." The footnote for that howler of a statement is an embarrassingly terrible study from Harvard University's Berkman Klein Center for Internet and Society; it's "press" sample included blogs and tweets and was judged by a computer, not actual humans.

A Media Research Center study of stories from Jan. 1, 2016, to the day before the election found that the network evening newscasts devoted more than twice as much time to Trump's controversies (1,032 minutes) than to Clinton's (488 minutes). About half of that, 245 minutes, was on her use of a private email server.

Nevertheless, CNN "Reliable Sources" host Brian Stelter respectfully aired several snippets of Clinton's laughable criticisms on his show. To her credit, reporter Amy Chozick, who traveled with the Clinton campaign for The New York Times, pushed back. "It was a little bit like it was our job to get Hillary Clinton elected," she said. Bingo! She added: "Don't forget they wanted to run against Donald Trump. They wanted him to get all the legitimate Republicans out of the way."

Chozick also argued that if Clinton had desperately wanted to talk about the issues and not her email practices, she did a terrible job of granting interviews. She stated: "The Times probably put in 50 interview requests to talk about her jobs plan, economics, national security, foreign policy. I asked to talk about her time at the Children's Defense Fund, her work with women. ... They were very cautious. They said no to all of that."

One reason Trump dominated the airtime is Clinton refused to give a press conference for more than nine months. The press just accepted that. They didn't punish her for it. By contrast, Trump had 15 or 16 in that time span and granted a pile of interviews.

All this demonstrates that the media display no self-respect when it's suggested they were all Trump lackeys without a conscience for the country. Where's the fight? Where's the rebuttal? Where's the disgust with such a shameless falsehood? The chin stroking just underlines that they were in Clinton's pantsuit pocket then and they remain there today.