Brent Bozell and Tim Graham
|
Posted: Mar 31, 2017 12:01 AM
Share   Tweet
The opinions expressed by columnists are their own and do not necessarily represent the views of Townhall.com. 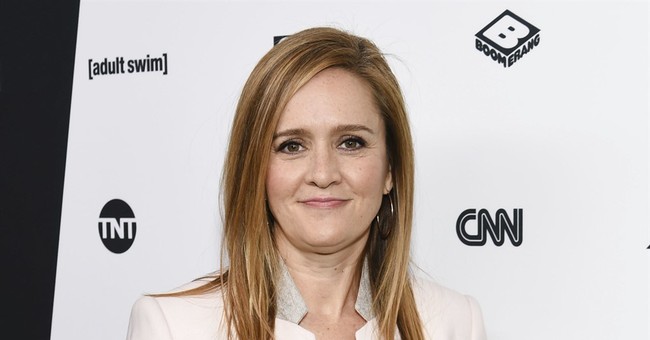 One might think that Fortune would want to keep a sober reputation as a magazine for business executives. But it made a fool of itself. It came out with a list of "The World's 50 Greatest Leaders," and on that list was once-a-week late-night TBS "comedy" scold Samantha Bee.

It's one thing when a news magazine is hunting for cultural influencers -- and the left always picks its favorite people, whether or not they actually sway anyone outside the liberal bubble. But the fiercely feminist "Full Frontal" hostess isn't a leader, unless you mean she's one of America's greatest Trump-era producers of rage and bitterness.

As might be suspected, the left-leaning Fortune editors selected Bee (and ranked her No. 19, ahead of former Vice President Joe Biden and Supreme Court Chief Justice John Roberts) because they're making quota picks. The hip-shaking Colombian singer Shakira also made the list. Bee was selected as a "rare female voice" in the gaggle of late-night liberals.

Writer Tom Huddleston Jr. proclaimed: "Bee became an essential voice in late-night television in 2016 with the debut of her TBS show ... and the Canadian-born Bee used her show as a weekly platform for dispensing incisive and often provocative political commentary while standing out as a rare female voice in an overwhelmingly male late-night landscape."

Huddleston also argued that Bee has regularly triumphed over "The Daily Show" in ratings, which isn't much of a triumph (and ignores the fact that her show airs at 10:30 p.m., a half-hour before "The Daily Show"). She loses routinely to Sean Hannity, and he's not named one of the greatest leaders.

By the very nature of television, a vast majority of Americans have not defined Bee as an "essential voice" in their lives. Liberals call Bee "incisive and often provocative" because those are the adjectives they choose for her mocking a man at the Conservative Political Action Conference for having "Nazi hair," and then having to apologize because he has cancer.

The danger of naming Bee a world leader is she'll actually think she's doing something mature and serious, instead of scribbling hateful graffiti on the wall.

Bee and her writing partner, Jo Miller, gave an interview to Virginia Heffernan at Wired magazine, who hailed them saying, "they're not trapped by the creaky machinery of equal time, false equivalency, and sham neutrality."

Miller declared war on Team Trump, saying: "It's gonna be a long war. And we have to pull our head out of our American ass. This is a global shift. So it's important that we tell real stories on our show." Bee then added: "Everything's grounded in research and journalism. We have a team of journalists working here, and a fact-checker. We care deeply about facts."

Even Heffernan was wondering about that, asking whether someone could think they're speaking literally and not metaphorically if Bee says things like "they have their hands on our vaginas." Bee's blasts do not dwell heavily on facts. She has said that Sen. Ted Cruz is a "fish-faced horses--- salesman;" that former Gov. Mitt Romney was "soiling his temple garments at the thought of brokered convention"; and that the Republican convention was a "rage-a-thon featuring a parade of hemorrhoidal has-beens."

If Bee cares deeply about facts, there's not much room for them in between the harangues. If this show is "grounded in research and journalism," then journalism is dead, and research is deader. The magazines that celebrate Bee the "world leader" are next.