Susan Sarandon Is Burning for Bernie

Brent Bozell and Tim Graham
|
Posted: Apr 01, 2016 12:01 AM
Share   Tweet
The opinions expressed by columnists are their own and do not necessarily represent the views of Townhall.com. 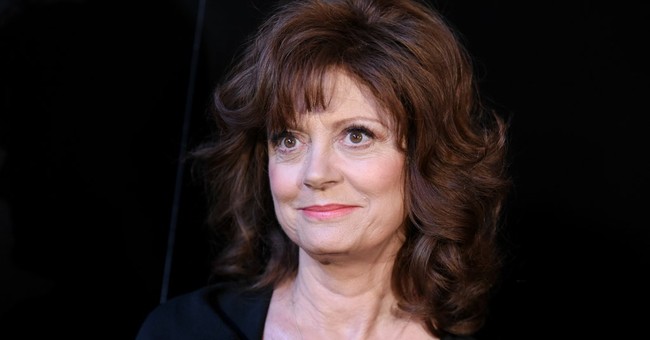 Editor's note: This column was co-authored by Tim Graham."

Actress Susan Sarandon embodies the definitive caricature of the raving socialist who brims with "compassion" and with an estimated net worth of $50 million. She infuriated many liberals by telling MSNBC host Chris Hayes on March 28 that she can only envision Sen. Bernie Sanders for president: "I really want to be on the right side of history, and this is a shot that we're not going to have again in my lifetime, to have a candidate that is so morally consistent," while Hillary Clinton is "inauthentic" and a stalking horse for Wall Street, fracking or Monsanto.

She wouldn't relent, saying she'll "see what happens" if it comes down to Clinton and Trump: "Some people feel Donald Trump will bring the revolution immediately. If he gets in. then things will really, you know, explode." She didn't mean Trump would be the revolutionary, only that he would cause America to become unglued and make things ripe for a revolution. Trump could be another Somoza or Batista.

On March 27, The New York Times featured one of its Table for Three discussions at Il Cantinori, which The Huffington Post calls "the hot restaurant for the Greenwich Village celebrity crowd." There, Times reporter Philip Galanes interviewed Sarandon and Sen. Cory Booker, D-N.J.

Sarandon dragged out her old story of redistributionist compassion as a child: "Even as a kid, I rotated my dolls' dresses so every one got a chance to wear the good one. I think it's innate. Or maybe it's about being the oldest kid in the family, the caretaker?"

She also proclaimed that she fell into acting as she was a seeker for social change: "I wasn't interested in acting. But it was the 60s. I was a seeker. And what acting depends on is imagination, which creates empathy and also leads to activism."

Nowhere in this sprawling interview did Galanes refer to Sarandon as liberal, leftist, socialist or even progressive. His lingo describes her as an activist who "has spoken out on a wide range of social, environmental and political causes." Booker is similarly described. The original print headline was "On Purposeful Paths," but it was modified on the inside pages to "Choosing a Purposeful Path."

To Sarandon, being in a business where she's placed in another's shoes almost "(forces) compassion. I get to show you that you can identify with someone you never thought you'd be able to feel for. That's what 'Dead Man Walking'' is about. We all make mistakes. But by connecting with the divine in each other, we can be redeemed." And so, being a socialist naturally follows.

Despite Sarandon's compassion for Death Row prisoners, she couldn't muster the same feeling for unborn babies. She told the Times that her parents had nine kids "thanks to Catholic indoctrination on birth control."

We wonder which one they wish weren't alive. Maybe Susan?

Galanes asked them to take a stab at the hot topic of political correctness. Sarandon was horrified when he said he found it almost refreshing to be called the F-bomb for a gay man: "'Politically correct' is almost as good an expression as 'right to life.' There's nothing political about hatred, and there's nothing correct about it, either. We need to have a dialogue about where the hatred comes from."

Galanes then shifted the interview to the "scary problem" of the mass incarceration of black men and boys. Sarandon shot back: "What are you afraid of? You're a privileged white guy. You'll get off." She lamented the privatization of prisons so companies and lobbyists can "make money by rounding up a population without a voice."

No one asked about that $50 million and why Ms. Compassion won't part with it.