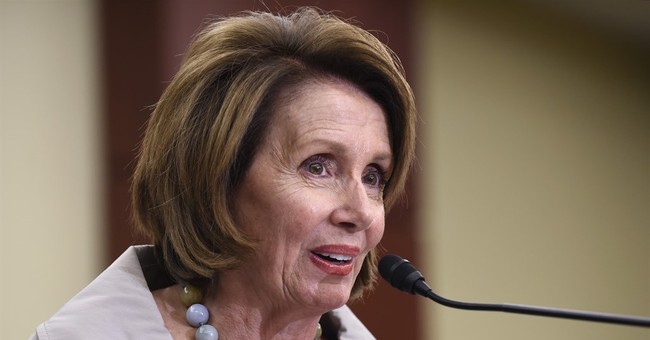 Trending
In January, House Minority Leader Nancy Pelosi was asked by a reporter if an unborn baby at 20 weeks is a human being. She shot back that when she was a new member of Congress, someone quipped, "Nancy Pelosi thinks she knows more about having babies than the pope." She added, "Yeah. That would be true."

That same smarter-than-the-pontiff feminist arrogance unfolded again on Oct. 1, a few days after Planned Parenthood boss Cecile Richards testified to Congress regarding that group's fetal body parts-for-profit scandal. Sam Dorman of our news outlet CNSNews.com asked Pelosi a very simple and pertinent question. "In reference to funding for Planned Parenthood: Is an unborn baby with a human heart and a human liver a human being?"

Pelosi, clearly stunned, first replied "Why don't you take your ideological questions --". She wanted to say "and shove them," but restrained herself. Undeterred, Dorman repeated the question a different way. "If it's not a human being, what species is it?"

Pelosi, clearly angry now. refused to provide an answer. Instead, she lectured: "No, listen. I want to say something to you. I don't know who you are and you're welcome to be here, freedom of this press. I am a devout practicing Catholic, a mother of five children. When my baby was born, my fifth child, my oldest child was six years old. I think I know more about this subject than you, with all due respect."

There wasn't really any respect in there at all. Dorman tried one more time. "So it's not a human being, then?" She replied: "And I do not intend to respond to your questions, which have no basis in what public policy is that we do here."

The Center for Medical Progress videos clearly show Planned Parenthood personnel pawing around in dishes full of fetal body parts, discussing how valuable the "specimens" would be in sales to researchers. Pelosi, like Planned Parenthood itself, pretends that federal funds never support abortions, so it follows that everything the abortion giant does with baby corpses is not a "public policy" issue.

The same reporters who fell all over themselves with partisan glee when House Majority Leader Kevin McCarthy told Sean Hannity that the Benghazi hearings had damaged Hillary Clinton dutifully ignored Pelosi's uncomfortable exchange. That, after all, was an "ideological" question, unlike the liberal media's agenda.

The same yawning happened in 2013, when John McCormack of The Weekly Standard asked Pelosi after the horrors of Dr. Kermit Gosnell's clinic were revealed, "What is the moral difference between what Dr. Gosnell did to a baby born alive at 23 weeks and aborting her moments before birth?"

Pelosi shot back: "You're probably enjoying that question a lot, I can see you savoring it." The other reporters laughed in support. She sniffed that McCormack had "an agenda."

When he continued, Pelosi naturally asserted that she was a devoutly Catholic mother of five, and that "as a practicing and respectful Catholic, this is sacred ground to me when we talk about this. I don't think it should have anything to do with politics."

To Pelosi, the right to abort is "sacred ground," never to suffer interference from politicians, and how she thinks that squares with "devout Catholic" is anyone's guess. But anyone who's denying the humanity of what's being picked apart for sale inside Planned Parenthood isn't displaying much humanity of their own. She should be excommunicated.