So Much for the Free-Speech Left 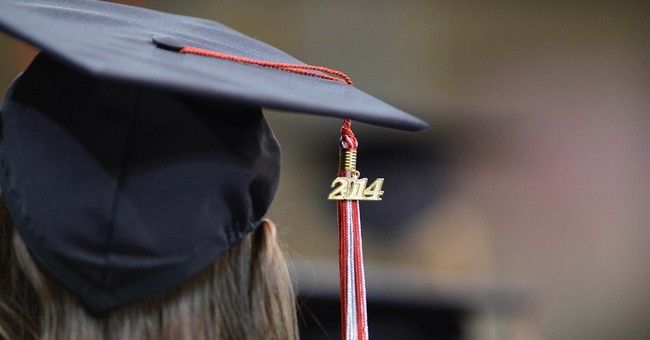 To look at virtually anything produced by Hollywood is to register confirmation that the libertine left cherishes clogging our popular culture with vulgarities. The messaging in movies, television and particularly music is punctuated deliberately and unnecessarily with all manner of language designed to offend.

But when it comes to perfectly decent speech -- spoken innocently with no bad intention -- those same liberals need smelling salts. Welcome to the wacky world of "micro-aggressions," where conversation becomes a minefield of political correctness.

It's all the rage on campuses. Both the University of California and the University of Wisconsin at Stevens Point have circulated lists of "microaggressions" to faculty for allegedly instructional purposes. The list of unacceptable words and phrases just gets longer and longer. And funnier.

To be sure, there are a couple of phrases we can agree are unacceptable. "I jewed him down" is one. "You are a credit to your race" is another. As to the rest, you decide.

In California, it included statements like "America is the land of opportunity" and "everyone in this society can succeed, if they work hard enough." We bet you didn't know these are statements of aggression. But what if we flipped that phrase? What if we were to state that "America is the land of oppression for the working man?" That wouldn't be aggression, that would be something these professors teach.

In Wisconsin, there are similar warning phrases -- "I believe the most qualified person should get the job" and "everyone can succeed in this society if they work hard enough" -- but there's so much more.

Do you believe that "America is a melting pot"? Do you subscribe to the beliefs that "When I look at you, I don't see race," and "there is only one race, the human race"?

If so, how very rude of you. Apparently, these statements are not acknowledging a common humanity. You are denying a "person of color's racial/ethnic experiences." If you believe "there is only one race, the human race," you are "denying the individual as a racial, cultural being." If you are a "store owner following a customer of color around a store," presumably because you believe he might be shoplifting, you believe he is "going to steal," and he is "dangerous." And that is wrong.

Now what if the suspicious person you're following is white? That's OK.

There's more. If you've ever asked a Black person -- "Black" and "White" are capitalized by these racially sensitive folks who don't see the irony -- "Why do you have to be so loud?" or an Asian or Latino person, "Why are you so quiet?" you are really demanding they assimilate to the dominant culture.

"Where are you from?" or "Where were you born?" signifies you believe that person to be a foreigner and that's insensitive.

Asking an Asian person to help with a math or science problem means you believe Asians to be intelligent and good in math and science, and that's wrong, too.

There are also "environmental macroaggressions" on the Wisconsin list, such as too many white characters on TV shows, or a "college or university with buildings that are all named after White heterosexual upper-class males."

The other crazy phrase of the campus censors is "trigger warnings," meaning you have to warn these college-age marshmallows before reading fusty old classic by the likes of Shakespeare or Plato. Those troublesome authors might provoke memories of past trauma on subjects like rape or death. But then one feminist from the collective insisted the phrase "trigger warning" is inappropriate since it could evoke "violent weaponry imagery." So there you have it: They're now warning about warnings.

This whole regime of speech-policing is a transparent attempt to keep white racial guilt churning at warp speed. This is indoctrination, not education.

Why, oh, why do parents send their children to these colleges taught by these nutty professors?