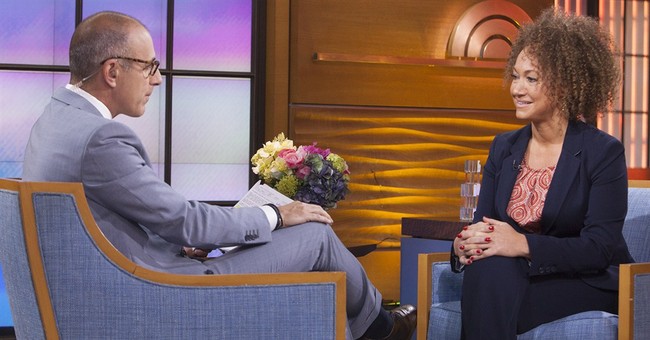 Black activist Rachel Dolezal was pressed to resign as the leader of the Spokane, Washington, chapter of the NAACP when her parents exposed her secret. Her parents are both white. They produced winsome pictures of her with straight blonde hair, freckles and blue eyes. She is a fraud.

When this story first broke on social media, conservatives were instantly amused. The irony of timing! If the liberals feel it is laudable for someone to be "brave" enough to pretend to be a gender not "assigned at birth," then why not play games with race as well?

Most blacks don't find humor here. They were quickly offended that someone would be so dishonest to pretend to be their race. Some believe it was like putting on "blackface," mocking them.

"It's kind of a slap in the face to African-Americans because she doesn't know what it's like to be black," said her adopted brother Ezra Dolezal, whose biological mother was white and father half-black. "She's only been African-American when it benefited her." She had asked him not to "blow her cover."

When exposed, Rachel Dolezal at first tried playing dumb. Very, very dumb. "I don't understand the question," she said when first asked if she was black.

But then she saw her ideological opening, straight out of the transgender revolution. If Bruce can identify as Caitlyn, why not? On NBC, she claimed, "I identify as black."

And here we go with another ride on the Insanity Express. This preposterous line has now been adopted by another segment of the loony Left. If a man is actually a woman if he chooses that "identity," a white woman like Dolezal is a black woman because she, too, believes it.

Transgenders, meet the new kids on the block: trans-racials.

Many leftists aren't happy with this conversation about trans-blackness. Gender? That's about traditional morality, and who cares? But this is about race, and that's a sacred cow. Unlike sex, the narrative of race apparently can't be undermined by relativism.

But some on the far left welcome this as another bite at the apple of deconstructionism. On June 13, MSNBC weekend host Melissa Harris-Perry sickened the racial hardliners by introducing the same leftist lingo of "transgender" and "cisgender" to racial matters. (By the way, did you know this term, cisgender? It means you accept your "birth assignment.") "I wonder, can it be that one would be cis-black and trans-black, that there is actually a different category of blackness, about the achievement of blackness, despite one's parentage?" Race, she suggested, was a "social construct," not simple biology. It could be an "achievement."

The next morning, she welcomed her critics, including a black "transwoman" named Cherno Biko, who said: "The difference, really, between what we see with Rachel and what we see with trans folks is that Rachel had to start pretending and trans folks have to stop pretending, right?" They will not allow Dolezal play their funhouse games.

After telling Matt Lauer "I identify as black," Dolezal then granted an interview on June 16 to Harris-Perry for MSNBC, and began spinning her lies as choices. Her parents may have raised her, but they weren't Mom and Dad. Instead, she said her family is "fluid" and she identified a black man named Alfred Wilkinson as her dad, because he is "amazing."

How does this charlatan deserve one iota of credibility? Why isn't the left's response a collective "Get lost!"?