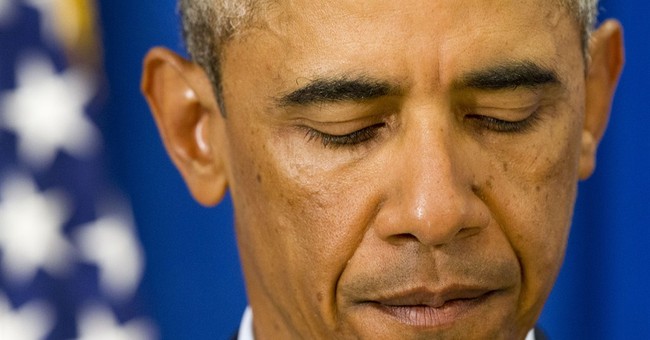 In some prominent corners of the liberal media, the grousing has begun about President Obama's habit of hitting the golf course during crises without any concern for looking cavalier. Everyone knows he joyfully hit the links at Martha's Vineyard five minutes after a nationally televised address expressing his disgust at the horrific execution of American journalist James Foley by ISIS extremists in Syria. He played nine rounds during this most recent vacation in a year filled with vacations.

On the front page of The New York Times, they reported "a firestorm of criticism erupted over what many saw as a callous indifference to the slaughter he had just condemned." Their columnist Maureen Dowd mocked him with a faux-Gettysburg Address of golf. When Dowd hits a liberal like this, something serious is amiss.

And yet even this won't shake the TV networks' support for this man. They have worked overtime to dismiss the fuss as just GOP "politics as usual," and an imposition on Obama's need for rest and relaxation. On NBC, morning co-host Tamron Hall asked, "Does the optics of this matter, or is it just politics as usual in that town?" NBC political director Chuck Todd replied "Yes, it's politics as usual, but in this case, this is optics. This was stuff they should have seen coming. This is not new to them." In other words, it was OK to do it, just not to show him doing it.

Todd noted that ex-Obama aide David Axelrod expressed regret that maybe they were too hard on George W. Bush's summer vacations in Crawford, Texas. Democrats also loved mocking his dad's cigarette-boat rides as elitist when he vacationed in Maine. They also ridiculed President Reagan for chopping wood in California. So what's the difference? So did the networks, bobbing along with the Democratic attack line of the day.

If picking on vacation optics is cheap "politics as usual," then journalists should look at themselves as serial offenders, at least when the president's a Republican. With Obama, and before him Bill Clinton, the vacations were virtually romantacized by the press. Remember that silly photo of the Clintons awkwardly dancing on the Dominican Republic beach? Media outlets have had trouble finding anything elitist-sounding about the Obamas (or the Clintons) hanging out with the upper crust at Martha's Vineyard, even after they depart Washington, D.C., with jabs about the excesses of the greedy rich.

It's obvious at this point that Obama simply does not care about the optics of his golf obsession. George W. Bush gave up golfing in 2003 to avoid the optics during wartime. Obama seems to have doubled down, petulantly.

If the TV networks are ignoring this president's scandalous behavior, others aren't.

The New York Times also reported that "Nearly six years into his term, with his popularity at the lowest of his presidency, Mr. Obama appears remarkably distant from his own party on Capitol Hill, with his long neglect of would-be allies catching up to him."

In interviews with the Times, "nearly two dozen Democratic lawmakers and senior congressional aides" suggested Obama's distaste for schmoozing with Democrats "has left him with few loyalists" to help him manage his "legacy" as his term winds down. He's even refusing to golf with members of Congress.

Even with these few press reports, the national media's optics police are still mostly lounging around.CNSNews.com noticed that Team Obama sent three representatives to the funeral of Michael Brown -- underscoring his victimhood status, which is a disgraceful activity for the federal government when the investigation is far from complete -- to assuage the enraged black activists across America. But the White House sent no representative -- not even a former press secretary like Jay Carney -- to the funeral of slaughtered journalist James Foley.