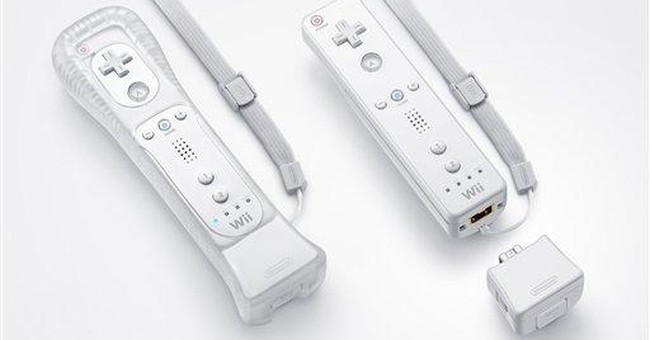 Most parents think of video games as a child's pursuit, especially the innocent ones. Many people who bought a Nintendo Wii video game system would consider this the most innocent of them all. They watch their children play "Super Mario Bros." on it, or join the family in playing tennis, golf or baseball with their little childlike "Mii" characters on Wii Sports.

A new ad by the French game manufacturer Ubisoft advertises a new game for the Nintendo Wii suggestively titled "We Dare," describing it as "a sexy, quirky party game that offers ... hilarious, innovative and physical, sometimes kinky, challenges. The more friends you invite to party, the spicier the play!"

Here we go. In a YouTube ad for the game, two young couples are shown kissing the controller together, including both girls. Graphically, the game looks simplistic and cartoonish, a typical "Super Mario" adventure. As suggestive music plays, one of the girls puts the controller in the back of her skirt and goes over one of the men's knees for some simulated spanking time. Then the girls are spanking each other. Then the men are stripping. The ad ends with the screen going blurry and reading "Enter Parental Code."

That's merely an invitation to join in nudity and sex, since Ubisoft isn't really concerned about parental codes. The game just went on sale in Australia, and that country's silly supposed self-regulators gave it a meaningless PG rating. The local ad there included couples "stripping to their underwear" with "suggestions of pole dancing, group sex and partner swapping."

In England, it's a similar outrage. It's been rated "12 Plus," which has infuriated parents. Laura Pearson of Birmingham told London's Daily Mail: "I have a 13-year-old daughter and if I knew she was playing such a highly charged sexual game with boys, I would be appalled. It is encouraging underage sex."

Ubisoft has no plans -- yet -- to sell the game in the United States, since we are considered more "puritanical" than Europe. That doesn't mean they won't try if the game sells well. On Twitter, Ubisoft teased: "Will you dare watch this sexy, quirky trailer for our new party game? We Dare (Europe) will spice up your parties."

It would be one thing if video-game manufacturers made a mature-rated game for married adults. But that's not what Ubisoft did. They have produced a game tempting youngsters into group sex, partner swapping and homosexuality.

An Ubisoft spokeswoman told the Melbourne Herald-Sun, "The game is intended for an adult audience, absolutely. ... Honestly, the game can also be played in a non-flirty way. It is just open for interpretation."

This is disingenuous. Dressing this game in a simple "Super Mario" scheme is like putting a sex scene in a Thomas the Tank Engine game, but declaring it's for adults only. It's saying you can play the game in ways Ubisoft didn't intend. Some children who didn't want to be prostitute-murdering drug dealers in the "Grand Theft Auto" games could simply goof around on their motorcycle, too. But that's not the experience the game makers were selling.

When Xbox one-upped with Nintendo Wii with its Kinect technology -- which requires no controllers, but uses sensors to track your body movements -- it was only a matter of time before the Kinect sex games were contemplated.

Brad Abram of the Austrian-based company ThriXXX said his company, which sells 3-D interactive sex games like "3D Sexvilla," "Fetish3D" and "3DLesbian," plans to release a Kinect-enabled sex-simulation game by May. In December, they released a video showing how a player could wave his hand in the air and stroke a scantily clad female avatar in naughty places.

Every joke about overgrown video-gamers being too nerdy to date real women is only enhanced with news like this.

So far, this line of games is being prevented by Microsoft, and a spokesman has said it "would not condone this type of game for Kinect." But some can't understand why the prudes would be so ahistorical. Kyle Machulis, a software engineer and "sex tech expert," complained to ABC News, "The Gutenberg printing press printed Bibles, but it also printed erotica."

Everyone understands that every new technology will be pornified, if someone can make an Almighty Dollar from it. Someone in Austria can make brown-paper-bag video games for Charlie Sheen and his ilk.

But if most video games are going to be made and marketed for children, major game makers and their weak-kneed self-regulating boards should draw lines of propriety, and major retailers should lean on the Entertainment Software Rating Board to know those lines should be drawn strongly -- not out of respect for parents with purchasing power, but for the children whose innocence demands protection.