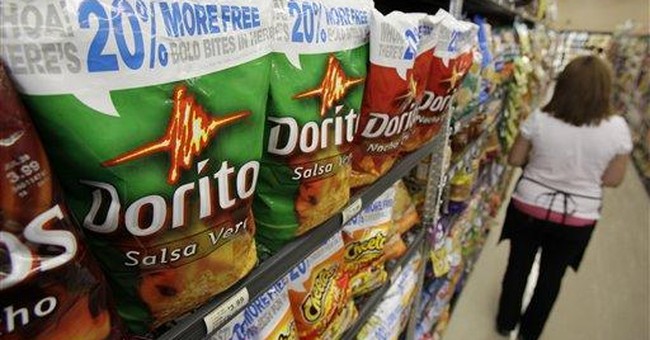 The Super Bowl is more than just a huge day for professional football fans. Part of the game's massive audience is there for the chance to see how mega-corporations creatively spend millions of dollars for one Super Bowl commercial. Some Super Bowl ads are brilliant and successful. Budweiser knows it has hit one out of the park when its ad is Monday's water-cooler talk.

But never underestimate the ability of some people to go too far, where talent and imagination are rejected for sophistry and shock. Take the ad geniuses for Doritos and Pepsi Max, who posted on YouTube some entrants in their "Crash the Super Bowl" ad contest. One entry, titled "Feed the Flock," crassly, deliberately mocked Christianity and the Holy Eucharist. Instead of offering the Body of Christ, some priests are shown lining up the faithful to receive Doritos and Pepsi Max diet cola. Their church was sinking in popularity -- until Jesus was replaced by a snack chip.

This is appalling to any Christian who celebrates 2,000 years of reverence for the sacred Lord's Supper. It's especially insulting to Catholics, whose Catechism teaches that the Eucharist is the "source and summit of the Christian life." The communion wafer is not a tasteless snack, in desperate need of Nacho Cheese flavor; it is sharing in the Way, the Truth, and the Life offered selflessly in the sacrifice of the Christ. It is the very Body and Blood of Our Lord.

The ad makers just poured moldy garbage on that. Oh, I'm sure they knew there would be outraged Christians, but there would also be a "free media" bounce, as in some "buzz" on the Internet. Frito-Lay and PepsiCo honored this inane mockery by offering it for more than 120,000 views on YouTube -- before finally taking it down.

It isn't just offensive; it's a blatant violation of their own contest rules, which clearly stated any ad submitted "must be suitable for display and publication on national television (e.g., may not be obscene or indecent, including but not limited to nudity or profanity) ... and ... must not contain defamatory statements (including but not limited to words or symbols that are widely considered offensive to individuals of a certain race, ethnicity, religion, sexual orientation or socioeconomic group)."

Are they dim-witted? No, these businessmen know what they're doing and obviously didn't fear an ad that is offensive to Christians. Never in a million years would they ever countenance the idea of similarly insulting Muslims. As one wag joked on Twitter: "I'm sure any day now we'll see a commercial where Muslims turn their prayer mats to point at the new 2011 Lexus LS."

Our national media, so exquisitely attuned to the monitors of "homophobia" and "Islamophobia," find no offense whatsoever in this online "Christophobia." In fact, in the past, they have either ignored this sacrament-trashing ... or enjoyed it.

They ignored the public radio show that joked about Mike Huckabee's family enjoying "deep-fried" Eucharist; the short-lived NBC sitcom "Committed" with a half-hour plot centered on accidentally flushing the Eucharist; or Bill Maher joking how the Catholic Church should "go gay" and chant, "We're here, we're queer, get Eucharist." But they enjoyed as "thrillingly down and dirty" the ridiculous stage production of "Jerry Springer: The Opera" that mocked the "little biscuit" of a genital-fondling Jesus character who admitted he was "a little bit gay."

These media hypocrites disgust me. Look at how they twisted themselves into the shape of a tasty Mister Salty Pretzel at the "controversy" regarding what quarterback Tim Tebow and his mother, Pam, were going to say something in a Super Bowl ad by Focus on the Family against abortion. And here's the controversy: Instead of speaking directly of how doctors advised her to abort, Pam talked about her troubled pregnancy: "I call him my miracle baby. He almost didn't make it into this world. I remember so many times when I almost lost him." The A-word was never used.

Still, the media twisted the story to portray the whole pro-life concept as tasteless. ABC's Dan Harris spoke out for "many sports fans" who found it "a great shame" that our national unity over football "could become yet another day where we are divided over politics and the culture wars."

Where is Dan Harris now? Munching on Doritos while sipping Pepsi, I suppose.