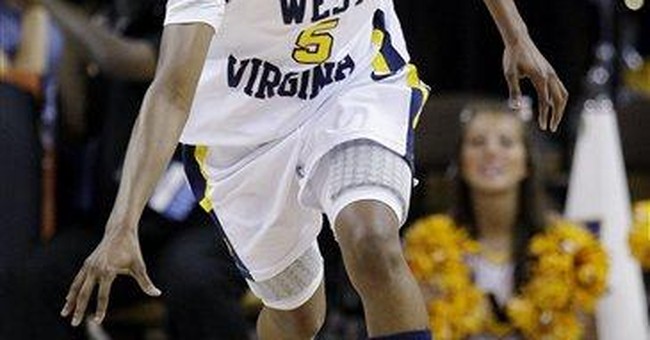 Columnists who prize equality of the sexes in college athletics often scowl at how men's athletic programs get more money and media attention. But a new frontier on the battleground of men's and women's athletics is upon us: When is a female jock really female, and a male really a guy?

Kye Allums, a shooting guard on the George Washington University women's basketball team, has decided that she is a he. Changing her name from "Kay-Kay," Allums is believed to be the first Division I college basketball player to go public about being a "transgender" person.

The obvious question is whether Allums would still be able to compete. You can't have men playing in a women's basketball program, and it's more than awkward to have a man showering with the women in the locker room. Spurred by a track-and-field controversy four years ago, NCAA rules prohibit sexual reassignment surgery or hormone treatments for athletes to retain their eligibility. Allums, a junior, has pledged to forego those steps while she retains her eligibility for college basketball.

But in the meantime, in the midst of a culture that doesn't dare utter a discouraging word about gender denial and genital self-mutilation, Allums is listed on the GWU website as a male member of the women's basketball team. All the press reports swoon about how "he" -- who remains a woman in every biological way -- is handling this so bravely as a role model: "I'm trying to be an example for other people to not be afraid of who they are."

(The Good Lord must be so grateful for the creative editing of Creation.)

Allums says a friend told her that "that a person's sex is between their legs, but that their gender is between their ears." She boasts, "My teammates have embraced me as the big brother of the team." Transgender activists insist that everyone accept their favored pronouns, despite their obvious inaccuracy. That's the kind of Allums-in-Wonderland logic that is forced upon our sports media, which can't seem to locate anyone in their good-for-you coverage that would even whisper that this is ... weird. That's apparently hate speech.

So "he" plays in a girls' league, and we should all accept that. What the transgender revolutionaries want is a culture that allows children to choose an opposing gender while they're still in school sports. In a report for the National Center for Lesbian Rights, Stephanie Brill of a group called "Gender Spectrum" was blunt:

"There are more and more transgender children today who, even at young ages, are allowed to live their lives in alignment with who they are. As it becomes common medical procedure to allow these children to transition in childhood, athletic policies need to reflect this change in the landscape of student athletes."

Mengele, call your office. These activists also insist that it's not "ethical" to require sex-reassignment surgery before a student can compete in his/her "affirmed gender." UCLA medical professor Eric Vilain insisted that requiring surgery is "medically unnecessary and not linked to competitive equity."

Anyone can look at a "transgendered female" and see that there's a glaring competition issue.

This isn't just a school issue. The Ladies Professional Golf Association is being sued by a golfer named Lana Lawless, who says her civil rights are being violated. She says she had a 1 handicap as a man, but now as a woman, she wants to join the LPGA tour even though their bylaws state that you have to be "born a female." But California being California, the state now prohibits discrimination against transgender athletes.

Lawless went on KGO-TV in San Francisco with "her" deep, froggy voice, insisting, "I don't have an advantage anymore. All the testosterone has basically been removed from my body." "She" is a 57-year-old former police officer who looks like a middle linebacker and underwent gender reassignment surgery in 2005. She is also suing the Long Drivers Association, which changed their rules after Lawless drove a golf ball 254 yards -- as a "woman."

Despite the physical evidence, LPGA commissioner Mike Whan was already backtracking under KGO's pressure. "I think to be honest with you, I think through this, I'm going to have to educate myself as well in terms of what qualifies as being female. So you know, maybe this lawsuit will make us look at it as well."

The gender-bending activists on this issue want their preferred standards of "non-discrimination" imposed nationally, all at once, in high schools and colleges, and in professional sports, to teach allegedly ignorant Americans to respect "gender identity and expression." If it takes such "courage" for Kye Allums to become honored as a public example, why does it seem that no one has the courage (or fairness in the media) to oppose or even question this war on reality?