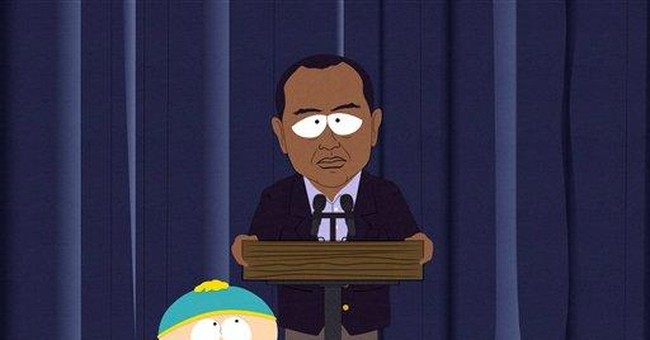 From Uppsala, Sweden comes the news that cartoonist Lars Vilks was attacked and head-butted by an angry Muslim at a university lecture. A group of Muslims surrounding him shouted "God is great!" in Arabic as the cartoonist lay on the floor, his glasses broken. Ever since Vilks impolitely drew the prophet Muhammad's head on a dog, he's been a wanted man. Even the American terrorist wannabe nicknamed "Jihad Jane" plotted to kill him.

This explains why Comedy Central's "South Park" has been censoring images that might offend Muslims. The executives at Comedy Central (and their parent company, Viacom) regularly pledge allegiance to freedom of expression, but don't really believe it -- not when they ponder someone cracking their skulls at a Beverly Hills restaurant.

It's not just "South Park." Jo Piazza of Foxnews.com reports that after the failed Times Square bombing, Comedy Central's "The Daily Show" told their "senior Islamic correspondent" Aasif Mandvi not to comment further on it. One writer for a scripted drama told Piazza that in one of his show's final episodes, there had been a minor plot involving a Muslim extremist. Last week, "it was removed and the script was rewritten."

It's clear that Mohammad is off limits -- and it's just as crystal clear that Jesus Christ remains the juiciest of targets.

Even at the sensitive time when they're shutting down every possible mockery of Islamic extremism, Comedy Central has announced their plans for a new cartoon titled simply "JC," a half-hour show about Jesus trying to live a normal life in New York City to escape his "powerful but apathetic father." God is preoccupied with playing video games, while Christ is the "ultimate fish out of water."

As "original programming," this hardly applies. A slacker Jesus came to Earth to escape an annoying God the Father as He tried to quit smoking on "Family Guy" two years ago.

On the offensiveness scale, that's nothing. In the 2005 Comedy Central special "Merry F-ing Christmas," Denis Leary called the Christmas story "bull(bleep)" and said the Virgin Mary must be a myth since someone surely "banged the hell" out of her. In the 2006 "South Park" episode that spiked Mohammad themes, the show ended with Jesus wildly defecating on President Bush: "Look at me, I'm Jesus. Would you like me to crap on you, Mr. Bush? Mmm, yummy, yummy crap!" And there was Stephen Colbert's 2008 Christmas special, where Toby Keith sang about (and a cartoon Santa laughed at) Christians blowing up an ACLU lawyer's house.

Comedy Central programming head Kent Alterman trotted out the normal line for anyone objecting to this profane new series on the god most Americans define as sacred. "In general, comedy in its purest form always makes some people uncomfortable."

Earth to Alterman: just stop with the First Amendment poseur routine there at Cowardly Central. If you're proud of "making some people uncomfortable" (Christians) while censoring your jokesters in fear of others (Muslims), you're just an anti-Christian bigot.

This "JC" show is merely in development, alongside other potential gems like "Live Sex Show" (no mystery in that title), "Rich Dicks" (ditto), and two pot-themed shows, "Highdeas" and "This Show Will Get You High." How is that for comedic genius?

Comedy Central is currently airing another religion-mocking cartoon right after "South Park." It's called "Ugly Americans," and it imagines a New York City crawling with demons, monsters and zombies. Some are even social workers at the "Department of Integration." Mark, the lead character, is a social worker who's dating a co-worker and daughter of the devil named Callie Maggotbone. One of his supervisors is a bullying demon called "Twayne the Bone-Raper."

Mark works with a washed-up wizard named Leonard, whose brother is a superstar magician named ..."Christ Angel." So it should not come as a surprise that "Christ" is a nasty guy who pulls "tricks" on women like inserting himself into their uterus, forcing labor and being "born again." He also makes Leonard punch himself repeatedly in the face.

There is a silly tendency to raise anti-social pranksters to First Amendment hero status for their willingness to be atheist jerks. The TV critics shower you with praise about how you're "profanely whip-smart" and have a "wry, postmodern vibe" -- even when there's hardly anything smart or wry in the tasteless gore and sex jokes that are the norm on this network. Having Mark meet the devil in Hell and decline an order for "unbaptized baby-arm soup" is not witty. It's just sick.

But the amazing thing is a sleazy programming chief like Kent Alterman will still claim "The beauty of working at a place like Comedy Central is you can empower people to actualize their vision in a really unfiltered way, and that's when things have the best shot at being funny."

Unfiltered? What a shameless liar.