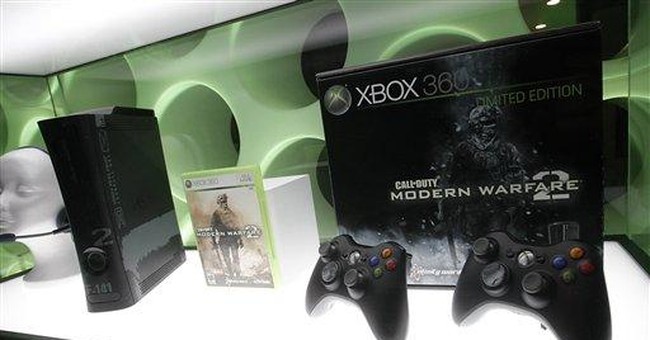 But that isn't all video-gaming boys can discover. CNN reports that Japanese porn also extends to sick video games that center on raping girls and women. One such game is called "RapeLay." The game begins with a young teenage girl on a subway platform who asks the video player in a high and tiny voice, "Can I help you with something?" The player then chooses a method of sexual assault. Players can also follow the girl onto the train and assault her older sister and her mother. Rape is not an option on the menu; rape is the entire point of the game.

As the game continues, "friends" join in. Now the females can be raped repeatedly. It even allows the player to impregnate a girl and urge her to have an abortion. Rape the girl; kill the child.

The feminist group Equality Now has moved to have this rape game removed from store shelves, but the controversy naturally has moved to the next step: It has gone viral, being offered all over the Internet, in some cases for free. This puts "RapeLay" in the same category as sicko games like the high-school shooting re-enactment game "Super Columbine Massacre RPG."

Lobbyist Taina Bien-Aime told CNN that "It's obviously very difficult to curtail activity on the Internet. But the governments do have a role in trying to regulate this sort of extreme pornography of children, both in their countries, and through the Internet." Equality Now wants the government of Japan to ban all games that promote and simulate sexual violence, sexual torture, stalking and rape against women and girls. But government officials wouldn't even talk to CNN about any government action, or even an official expression of disgust.

But what truly nauseates is the manner in which some actually defend this horror. Game players lodge the usual protest that just because you do violent things on screen, it doesn't mean you'll do them in real life. Last Christmas, the makers of the Japanese game "Shinobi Ryuu" began with a declaration that the suffering characters being denied their human rights aren't humans. They're merely fictional characters.

"We also thank all the kind people who see a character in the story saying phrases such as 'help me' and take it as a real call for help," they said. "However, even though you are worrying for the characters in the story, these are all lines spoken from a script. They are not saying all this from the bottom of their hearts."

They're suggesting the people who would object are lunkheads who can't distinguish fantasy from reality. Here's the reality: A new analysis of 130 studies by Iowa State psychology professor Craig Anderson found exposure to violent video games makes more aggressive, less caring kids -- regardless of their age, sex or culture. Common sense tells us it doesn't sound like a healthy recreation activity: "I can't wait to get home and do some subway raping to relax."

You just want to shake people who would defend a rape game. They'd probably also defend and enjoy a game where they're a plantation owner and load African slaves off a ship, sell and trade them, and beat them and rape them. Does that sound like a healthy evening in front of the TV?

Gamers also complain that it's a double standard to protest rape games, but not violent shooter games. But many critics of video-game excesses have also criticized shooter games with no basis in morality, as well as shooter-and-rape games like the "Grand Theft Auto" series. In fact, they've been attacked at the highest levels. "Those video games are raising our kids," candidate Barack Obama said in lamenting the introduction of "Grand Theft Auto IV" in May 2008.

These viral games like "RapeLay" may not be as easily acquired as that nasty series of best-sellers. But they do sound the alarm, as candidate Obama said, that parents always need to be aware that something truly evil can be found in the virtual world of video games.