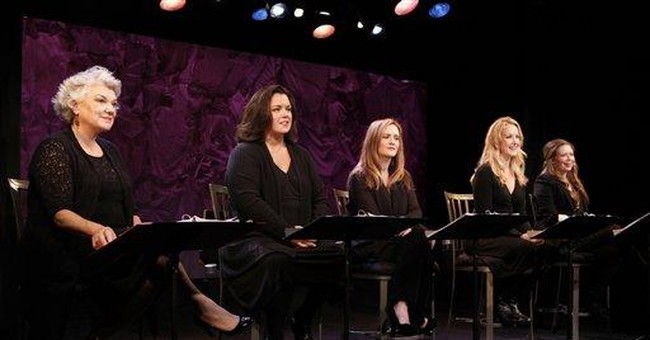 As O'Donnell explained to a reporter during her promotional tour: "It's hard to argue with the voices of innocent children telling the truth about their life and love." She's daring her opponents to try.

The show is quite obviously (and annoyingly) packaged to look like "Sesame Street," with lots of adorable children talking to the camera, musical performances by children and animated segments. Yet HBO actually had to tag the show with an "Adult Content" label. One reason came near the 40-minute show's end, when a parade of cartoon sperm danced in top hats around an egg and sang a Frank Sinatra song. (I'm not kidding.)

There is also a strange cartoon about in vitro fertilization, with O'Donnell singing about how "my science project is me" and even boasting "don't you wish you'd started life in a dish?"

Adoption is promoted, and that is good. Maya, a girl adopted from China, explains that she was born in a country with a one-child policy, and her parents loved her, but they wanted a boy. Maya looks into the camera with a twinkle and says, "I was born. That's why I feel really lucky."

But the real point of the show comes in segments like "Neil & Cole's Moms Get Married." After gay-wedding pictures are displayed as the '60s song "Chapel of Love" plays, Renee and Carrie get "married" in the backyard by a female minister who declares their "marriage" is "100 percent legal, 200 percent lovable."

Next comes "Katie & Jake's Chickens," except this isn't about Katie and Jake. The children talk about how "Daddy and Poppy" adopted them, bought some chickens and now they live on a farm.

Then viewers see O'Donnell having a chat with her youngest daughter, Vivienne, age 6, who is actually the biological offspring of O'Donnell's former partner, Kelli Carpenter. Despite this fact of life, Vivienne actually calls Rosie "Mom," and her mother "Kel." O'Donnell underlined that those are the usual titles used when asked about it on her blog. There is something simply perverted with both O'Donnell and Carpenter establishing and promoting basic falsehood to this child.

The TV star tells the little girl, "We love each other forever, and even though Mommy and Kelli aren't living together anymore, we're still a family. Family is forever. Family is love."

In reading the publicity clips surrounding the show, it's obvious that O'Donnell's four adopted children are angry and confused. O'Donnell has now moved on to a relationship with a Texas mother of six, and hopes to merge the 10 children into what she calls the "Gay-dy Bunch."

Is this a game?

The film is almost an excuse for her personal decisions. A family is whatever Rosie O'Donnell wants to assemble around herself.

Television critics knew that the political correctness cops expected a rave review. Robert Bianco of USA Today noted that the show says promotes gay unions, and "people who don't want to see such arrangements put on a par with all others should bury their heads in the sand elsewhere." He concluded: "Is it preaching a bit to the converted? Certainly. But even the converted deserve a little comfort now and then."

Neil Genzlinger in The New York Times was an exception. He said it was like "drowning in a vat of syrup," except it was too shallow to drown in. He lamented the show's "Stepford families," where everyone is happy and no one struggles.

On the promotional tour, HBO producer Sheila Nevins claimed about this show, "There are no endorsements ... It's just kids expressing what it means to be in a family." Like so much else in this project, that is a blatant falsehood. This is a 40-minute-long endorsement for gay marriage.

O'Donnell wants to take this documentary into schools "to hold discussions about families." One of the kids in the show says parents are "our role model. They teach us how to be like them." It's hard to take Rosie O'Donnell lecturing the country about marriage, family and motherhood when she is a pretender to all of them.

Maryland State Employee Under Investigation After She Was Caught Making an Absurd Comparison About Cops
Matt Vespa
Back Online: Colonial Pipeline Now Operational...But There's a Catch
Matt Vespa
Even When They Try to Get It Right, Democrats Ultimately Get It Wrong on Standing Up for Israel
Rebecca Downs
President Biden is Rushing Parents Into Getting Their Kids Vaccinated

I Will Not Be Silenced!
Townhall
'She's a rockstar': Woman lights up school board over adoption of critical race theory
Twitchy
Jen Psaki Gives Insulting Answer When Asked Why White House Has 'Shifted Tone' on Gas Crisis
Redstate
Adults in the Room: Retired Military Brass Not Afraid to Voice Their Concerns About Biden
PJ Media