The Meanness of Martha Coakley 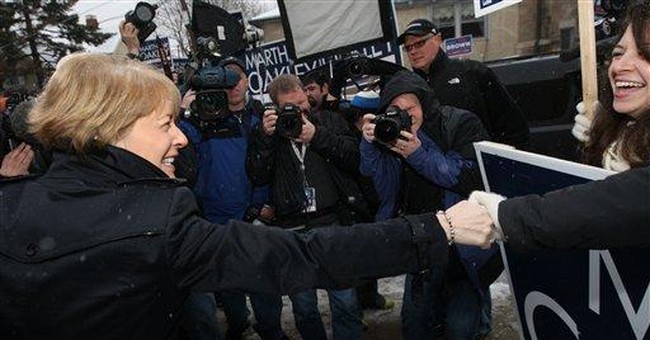 In recent years, the network news shows have raced by any political campaigns below the level of president, stopping only if the candidate is named "Clinton" or "Schwarzenegger." That principle held true for the U.S. Senate race in Massachusetts. By the time the networks arrived with just a handful of days remaining, Martha Coakley, the Democrat, had fairly well sunk, and there was nothing more to do than the tiresome "bad candidate, not faulty ideology" spin control.

In liberal-media offices, the last narrative they want for this year is "1994: the Sequel."

Boston Globe columnist Jeff Jacoby was right to joke that perhaps New York Times book editor Sam Tanenhaus may want to rush some updates to his book "The Death of Conservatism."

Here's what's being ignored, but should not be forgotten about this race: the sheer meanness of Martha Coakley and her campaign character assassins. TV reporters largely sanitized the race in the final days, refusing to cover the Coakley campaign's vicious direct-mail droppings against Republican Scott Brown. The cover-up was as shameless as the slander.

The Massachusetts Democratic Party mailed a package that announced: "1,736 Women Were Raped In Massachusetts in 2008; Scott Brown Wants Hospitals To Turn Them All Away." A TV commercial by Coakley flashed the words "Deny rape victims care" with a voiceover that announces, "Brown even favors letting hospitals deny emergency contraception to rape victims."

Team Coakley wanted the state's voters to think of Brown not as pro-life, but as an anti-abortion radical, a man so extreme that he had no compassion for female victims of a violent sexual crime. Brown's actual record was nothing like that. It was like turning Clark Kent into Jack the Ripper.

The amendment Brown proposed was a conscience clause for Catholic health facilities, which have objected that "emergency contraception" can lead to an early abortion. Brown proposed that health providers who don't want to administer contraception must have a referral policy to a hospital that would provide it. That's hardly "turning away" a rape victim. The "turning way" line is not a stretch; it is a lie.

This inflammatory and flagrantly false charge comes straight from the Bay State liberals who, 20 years later, are still complaining about the unfairness of GOP ads against Michael Dukakis about the truth of his get-out-of-jail weekend pass for that rapist and murderer named Willie Horton.

On the Internet two days before the vote, Time's Michael Scherer offered a note of journalistic independence and integrity by calling out the Coakley camp with a blog post headlined "On Contraception, Democrats Roll Towards Gutter In Massachusetts."

Doesn't that sound like the pro-abortion movement's version of "Irish Need Not Apply"?

On the same weekend that liberal reporters went on the Sunday shows and railed against the Republicans for refusing to repudiate Rush Limbaugh for suggesting Obama would milk the earthquake in Haiti for political gain, there was silence on whether the Democrats should repudiate Coakley's attacks, or whether Obama would be willing to endorse them.

In Sunday's Washington Post, political reporter Dan Balz wrote that "Obama begins his second year having failed to ease political polarization." Further, he quoted Obama from a People magazine interview lamenting he hasn't been able to "bring the country together." Balz and every other transparent Obama supporter in the press simply refused to acknowledge that the Democrats have been smash-mouth partisans trying to ram through legislation without even letting Republicans read the bills, let alone amend them.

Reporters barely noticed that Obama slammed Republican Scott Brown in his Sunday appearance for Coakley, joking repeatedly about the GM truck Brown has driven around the state. He joked that Brown parked his truck on Wall Street, and "I'd think long and hard about getting in that truck with Martha's opponent. It might not take you where you want to go," said the man trying to bring the country together.

In a race for the "Ted Kennedy seat," Obama may want to avoid perilous driving jokes. But the media was there for their usual routine: to sanitize his partisanship.

It's going to be quite a challenge for Obama to fly across the country trying to save every Barbara Boxer and Harry Reid at the same time he's the media's poster boy for ending political polarization. But it wouldn't be the first time the media presented a view of Obama utterly at odds with reality.