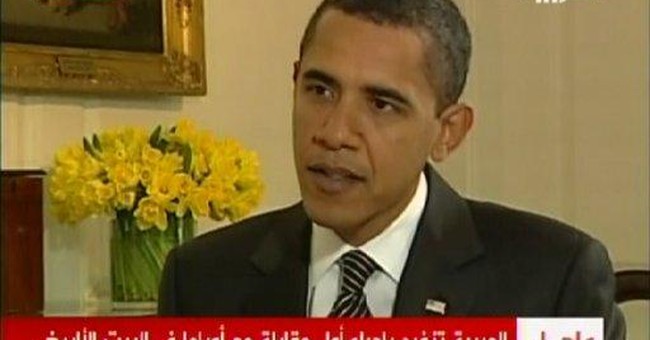 Authors often try to release their books at an absolutely perfect moment for stoking sales. Exhibit A is PBS anchor Gwen Ifill, who scheduled her liberal "era of Obama" thrill-fest about hot-shot black Democrats for Barack Obama's Inauguration Day. Tony Blankley did almost exactly the opposite. To paraphrase the famous Bill Buckley slogan for National Review, Blankley's new book stands athwart the historic Obama swearing-in, yelling stop. It's titled "American Grit," and it calls for a "new nationalism," a notion at odds with Obama's open disdain for American exceptionalism.

The left and their media allies have spent nearly every day since 9/11 painting America as an impending dictatorship, a George Bush migraine-headache nightmare of off-shore Guantanamo persecutions and foreign Abu Ghraibs. It's their goal to regain America's global popularity by promoting national weakness as an ideal. Their agenda calls for us to try everything a United Nations bureaucrat would have us do: a military in retreat, an executive branch discarding all those horrid martial powers. The exception, of course, is the impending and necessary war on the emission of carbon dioxide. We have met the real terror threat, and it is not al-Qaeda, but the gasoline-burning combustion engine. Move over, Petraeus: there's a new emissions-free sheriff in town, and his name is Gore.

One doesn't expect that Blankley's tome is going to be required bedtime reading at the White House. This may be a good thing; it will avoid a national run on smelling salts. The chapter that will send the Left into a panic is called "In Praise of Censorship."

Blankley focuses on the terrifying prospect of another attack on the American homeland, even a nuclear blast. He reminds us that during the Bush years, "the media blissfully endangered America's safety for the pleasure of striking a blow at a president it despised. ... Even when there's no allegation of wrongdoing, it seems that many newspapers today take a perverse pride in revealing U.S. intelligence secrets."

It's these repeated actions by papers like the New York Times exposing and destroying our anti-terrorist programs (and in the case of the Los Angeles Times, tattling about how our government encouraged defectors from Iran's nuclear program) that cries out for censorship, Blankley argues. It's not enough to hope these newspapers will now cooperate with the Obama administration when it wants them to keep its actions secret. Blankley believes we need to establish the principle, protected by law, that our nation's freedom of the press should not extend to telegraphing our nation's intelligence secrets to the terrorist enemy.

As the late Tony Snow remarked when he was White House press secretary, "The New York Times and other news organizations ought to think long and hard about whether a public's right to know, in some cases, might overwrite somebody's right to live."

Blankley trenchantly recounts left-wing hacks like CNN's Jack Cafferty and Newsweek's Jonathan Alter finding the seeds of a "full-blown dictatorship" in the Bush White House, and snarling Joe Conason claiming Bush was headed toward an "authoritarian peril." Blankley dismisses these claims for showing "an embarrassing ignorance of the history of executive authority."

This is censorship: President Lincoln shut down dozens of newspapers and imprisoned their editors. During World War I, President Woodrow Wilson's Sedition Act banned "uttering, printing, writing or publishing any disloyal, profane, scurrilous or abusive language about the United States government or the military." At least 75 periodicals were banned by the postmaster general. During World War II, President Franklin Roosevelt gave FBI director J. Edgar Hoover the power to censor all news or communications entering or leaving America. Blankley notes FDR repeatedly asked his attorney general, Francis Biddle, "When are you going to indict the seditionists?"

These presidents are hailed by Obama supporters as all-time greats, not as full-blown dictators.

By contrast, during those allegedly dictatorial Bush years, our national newspapers proudly published op-eds by founders and supporters of terrorist groups like Hamas and Hezbollah. Blankley invites us to imagine opening the paper during World War II to find "a direct appeal to the American people from a top official of Nazi Germany's Propaganda Ministry, or an entreaty from an Imperial Japanese pilot suspected of participating in the attack on Pearl Harbor." It never happened, because censorship policies prohibited it. Look at the degree to which the pendulum has swung: Despite this free publicity for Islamic terrorists, liberal newspaper editors and leftist book authors bemoan the last eight years as a dark time of muzzling opposition.

President Obama has already signaled that it isn't Hamas chieftains he wants to silence, but conservative talk-radio hosts like Rush Limbaugh. Will this new age's "seditionists" be citizens like Limbaugh or Blankley, voices that threaten the "smart power" momentum of Obama as he goes about unraveling the War on Terror?

FL Sheriff Has Some Advice for the 'Millions' of People Moving to the State on How to Vote
Townhall
Columbus PD chief explains to reporter why cops aren't trained to 'shoot somewhere that would not result in a fatal wound'
Twitchy
Joe Biden Releases an Absolutely Disgusting Statement on the Columbus Police Shooting
Redstate
Insanity Wrap #191: Did Jury Intimidation Play a Part in the Chauvin Verdict?
PJ Media