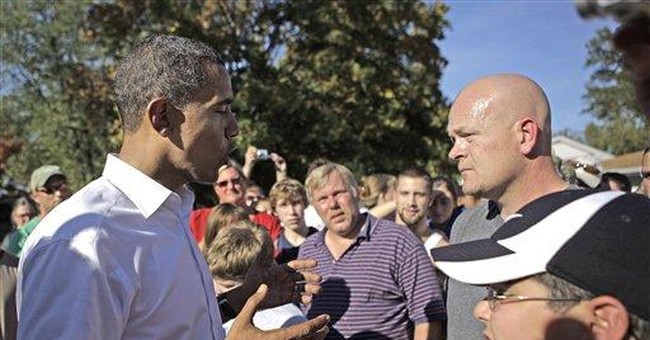 Back in 1964, Lyndon Johnson and his hatchet man Bill Moyers made the infamous "Daisy" ad charging Barry Goldwater would cause a nuclear war, and it became a massive media story. Reportedly the ad ran only once, and yet everyone came to know about it, thanks to the press. In 1976 and again in 1980, the Democrats worked overtime suggesting the election of Ronald Reagan would trigger a military calamity, so much so that in their 1980 debate, Reagan joked that Jimmy Carter was cartooning him as a "mad bomber." The media couldn't get enough of that narrative, either.

So what happens when a vice-presidential candidate makes the gaffe to end all gaffes and declares that his own running mate will trigger an international crisis? In the Year of The One, it's yet another controversy that is virtually ignored by a national press corps that has become an institutional embarrassment.

The next day he did it -- again! This time in Seattle he declared, "Mark my words. Mark my words. It will not be six months before the world tests Barack Obama like they did John Kennedy. The world is looking Remember I said it standing here, if you don't remember anything else I said. Watch, we're gonna have an international crisis, a generated crisis, to test the mettle of this guy."

What do you suppose would be the reaction had this statement been made by Sarah Palin about John McCain? Never mind that within minutes that soundbite would appear in Obama campaign ads coast-to-coast. It would also, and quite correctly, be the top news story of the day. Look at the record.

Front-page story in the New York Times? Try page A-18. Above-the-fold in the Washington Post? Try a tiny paragraph on page A-4.

What about the "news" networks? The story broke at 7:35 a.m. Eastern on ABC's own Political Radar blog, yet ABC ran nothing on Monday, not on "Good Morning America," or "World News" or "Nightline." NBC made a mention of the controversy on its news Monday night -- but edited out the controversial elements in the Biden quote.

It sounds ridiculous, but it's true: Joe the Plumber has drawn tougher scrutiny than Joe the Bumbler.

The networks were much more interested in casting Colin Powell's endorsement of Obama as a truly earth-shattering event, a real "game changer," even if they would never acknowledge the race is tight enough to require changing. They all cited CBS's glue-sniffing poll showing a 14-point Obama lead. These obedient publicists would not cast Powell as a calculating Beltway power player viciously backstabbing his career-makers -- Reagan, Bush I and Bush II. It was no betrayal, unlike the way they pounded "Zig Zag Zell" Miller for endorsing Bush four years ago. Tom Brokaw, the host of Powell's liberal coming-out party, boasted after the show he was a world-renowned figure with a "gold-plated military and national security resume."

Minutes after Powell's allegedly dramatic announcement of something he's discussed with Obama for months, NBC's Andrea Mitchell said it was "very powerful," and Newsweek editor Jon Meacham oozed that it was a "seal of approval from the most important military figure of the age." MSNBC created a special Sunday cheerleading edition of "Hardball," so that Chris Matthews could tingle in his Sunday best. "Obama gets the endorsement of the year!" ABC and NBC both led their Sunday night newscasts with it. ABC's Dan Harris called it a "major endorsement by a major Republican."

Baloney. Powell sounded like a former Republican angrily walking out the door: McCain was an unready mess on the economy, his Supreme Court nominations would be horrendous, and the Palin pick was just plain embarrassing.

The Monday morning network shows were absolutely aglow. On ABC's "Good Morning America," Diane Sawyer sounded like a Sixties teenager at a Beatles concert: "This morning, Sen. Obama's banner weekend: Record-breaking crowds, cash and the endorsement heard around the world." She called the endorsement a "booster rocket." The screen graphic screamed: "Obama's Best Weekend Ever? Powell and Donors Boost Obama."

No one in Network Land cared that Obama's enormous wad of September cash would have been scoured as "obscene" if Bush had raised it in 2000 or 2004. Their only principle is bullying the voters into putting Obama and his gaffe-prone running mate in power.