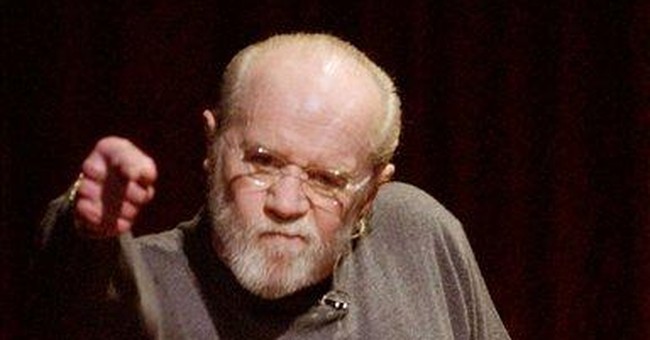 Everyone loves a person who makes you laugh, and you naturally mourn when a comedian passes away. George Carlin made a lot of people laugh with his observational humor, and we're saddened by the loss. But the media appreciations of Carlin hail him for his daring in "crossing the line" of good taste. This was not something to be celebrated.

The nation's top newspapers added some depth. Paul Farhi in The Washington Post noted two Carlin comic personalities. There was Gentle George, the absurdist who made fun of language, even the sound of words like "yogurt." He was riotous fun. Then came Angry George, the one who "sprayed comic acid on whatever moved across the front page."

"Sprayed comic acid" is a perfect turn of phrase. In the early decades of television, comedians were "insulting," but that word necessarily must contain the quotation marks. Think of Don Rickles during the Dean Martin roasts. He savaged his targets mercilessly, and the more "insulting" the broadside, the more his victim (and his audience) roared with laughter. Rickles didn't mean a word of it.

But Carlin came armed with insults that were meant to wound. He meant to pulverize politeness into dust.

Gentle George came first, with his goofy Hippy-Dippy Weatherman, with this overnight forecast: "Continued mostly dark tonight turning to widely scattered light in the morning." But he began to hate the "conservative people" who liked this "superficial" humor. Angry George became the voice of the American counterculture that loved to pick a fight on the "Seven Dirty Words" and derived great joy in offending.

Carlin's 2004 book was titled "When Will Jesus Bring the Pork Chops?" In an interview on NBC, Carlin recounted how "it offends all three major religions, plus the vegetarians. So there's a bonus in there." A eulogist in USA Today warmly noted that no one should "go all sappy and commit the sin" that Carlin the religion-mocker has "joined some celestial Friars Club in the sky."

But it wasn't just religious people that Carlin loathed. Carlin sounded like he hated everyone. One of his last HBO specials was called "Life Is Worth Losing," a sour rebuttal to Bishop Fulton Sheen's old TV show "Life is Worth Living." He "joked" of an "All Suicide Channel" on cable TV, and how you could talk stupid humans to jump into the Grand Canyon during sweeps periods. The original title was slated to be "I Like It When A Lot of People Die." He was talked out of that title once after 9/11, and again after Hurricane Katrina.

The New York Times obituary captured how Angry George went seriously awry. Carlin's celebrated "Seven Dirty Words" routine came in the 1970s, but from the 1990s forward, Carlin became "the comedy circuit's most splenetic curmudgeon, raging over the shallowness of a 'me first' culture," even mocking baby boomers "who went from 'do your thing' to 'just say no' " and "from cocaine to Rogaine."

That last line is especially odd, considering Carlin overcame a cocaine addiction. Apparently, the Rogaine line was just too clever for him to bow to any of his own life experience. Is a transition from cocaine to Rogaine really a step backward?

But this was nothing compared to several "jokes" he unspooled in 1999. He mocked the response to the massacre at Columbine High School: "The artificial weeping in this country, this nationwide mourning for dead people ... and these ribbons and these teddy bears and these little places where they put notes to dead people and all this s-t [are] embarrassing and unnecessary, and it just shows how ... emotionally immature the American people as a class are."

He even displayed an appetite for terrorism: "The very idea that you can set off a bomb in a marketplace and kill several hundred people is exciting and stimulating, and I see it as a form of entertainment Airport security is a stupid idea, it's a waste of money, and it's only there for one reason: to make white people feel safe."

These lines were not designed for laughs: They're not funny. They will probably not make the highlight reels when the Kennedy Center awards Carlin their Mark Twain prize for humor in November. So why laud them for "making people think"? People ought to think twice when they honor a man for being an "icon of free speech."

In the sad final analysis, Carlin betrayed the promise of the hippie counterculture, that the establishment would be wiped away, and only love and peace would remain. He joked that inside every cynic is a disappointed idealist. But hunting for idealism in Carlin's late work would be a search for a blade of hay in a large mountain of needles. In the end, George Carlin was a comedic genius who lost his sense of humor.