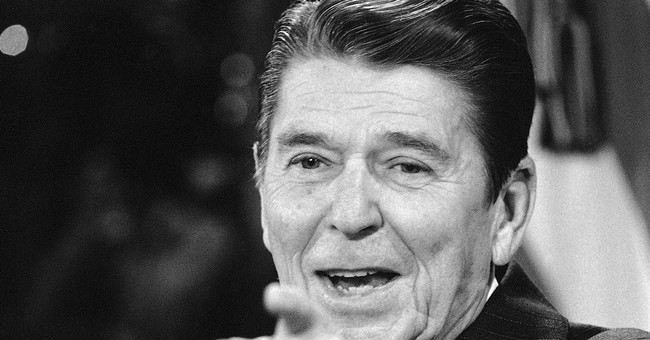 It's been 10 years since Ronald Reagan passed away, but one horrible myth about him will not die. When he passed, The Advocate magazine published an essay by radical gay playwright Larry Kramer titled "Adolf Reagan." The rant began: "Our murderer is dead. The man who murdered more gay people than anyone in the entire history of the world, is dead. More people than Hitler even."

In Kramer's fever swamp of a brain, Reagan caused AIDS. He reveled in its fatalities. Now HBO is honoring Kramer's unceasing hatred by making a TV movie out of his hate-filled 1985 play/jeremiad "The Normal Heart." The movie ends with a "historic" note bashing Reagan some more:

"President Ronald Reagan mentioned AIDS publicly for the first time Sept. 17, 1985, vowing in a news conference to make AIDS research a 'top priority.' Reagan's proposed budget for 1986 actually called for an 11 percent reduction in AIDS spending. By the end of 1986, there were 24,559 reported deaths." (Which is higher than all the Jews murdered by the Nazis?)

This is the stuff of nuttiness. It's bad enough that a magazine would publish this bile; it's unconscionable that a TV network produce a movie "based on real events" furthering it.

The real Reagan record on AIDS is different than the seemingly never-ending mud-slinging. His Department of Health and Human Services secretary called it a "top priority" in 1983, when the disease was so new that few people even understood what was happening. AIDS funding skyrocketed in the 1980s, almost doubling each year beginning in 1983 -- when the media started blaring headlines -- from $44 million to $103 million, $205 million, $508 million, $922 million and then $1.6 billion in 1988.

Now, try finding Walter Mondale "mentioning AIDS publicly" when he ran against Reagan in 1984. It didn't come up in the presidential debates. It's nowhere to be found in his 1984 convention speech. A Nexis search of the Washington Post and The New York Times in 1984 doesn't locate a Mondale quote on AIDS.

Kramer's enough of a lunatic that in 2011, he was recklessly blaming every president from Reagan to President Barack Obama for AIDS in a letter he passed out to people attending a revival of "The Normal Heart." It said: "Please know that beginning with Ronald Reagan (who would not say the word 'AIDS' publicly for seven years), every single president has said nothing and done nothing, or in the case of the current president, says the right things and then doesn't do them."

Those in the press giving oxygen to this character assassin deserve the highest possible condemnation.

In 2006, as The New York Times honored Kramer by putting him in a panel discussion on the 25th anniversary of the first Times article on AIDS, he distributed typically crazy remarks in advance, calling for "Nuremberg trials" to hold not only Reagan, but the owners and editors of -- how's this for gratitude? -- The New York Times to be tried like Nazi war criminals for the AIDS holocaust.

They remember none of this at the Times. A few days ago, reporter Patrick Healy honored him in an article titled "A Lion Still Roars, With Gratitude." Healy warmly recalled Kramer as "the most strident, scolding voice in New York City (in the world, really) on behalf of gay men infected with HIV" in the 1980s.

Healy actually portrayed Kramer as some sort of prophet. He reported that at a special screening for the HBO film at the Ziegfeld Theater in New York, the film's director, "Glee" creator Ryan Murphy, led "a thousand-member audience" in a standing ovation for Kramer. "Larry, before we begin this film, I only have one thing to say. You were right."

Kramer has been not only wrong, but factually unglued. But none of this apparently matters. One might argue that in the 1980s, when the death toll was climbing and the hopelessness was deepening, that Kramer's rants of "You're killing us" spurred action. But you can't be a newspaper or a movie channel that claims to care about facts and history (and civility), and refuse to acknowledge how deeply wrong Kramer was and continues to be, screaming that Reagan is worse than Hitler.

Ends don't justify means. But it's worse than that. This is pure hatred.