Brad Slager
|
Posted: Jan 19, 2021 12:07 PM
Share   Tweet
The opinions expressed by columnists are their own and do not necessarily represent the views of Townhall.com. 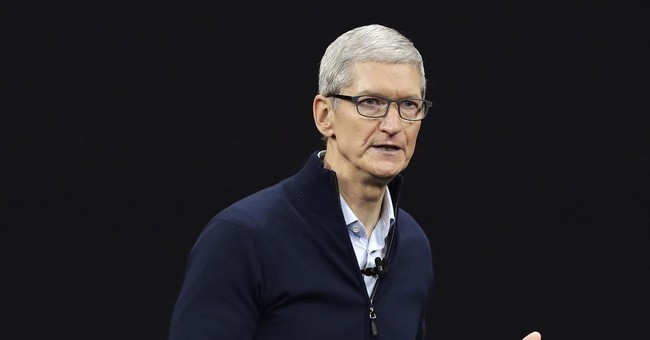 Much of this country is still sitting back in an attempt to absorb the ramifications from the unprecedented actions of a social media outlet, Parler, being obliterated from the internet. The claims behind the decision have been flimsy and the moves behind the scenes were so obviously coordinated that there were already questions swirling about the legitimacy of the power wielded by Silicon Valley companies. The issues may turn darker, thanks to Apple CEO Tim Cook.

On Sunday, Cook was on a barnstorm schedule, hitting numerous news outlets to make an announcement regarding his company’s planned rollout of a new initiative. As these appearances were scheduled weeks back, his PR became diluted by the need to discuss the decision by his company to target Parler, following the events at the Capitol on January 6. It did not help his cause, nor that of the other tech giants involved in recent moves of suppression.

Cook sat down with Chris Wallace on "Fox News Sunday" and described the thinking behind the call for Parler to be removed from their App Store. “We looked at the incitement to violence that was on there, and we - we don’t consider that free speech and incitement to violence has an - has an intersection.” This is a unique distinction he makes. Considering one of the prevailing arguments from the left supporting the removal of Parler -- that this is a private company acting as it sees fit -- cites federal independence, here is Cook making what is sounding like a governmental decision. What has imbued him and his company with the power to make determinations on what qualifies as free speech?

When he spoke with “CBS This Morning,” Cook sounded less like a corporate suit than he did an uniformed authoritarian. “I think it’s key that people be held accountable for it. This is not something that should skate. This is something we’ve got to be very serious about, and understand, and then we need to move forward.” His desire to deliver accountability continued, in this amazing passage:

“I think no one is above the law. That’s the great thing about our country, we’re a rule of law country. I think everyone who had a part in it needs to be held accountable. I don’t think we should let it go. I think holding people accountable is important.”

Tim is now involved in law enforcement? This essentially erases any of the “private company” talk, corporations are not in the business of meting out justice. Cook’s line of thinking here is enforcement of governmental standards, which now invites attention where these tech titans do not want people sniffing around. Note how President Trump was almost uniformly muzzled across numerous platforms in simultaneous fashion, and that Parler was targeted by Apple and Google on the same day, immediately followed by Amazon announcing it was shutting down its hosting services.

The collusion between these monolithic corporations is beyond evident. The claims of illegal plotting on Parler are not only followed with little evidence, but where are the criminal charges of seditious acts brought by federal law enforcement? Now consider the result they delivered; these companies all acted in concert to target one political side. Tim Cook has just asserted, with his talk of enforcing laws, that he is acting out on behalf of federal standards, not on corporate policy. This lands their actions squarely into the anti-trust arena that none of them want to find themselves in regarding their protections.

Another problem arises with the accusations leveled at Parler. Since the content on its platform was declared a valid reason to have it shut down, what then happens to Twitter? Not only was that site also shown to have the plotting of the Capitol attack taking place, it too shares hosting with Amazon’s AWS, seemingly justifying that it be shut down in like fashion. Further, that is not an isolated case.

Facebook COO Sheryl Sandberg gave an interview last week where she asserted the plotting of the Capitol attack did also take place on her site. However, she weakly attempted to push off responsibility solely onto Parler, because supposedly her site at least tried harder to remove violent dialogue. This in no way absolves Facebook. Despite the claims to the contrary, Parler also had/has terms of service standards against violent speech, proven by some of the scant examples of the plotting shown on the web derived from accounts Parler had disconnected, due specifically to the displayed content.

This might not be the end of the self-created trouble. National conservative pundit Dan Bongino described on an episode of his broadcast, days after the attack, that Apple had sent Parler an email explaining the decision to shut it down. (Bongino is an investor in Parler.) The email, according to Bongino, declared that Parler was culpable in the seditious activity because it did not take proper actions to remove the content. Parler, as Apple alleges, was responsible for the content that appeared on the platform.

This...this might be the distinction none of these tech giants want to be brought into the discussion. If they are to declare Parler solely responsible for the content then it cuts directly into the arena of the infamous Section 230 protections these companies enjoy. For years the social media platforms have eluded responsibility and lawsuits under the shield of 230, because they are not held responsible for the third-party content on their sites, as they are not declared to be publishers.

If Apple had in fact placed the specter of content responsibility onto Parler, it is declaring that the site was supposed to have acted in an editorial fashion. Given Parler operated in the exact same capacity as, say, Twitter and Facebook, this becomes something of a tacit admission that they too are now editorially responsible, i.e. they are publishers. This is not at all what they will want to become.

The irony behind Tim Cook’s ill-advised commentary is that it springs out of a clear bias from the technology sector. After years of claims made that the tech companies were targeting and squelching conservative voices, a common retort was that conservatives should develop their own platforms, if they feel so oppressed. Well not only had they done so, but it became far more than just viable -- at the time Parler was shut down it was listed among the top downloaded apps for weeks.

First conservative voices were criticized, then they were scorned as they moved to another arena, and once they became successful elsewhere, they had to be targeted for removal. It is clear these monolithic corporations acted in tandem, and there is no debate the intent is to silence those from only one side of the political landscape. Given that the other platforms are equally culpable and share the same framework in the laws for their content means that these giants may have a reckoning coming their way.

That it arrives at the behest of their own actions would be the most agreeable form of justice, should it ever play out.