Why Halle Berry Was Forced to Turn Down An Acting Gig

Brad Slager
|
Posted: Jul 08, 2020 11:55 AM
Share   Tweet
The opinions expressed by columnists are their own and do not necessarily represent the views of Townhall.com. 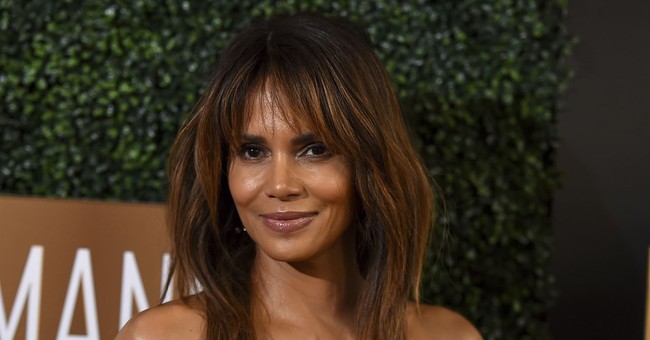 And you thought winning that award meant she had the skills to perform.

Once again we are watching as someone in entertainment has had to recoil when they were "revealed" to have said something insensitive regarding an upcoming film role. This time it was Halle Berry, who had the temerity to suggest that she was in possession of the acting skills needed to portray an individual who is transgendered. She was rapidly corrected on her insurrection, and she has properly apologized to the digital horde.

Over the weekend it was largely missed, amid racist fireworks and hateful protections of historical landmarks, when Halle sat for an online interview for Instagram Live. During the session she explained how she was excited for an unnamed film in preproduction that she was considering as an upcoming role. It would be the character of a transgendered man, a woman who would be transitioning to a male. The backlash was swift.

The news was met with a wave of criticism on social media with people highlighting the ongoing problem in Hollywood of a cisgender actor playing a transgender person. There was also widespread criticism that Berry repeatedly misgendered the character she was set to play in the interview.

Looking to first address the last sentence, the accusation that Halle Berry somehow "misgendered" in her comments is perplexing. We have been told that an individual’s gender is a decision for them to make. Here Berry is referring to a fictional character -- who can say what the character would be declaring? There is no script to speak of, and no story cited, so for anyone to declare the gender of the character means they are in the practice of othering...while in the process of accusing intolerance.

The concept of an actor being incapable -- or not even permitted -- to play a role is one of growing absurdity. It used to be that actors could take on the persona of just about anyone, as that is a skill imbued in the craft. But now we are entering an era when a specific role can only be played by a person of that category. This leads to a reality that there will be less a need for performers and artists and instead just having people occupying a category.

This same action took place when Scarlett Johansson was going to perform the lead in a transgender role for a film called "Rub And Tug’’. A loud backlash rose on social platforms and she was cowed into stepping down from the role. This also meant that, as the producer of the film, her departure led to the project halting entirely. A film with a possible role to broaden transgender issues now will not have any transgender exposure at all. Those upset at the lack of work for a trans performer no sees no trans performer working, and no trans project at all.

The confusion and muddying of the lines established becomes a potential minefield. If a character is in transition, and they are of the sort to declare they are a woman, then should it not be acceptable to have an actress -- a woman -- portraying them? Is there a line crossed if a trans performer who states they are a man plays the role of a trans character who identifies as a woman? A trans character that identifies as a woman should not be played by a trans who identifies as a male, but should be acceptable to be played by a cisnormative woman, if the rules are followed here. This is the realm of talk this nature leads us to at some point.

If anyone thinks this is an overreaction or an uncaring opinion, we saw similar arguments made over less controversial portrayals. When actor Brian Cranston appeared in "The Upside" last January there was an uprising of opposition because he was playing a wheelchair-bound wealthy character who hires Kevin Hart as a personal assistant. The role should have been played by a true wheelchair-bound actor, went the complaint.

An able-bodied actor is forbidden to play a role in a wheelchair, but a handi-capable individual is unable to play an able-body role. While it is fine to encourage more roles for actors in segmented demographics the reality is few would have the influence Brian Cranston brought, the likely driving force behind his casting. Now as people demand a trans-performer be cast for a character you need to ask, how many of those have the clout and audience appeal of an Oscar-winning actress?

This brief social dust-up underscores so much that is wrong with the thinking, and it also represents what Hollywood is facing for its future. Where do the lines get drawn? In declaring who must take this role we watch as a female POC is being denied the work, another demographic challenge that Hollywood has been battling for years now. Studios are fast approaching the moment when they will need to prioritize which social sub-group they will offend when it comes to casting.

It is hard to say at this stage if this project was dependent upon or counting on the star pull of Halle Berry. It might very well find the backing and achieve success with the "proper" person in the role. But there is another danger if this is a new policy strictly followed; the loss of future roles for transgender performers. If it becomes the standard that only trans performers take on trans roles then traditional gender roles can only be played by those filling that description. A strict adherence will likely close more doors to opportunity than the activists realize.