Bob Roberts
|
Posted: May 03, 2018 12:01 AM
Share   Tweet
The opinions expressed by columnists are their own and do not necessarily represent the views of Townhall.com. 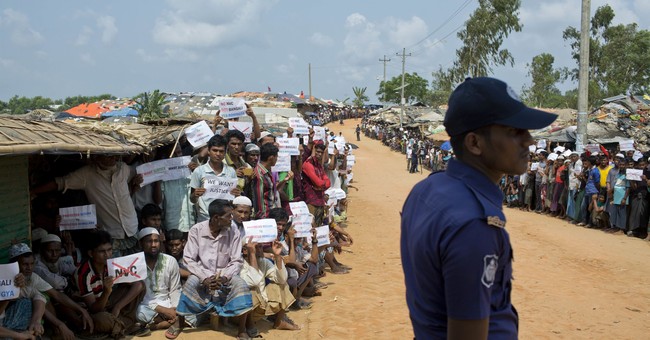 Over the course of my missionary experiences around the world, I have visited many poor and desperate places. However, nothing prepared me for the almost total loss of hope I saw in the eyes of refugees when I recently visited Bangladesh as a participant in a major interfaith delegation. The horrific stories of atrocities committed against a minority Muslim population within Myanmar (also known as Burma) named the Rohingya are slowly but surely making headlines around the world. The Rohingya have been subjected to violent persecution and forced displacement for years at the hands of the Myanmar government led by its military forces. Yet, until one personally witnesses their unending misery and despair as I and my delegation colleagues did, it is unfathomable to imagine the depth of reality for this innocent people group. When faced with such reality, it is hard for your conscious not to be jolted with some natural, common-sense reactions, namely, questions such as what can I personally do to help these innocent people, and what can my country do as well?

The stories of complete sadness and brokenness are present everywhere in Myanmar. Religiously-identifiable groups are being violently attacked by the Myanmar military, such as the bombing of Christians, yet the scale and intensity of the targeting against the Rohingya people is unprecedented in this region—approximately 700,000 Rohingya have fled to Bangladesh for sanctuary. I spoke with a Rohingya woman who used to be a professional seamstress in Sittwe, the capital of the Rakhine province, which is the traditional home of the Rohingya. In 2012 she, along with 150,000 people, were uprooted and summarily marched off to camps by the Myanmar military. She was eventually given permission to leave the internment after 5 years in detention with specific conditions, namely that she accept a state-issued ID card declaring that she entered Myanmar illegally. This happened despite the fact that her family, along with the rest of the Rohingya people, have lived in Rakhine for as long as anyone can remember. The government’s policy is one of total erasure, falsifying history itself to eliminate any trace of the Rohingya from their ancestral home. Rohingyas are indigenous people of Myanmar living in their ancestral land. They were always citizens until a military government took away their citizenship in 1982.

Her story shook me to the core. It showed me, more vividly than any news story could, the terrifying truth that these people are being systematically exterminated, down to their very history. Each day, however, more and more of the international community is waking up to the sickening truth that this is a genocide against an innocent people group. If this is not a genocide, I cannot imagine what is a genocide.

Thankfully, leaders in our United States government have been vocally raising alarm over this issue. The U.S. House of Representatives overwhelmingly passed a resolution last December firmly condemning the ethnic cleansing of the Rohingya and calling for an end to the violence.

A potential legislative framework for action, the Burma Human Rights and Freedom Act of 2018 (S.2060), lays out a broad plan to address the crisis that includes generous humanitarian assistance, full investigations into the root causes of the human rights violations, and economic sanctions against the people and institutions responsible for driving it. However, the legislation has hit a roadblock. After its introduction by Senator John McCain of Arizona and its unanimous bipartisan passage through the Senate Foreign Relations Committee early this year, S.2060 awaits floor action. Congress can make a strong statement to the world that Myanmar’s actions are unacceptable. Yet, Senate Majority Leader, Mitch McConnell, has not made clear his reasoning for not scheduling floor debate in the U.S. Senate for its timely consideration.

So, I must ask: what is the holdup, Mr. McConnell? Will you continue to stand in the way of justice, of compassion, and the protection of human life? Or will you champion these values that, as an American, you surely hold dear?

As a nation, have we not always believed it to be our moral duty to do all we can in our power to address forces who commit such atrocities and are pursuing pure evil against innocent people? As the leader of the democratic world community, the United States has a duty to condemn those who flagrantly violate the commitment to human dignity and basic human rights. It is incumbent upon our national ideals to set a powerful example for the world.

Senator McConnell, I sincerely hope you will choose to do the right thing and allow the full Senate to vote on S.2060. As Americans, we are in the unique position to highlight the plight of the Rohingya, provide aid where possible, and punish bad actors. It is time for Senator McConnell to be the Majority Leader of the United States Senate and lead by allowing S. 2060 to be considered by the full United States Senate.