Bob Beauprez
|
Posted: May 30, 2020 12:01 AM
Share   Tweet
The opinions expressed by columnists are their own and do not necessarily represent the views of Townhall.com. 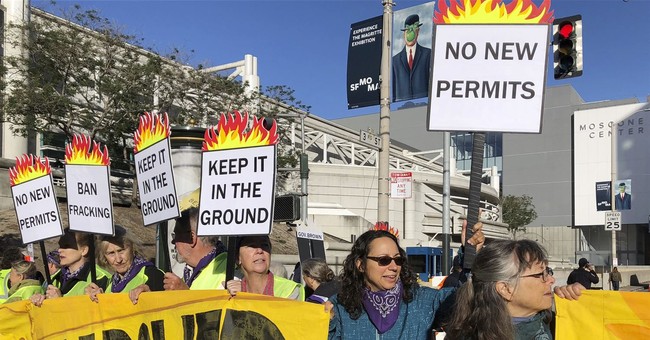 The coronavirus won't destroy America's energy industry. But Democrats might.

Progressive lawmakers like Senator Bernie Sanders have long called for a nationwide ban on fracking. But even Joe Biden, the "moderate" Democratic apparent nominee, recently seemed to embrace this radical idea.

The oil and gas industry has already taken a big blow to the gut. Because of reduced demand caused by lockdown orders nationwide and a price war between Saudi Arabia and Russia, the unthinkable happened in April when an oil futures contract sank into negative territory. In my home state of Colorado, hundreds of wells have been abandoned and many small operators are struggling to stay afloat.

Already shattered by COVID-19 lockdowns, our economy can't afford another shock. But that's precisely what a fracking ban would deliver in the form of mass layoffs and skyrocketing energy costs.

To make matters worse, a fracking ban would reverse America’s ascendance to energy independence and once again jeopardize our national security. This policy would cause problems in the best of circumstances. In the wake of a global pandemic, it could wreak havoc.

Thanks in part to fracking, the energy industry has done wonders for the U.S. economy. Oil and natural gas firms support over 10 million American jobs, nearly 6 percent of the nation's total employment. The energy industry also supports over $1 trillion in annual economic activity and accounts for almost 8 percent of U.S. GDP.

A fracking ban would reverse these gains and then some. Banning fracking and drilling on federal lands and offshore territory as promised by would trigger a recession, according to a 2019 study by OnLocation. All told, a fracking ban would reduce cumulative GDP by $7 trillion over the next decade.

Such a policy would eliminate 7.5 million jobs in 2022 alone, a job loss rate nearly three times higher than the Great Recession's worst year. These layoffs would disproportionately affect blue-collar workers. Over 3 million workers in Texas, California, Florida, Pennsylvania, and Ohio could lose their jobs in a single year.

Any shock to the energy industry would reverberate throughout an economy already on life support. Consider agriculture. Farmers rely on natural gas to make fertilizer, and on gasoline and diesel to power their equipment. Under a fracking ban, farms could lose 43 percent of their income by 2030, or $25 billion each year. The cost of farming wheat could spike 64 percent, and the cost of farming corn 54 percent. Farmers would pass these costs onto consumers in the form of higher prices.

A fracking ban would also send energy prices through the roof. Residential natural gas prices could jump almost 60 percent, and electricity prices could climb nearly 20 percent per family annually. Meanwhile, it could cost 15 percent more to fill up your gas tank or heat your home with oil. All told, a fracking ban could cost American households more than $5,000 per year.

To make matters worse, a fracking ban would compromise national security. America currently leads the world in gas and oil development. In less than a decade, a fracking ban would force the United States to rely on foreign suppliers for 40 percent of its oil and 30 percent of its natural gas. This reliance on imported products could leave the United States at the mercy of hostile foreign nations like Russia and the Middle East members of OPEC.

Unfortunately, America wouldn't gain much from these sacrifices. Contrary to what some environmentalists claim, fracking doesn't impede public health. At least 23-peer reviewed studies, 10 research institutions, and 17 government agencies have reached this conclusion.

Thanks to COVID-19, the United States is already facing an economic crisis perhaps worse than  the Great Recession. Banning oil and gas development, which could trigger a recession on its own, is fracking insane.