Iranian Nuke Deal: They can't both be right 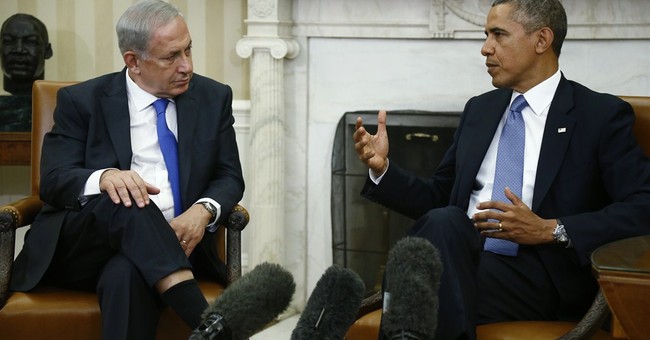 Benjamin Netanyahu calls it a "mistake of historic proportions." Barack Obama says it is "a path toward a more secure world." They can't both be right.

What is clear about the deal Secretary of State John Kerry and his fellow diplomatic power brokers announced from Geneva is that instead of doing everything necessary to keep Iran from developing nuclear capabilities, the international community has just sanctioned the world's largest state sponsor of terrorism as a legitimate nuclear power.

That now self-evident ominous reality is in direct violation of at least five United Nationsresolutions adopted between 2008 and 2012 – the most recent three agreements endorsed by the Obama White House – not to mention the dozens of times Obama promised "to do everything required" to prevent a nuclear Iran.

At best, the deal is a time-out that greatly advantages Iran. Even if the regime complies with the "cosmetic concessions", Iran gets billions in economic sanctions relief in exchange for taking the regime's foot off the accelerator of their nuclear program – but, not shutting off the engine.

Instead of eliminating the nuclear program, the deal enshrines Iran's "legitimacy to enrich uranium." There is no significant dismantling required in the deal, particularly of the Arak reactor, said to be the regime's quickest route to the plutonium needed for a nuke.

Of the agreement, Mike Rogers, Chairman of the House Intelligence Committee, said, "You have now given them a permission slip to continue enrichment."

Anxiety in the Persian Gulf, seemingly at a perpetual fever pitch, is once again on the rise with renewed expectations that the Geneva agreement will spark a long-dreaded multi-national nuclear arms race. The usually reserved Saudis are extremely concerned about "the rehabilitation of its longstanding regional rival (Iran)" and the further destabilizing impact in the Middle East. King Abdullah is reportedly "openly unhappy" with the Obama White House.

Meanwhile, Iran's chief proxy in the region, Syria welcomed the Geneva agreement as "an historic accord." It's pretty easy to connect those dots.

As recently as July of this year, John Kerry's State Department identified yet again Iran as the world's biggest state-sponsor of terrorism. The official annual report "underscored anew Iran's interest in using international terrorism – including in the United States – to further its foreign policy goals."

Less than four months later, Kerry is sharing embraces and posing for pictures with the Iranians in Geneva, and Israel finds itself tossed under the State Department's bus. Israeli Intelligence Minister Yuval Steinitz said the deal was based on "Iranian deception and (international) self-delusion."

Self-delusion seems to be the primary ingredient in Kerry's now fashionable style of diplomacy, which apparently believes any deal is a good deal – if the Secretary says so.

The same regime singled out as the planet's leading sponsor of terrorism, the same regime that occupied more of the UN Security Council's attention for the last decade than any other nation, the same regime that for a generation has repeatedly vowed "death to America, death to Israel" is now to be taken as serious about "freezing its (nuclear) weapons program," as Kerry explained.

Not everybody is as prone to self-delusion as Obama and Kerry, however. Not even some of the President's most ardent loyalists. "Iran simply freezes it nuclear capabilities while we reduce the sanctions," said Democrat Senator Chuck Schumer who was harshly critical of how bad the terms of the agreement are. "It was the strong sanctions, not the goodness of the hearts of the Iranian leaders, that brought Iran to the table, and any reduction relieves the psychological pressure of future sanctions and gives them hope that they will be able to gain nuclear weapon capability while further sanctions are reduced."

That's Schumer's polite way of telling Obama and Kerry that, "The Iranians are playing us for fools!"

Peter Brookes, Heritage Foundation Senior Fellow for National Security Affairs and Contributing Editor to A Line of Sight, worries that the Iranian nuke deal may be so destabilizing to the region and so threatening to Israel's existence that instead of forestalling a war, the deal may hasten it. "Observers are nervous that Washington is planning to cut a 'feel-good' deal with Tehran, allowing for some diplomatic happy dancing, a declaration of 'peace in our time!' and title to a long-illusive foreign policy victory (for the Obama Administration)," Brookes opinedshortly before the Geneva agreement was announced. Indeed, the White House now insists this preliminary, short-term deal with Iran is a path to a "more secure world". Brookes believes "that may not be the case at all."

Time will tell and history will record who was right. But, what is already clear is that the nations that are usually our friends are deeply troubled and our sworn enemies are rejoicing. Such is the "transformational change" Barack Obama brought to the White House.